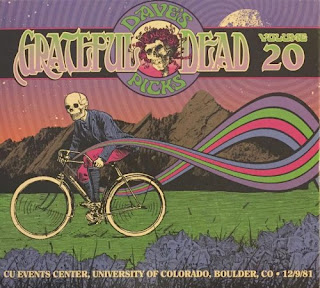 I am always happy when a new Dave’s Picks volume arrives in the mail. Volume 20, the final set of 2016, contains the complete show that the Grateful Dead performed on December 9, 1981 at the University of Colorado in Boulder. Yes, some early 1980s Grateful Dead, a period that isn’t often represented by these concert releases. As we desperately desire some escape from the current political landscape, we can still turn to the Grateful Dead for refuge. And interestingly this show was from the beginning of another horrific era, that of the lousy bastard Ronald Reagan, who’d also promised to “make America great again.”

The first disc contains most of the first set. The band gets things going with “Cold Rain And Snow.” “Well, I married me a wife, she’s been trouble all my life/Run me out in the cold rain and snow.” Jerry is so passionate when he says he’s not going to be treated that way, and we raise our own voices with his. We aren’t going to be treated this way. The crowd sounds excited as the band tunes for “Jack Straw.” The Grateful Dead were basically always going for it, though they didn’t always get there. Sometimes they completely fucked up, getting lost along the way. This “Jack Straw” is one of those times. It seems they lose track of where they are, and that leads them off the rails. Still, they keep at it, not abandoning the line completely, and so there are a couple of powerful moments near the end. But they need to regroup, and so go into the mellow, reliable “Friend Of The Devil.” And it’s beautiful, the vocals sounding so good. The jam at one point features Brent prominently on keys, before we get that great stuff from Jerry on guitar. Just wonderful. This version has excellent peaks and valleys, everything going just exactly right. The Dead are back on track, no question. Wanting to keep it going, they slide right into “Little Red Rooster,” featuring some delicious stuff on keys over that good groove. This is a really fun version of “Rooster,” and they keep the jam going.

I love the little “Bird Song” tease before they actually start the song. This version feels a bit faster than most versions I’ve heard, and it contains an excellent jam that should have all Dead fans smiling. Bob says, “This next one’s dedicated to our crew,” and the band goes into “Mama Tried.” The sound is suddenly a bit weird on this one, the vocals sounding like they’re in a cavern, where they’d been so clear up until now. “Mama Tried” leads directly to “Mexicali Blues.” The sound is still odd. It’s like we switched from soundboard to audience. And then suddenly, nearly two minutes in, the sound switches again, becoming clear once more. The change is rather dramatic.

This disc also contains good versions of “Candyman” and “Cassidy,” the vocals sounding so sweet on “Let your life proceed by its own design.” And during the jam, the music surrounds me, such a great feeling, just what I’m looking for, just what I’m needing. Interestingly, they do two Bob songs in a row, following “Cassidy” with “Looks Like Rain.” I don’t recall hearing any other versions where Bobby spells “R-A-I-N,” and it’s weird. He does it a couple of times. “I wish these fucking clouds would just blow away.” The first disc ends with the opening of “China Cat Sunflower.”

The second disc starts where the first left off, with “China Cat Sunflower” into “I Know You Rider” to end the first set. It’s a fairly short “China Cat,” with little jamming, but a nice, smooth transition to an energetic “Rider.” “See you in a minute or two,” Bob says. Well, it was probably a bit longer than that, but yeah.

The rest of the second disc is the first hour or so of the second set, starting with “Scarlet Begonias” into “Fire On The Mountain,” a pairing that was always cause for happiness and dancing among the audience, and these versions got me dancing around in my apartment. Is it me, or does the sound get weird again in the “Scarlet” jam? Yeah, for like a minute or two, then it’s back to being clear again. Some interesting stuff in this jam, by the way, just before the band slides into “Fire.” I wonder where my “Fire On The Mountain” T-shirt is. I bought it from a guy after a show, and it had a picture of the dragon that’s loose on the town. Hmm, I’ll have to look for that, though it may no longer fit me. This is a really good “Fire.” I particularly like where it goes just before the end.

“Estimated Prophet” has always been one of my favorites (granted, I have a whole lot of favorites when it comes to the Grateful Dead, but still, this is a damn good song), and Bobby really gets into it here. From there, they ease into a sweet, smooth rendition of “He’s Gone.” I love the vocal jam at the end. And then, holy shit, check out that great jam with the prominent keys and drums. This is one of the highlights of the show, and it leads so well into the “Drums/Space” segment. The second disc fades out just as “The Other One” begins to emerge from “Space.”

The third disc opens with “The Other One” thumping and beating and clawing its way out of “Space.” That leads to a wonderful “Stella Blue” that is at times delicate and other times powerful, but always moving. Yes, this is another of my favorite Grateful Dead songs. “It seems like all this life was just a dream.” The band then ends the second set with a couple of rock and roll numbers, “Around And Around” and “Good Lovin’.” The band keeps things lively with the double encore of “U.S. Blues” and “Satisfaction.”