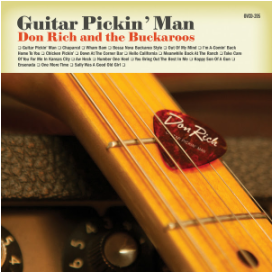 Guitar Pickin’ Man is a new compilation of some great tracks Don Rich recorded as a member of The Buckaroos, the band that backed Buck Owens. And yes, Buck Owens plays on a few of this disc’s tracks. A lot of these songs were written or co-written by Don Rich, some with Buck Owens. A third of the collection’s songs are instrumentals. This CD does contain one track that was previously unreleased, and includes new liner notes by Don’s sons, Vance and Vic, as well as several photos.

This compilation opens with its title track, “Guitar Pickin’ Man,” a fun country song written by Don Rich. “I do everything that I want to/And I do it every time I can/I’m a woman-stealing, double-dealing, guitar pickin’ man.” The version here, “Hee Haw Version,” was recorded on May 22, 1973, and this is the CD’s previously unissued track. It features Jerry Brightman on steel guitar. “So don’t you try to change me, even if you think you can.”

That’s followed by “Chaparral,” the first of the disc’s instrumental tracks. It was composed by Bob Morris and Don Rich, and originally appeared on The Buckaroos’ A Night On The Town. “Bossa Nova Buckaroo Style” is the collection’s most unusual instrumental, dipping as it does (as you’d expect from the title) into bossa nova. There is some great guitar work here. Maybe my favorite instrumental on this disc is “Chicken Pickin’,” which is really cool, with a catchy, playful guitar part. The other instrumental tracks are “Meanwhile Back At The Ranch,” the playful “Aw Heck” and “Ensendada,” the last of which was written by Don Rich and Buck Owens.

“Wham Bam” is another fun country song featuring the line “Wham bam, thank you ma’am,” a line also used in David Bowie’s “Suffragette City” later on. Prior to this Buckaroos recording from 1965, the line was used as the title of a Charles Mingus tune appearing on the 1961 record Oh Yeah.  I’m not sure if that’s the origin of the line or not. If anyone knows, please let me know. I’m curious. “Wham bam thank you ma’am, I’ll be on my way/Thank you , but no thank you, not today/First thing is matrimony and next thing is alimony.” I love the little laugh in Don’s voice on the word “I’ll” in the first line. This track was on the Buck Owens And His Buckaroos album I’ve Got A Tiger By The Tail.

“Out Of My Mind” is one of those delicious sad country songs about unrequited love and pain and threats of going completely mad. “I’ll go out of my mind completely, it’s true/If you don’t start to love me the way that I love you.” Ah yes. “Out Of My Mind” was written by Red Simpson and Don Rich, and is one of my favorite tracks. It was originally included on the 1967 release America’s Most Wanted Band. That’s followed by “I’m A-Comin’ Back Home To You,” which features some nice work on piano. “But now I’m sure that it’s you for me/And none else will ever do/So get your wedding dress on/’Cause when I finish this song/I’m a-comin’ back home to you.” This one was also written by Don Rich and Red Simpson.

“Down At The Corner Bar” is another fun tune about going to the bar rather than going home. It was written by Barney Carl and Johnny Booth, and included on the 1969 record Roll Your Own (and also recorded by Tony Booth in 1972). “And like as not, I’ll have some old floozy in my arms/Down at the corner bar.” Maybe it’s just my mood, but the one that’s really hitting me this evening is the sweet “You Bring Out The Best In Me,” which was written by Bob Morris, and features Tom Brumley on steel guitar. Check out these lyrics: “I used to be a lonely man/Without even one single plan/I didn’t really care before/Who walked in or out my door/Darling, then you came along/Then all my loneliness was gone/Now my life’s more than just a dream/You bring out the best in me.” Wonderful, right? And Don’s vocals are perfect.

I also love “One More Time,” a groovy tune which has some gospel flavor in the backing vocals. This is from the 1970 record Rompin’ & Stompin’ and is a lively number with nice touches on harmonica. The collection then concludes with “Sally Was A Good Old Girl,” the earliest recording to be included here, from the 1963 album On The Bandstand. You’ll be singing along with this one before long. “If you wanted just a kiss or a little bitty squeeze/She was always willing to do her best to please/Yeah, girls were made to love and not made to tease/Sally was a good old girl.”

CD Track List
Guitar Pickin’ Man is scheduled to be released on December 16, 2016 through Omnivore Recordings.
Posted by Michael Doherty at 6:19 PM