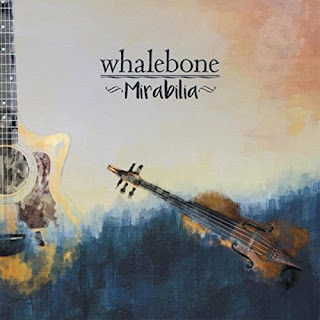 Election day for me was one of shock, disgust, heavy drinking, anger and despair. And as I felt myself slipping more and more toward my worst self, I decided to combat these feelings with the one weapon I know to work, that, of course, being music. The first disc I chose to put on was Mirabilia, the new release from Whalebone. I’m not sure exactly why I chose that CD. It was partly because of its cover, I suppose, but also because it was close at hand, and I was too flustered to go looking through my stacks of CDs for anything in particular. I just needed some good music, and I needed it straightaway. Well, it turns out, Mirabilia was the perfect choice. It calmed me almost immediately, reminded me of the beauty and goodness of people and the world, and how that has a much longer-lasting life than any pseudo-politician. This music taps into something eternal that we all feel inside of us. On a night I thought happiness impossible, this album lifted my spirits and made me smile.

Whalebone is the trio of Steve Downs on guitar, mandolin, bouzouki, bass and percussion; Charlotte Watson on guitar and bouzouki; and Sarah Ibberson on fiddle. They are based in Shropshire in the UK, and their music has a wonderful Celtic sound. Whalebone has been performing for more than a decade, and Mirabilia is the group’s sixth album, following last year’s As Turn The Seasons. All of the tracks are originals, written by the group. All are instrumentals.

The first track, “Anglicana,” eases in, catching our interest with the two separate voices of violin and guitar. And then when the guitars gain in power, the song becomes quite pretty, and also friendly, comforting. Again, exactly what I needed. But even if you are not troubled by the election in the U.S., this music will work its magic on you. “Angelicana” is followed by “Chalk Heart,” which has a slightly more somber tone at its start. But when the fiddle kicks in, we are lifted up with the instrument. “Momentum” then gets going right away, those guitars picking us up and carrying us off into a brighter world. Likewise, “Thynge” has a driving rhythm, like a train venturing confidently into the highlands. This tune should have you smiling even before the fiddle’s voice rises into sky, then joins the guitars in that rhythm. Wonderful stuff to get you grooving. “Butterfly” has a sweeter, more delicate sound, certainly appropriate to its title. Though it isn’t long before the tune takes on a stronger voice. It does feel a bit repetitive at times, but also has some interesting changes.

“Hiraeth” has a beautiful and familiar feel, like revisiting a dance with a childhood sweetheart, and features Charlotte on bouzouki. “Mouse 16” has quite a different feel, like running with someone through the winding, narrow streets of some foreign town. “Lost Borders” is pretty and moving, with some wonderful work on guitar. But perhaps my favorite track is “Floodplains.” It is gorgeous and uplifting, and halfway through goes in a different direction, at one point delivering some excellent work on guitar over a steady, insistent rhythm. The CD then concludes with “Pure,” which is pretty and seems to offer comfort, a warmth, a place to relax for a while.

CD Track List
Mirabilia is scheduled to be released on November 13, 2016 on Two Wild Women Records.
Posted by Michael Doherty at 4:32 PM