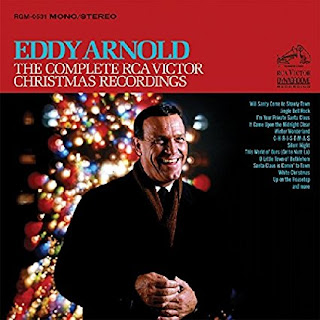 Every autumn brings us the release (and re-release) of many Christmas albums. Boy, has any other day on the calendar inspired so much music? St. Patrick’s Day certainly has the best music of any holiday, but most of it wasn’t composed specifically for that day. Many artists have recorded more than one Christmas record, and such is the case with Eddy Arnold, who released a Christmas LP in 1962, as well as several holiday singles. The Complete RCA Victor Christmas Recordings collects all of Eddy Arnold’s holiday releases from between 1949 and 1967 on a single disc. Here he delivers some of the holiday’s most popular songs, as well as some more interesting, less known tunes. On this disc, he sometimes gives us more than one version of a particular song, and unlike a lot of compilations, these different versions in most cases really are noticeably different. He’s not repeating himself. And while I might not need two versions of “Santa Claus Is Comin’ To Town” or three versions of “C-H-R-I-S-T-M-A-S,” I’m very happy to have the two renditions of “Christmas Can’t Be Far Away” and the two versions of “White Christmas.” He mixes country and pop elements on these recordings, but it is his beautiful voice that is the star here.

This collection opens with the 1949 version of “C-H-R-I-S-T-M-A-S,” a song that Eddy Arnold co-wrote with Jenny Lou Carson. This one is much more firmly in the country realm than some of his later recordings. “When I was but a youngster/Christmas meant one thing/That I’d be getting lots of toys that day.” This compilation includes two more versions of this song, the first from 1950, which features organ, the other from 1962, which uses a different effect on Eddy Arnold’s vocals, and has more of a folk feel.

Eddy Arnold also co-wrote “Will Santy Come To Shanty Town,” along with Ed Nelson Jr. and Steven Nelson. This compilation includes two versions of this song. The first is from 1949, and was the flip side to “C-H-R-I-S-T-M-A-S,” and is a much better song than that A side. “Will Santy come to shanty town/To a poor little boy like me/Will he bring me some toys/Like the other girls and boys.” This is a wonderful country Christmas tune. The second version is from 1962 and is somewhat shorter and more polished. There are also two versions of “White Christmas,” the first, featuring organ, was released as a single in 1950. The second version is from 1962, and begins with guitar. Both versions are good, but I think I prefer the second one.

One of my favorite songs on this disc is “Christmas Can’t Be Far Away,” written by Boudleaux Bryant, who co-wrote the great “Rocky Top” as well as several excellent hits for The Everly Brothers. This song has a sweet vibe, which I love. And Eddy Arnold’s vocal performance is wonderful. “Mom will get that doodad she’s been craving/And Dad will get his usual Christmas tie.” Ah, poor Dad, always so difficult to shop for. There is a second version of this song, a somewhat slower, passionate rendition. I love both versions.

I also love “I’m Your Private Santa Claus,” a fun, playful song with some surprising, perhaps unintentional, sexual innuendo. “On Christmas eve, you’ll find me/Climbing down your chimney/With love and kisses in my pack/And baby, I ain’t climbing back.” That’s followed by another playful tune, “A Present For Santa Claus,” which has a delightful innocence. It’s presented as duet with a child, and actually that’s Eddy Arnold’s daughter singing with him. I love the way she sings lines like, “I’ll give him candy kisses if it won’t seem bold.” I’ll be adding these songs to my holiday playlist.

I also really like his slow, thoughtful rendition of “Jolly Old Saint Nicholas.” And he delivers a really pretty and moving version of “Silent Night.” What a great voice! “This World Of Ours (Cette nuit-là)” is a beautiful song that I don’t think I’d heard before, and again features an excellent vocal performance. This CD also includes two brief spoken greetings, the first a Christmas message, the second a New Year’s message.