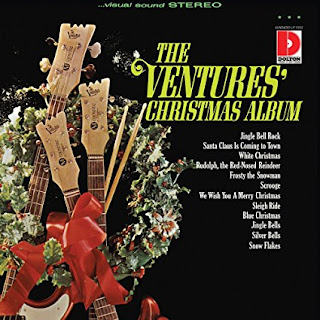 Some of the best Christmas albums are the instrumental ones, in part because a lot of Christmas songs have terrible lyrics. One of the coolest, and more unusual, instrumental Christmas records is The Ventures’ Christmas Album, which has now been released in an expanded edition, featuring both the mono and stereo versions. Though this record has been re-issued several times over the years, apparently the mono version has never before been available on CD. On this album, The Ventures take an interesting approach to some familiar Christmas songs, combining them with pop hits of the day (it was 1965 when the album was first released), hooking you with a well-known bit from a rock and roll song before sliding into the holiday tune.

The album opens with “Sleigh Ride,” which actually starts with the opening of “Walk, Don’t Run,” a song The Ventures used as the title track of their 1960 debut LP. And it’s remarkable how well and how easily they are able to combine the two tunes. And yes, this version makes me appreciate “Sleigh Ride” more than I otherwise would. After all, this is a seriously fun rendition. That’s followed by what sounds like “Greensleeves,” but which is titled “Snow Flakes,” The Ventures’ own take on that traditional song.

The Ventures’ version of “Santa Claus Is Comin’ To Town” opens with the beginning of “Wooly Bully,” a song they covered on another of their 1965 releases, The Ventures A Go-Go. Yeah, this band put out a lot of records; if you include all the live albums and compilations, the total is something like two hundred. Holy moly! So how does a band go about making “Jingle Bells” a cool song? Pair it with Ray Charles’ “What’d I Say.” That’s what The Ventures do here, getting us excited by beginning the track with a bit of “What’d I Say” before going into that overplayed holiday song. Fortunately, they return to “What’d I Say,” using that rhythm under the “Jingle Bells” theme. This is as good as “Jingle Bells” is ever likely to get, folks. They follow that with “Jingle Bell Rock,” which they combine with Chuck Berry’s “Memphis, Tennessee.” Oh yes, help me, information, get in touch with my Marie. And then wish her a happy Christmas for me. The Ventures then do more of a straight forward rendition of “Silver Bells,” giving it a kind of folk-rock vibe at the start, which works quite well. This is one of my favorite renditions of this song.

One holiday song I really detest is “Rudolph The Red-Nosed Reindeer” (you can read my critique of that song here), but The Ventures add some Beatles to it, beginning their version with a bit of “I Feel Fine.” This track, for me, has the most awkward and forced transition, and maybe that’s because The Beatles are one of the best bands ever, and “Rudolph” is one of the worst songs ever. Whatever the reason, this track just doesn’t work for me. They follow it with another of the holiday’s weaker offerings, “Frosty The Snowman,” pairing it with “Tequila.” (Adding tequila to your Christmas celebration is certainly a good idea. It’s hard to imagine getting through the holiday season without it, actually.) They give us a good amount of “Tequila” before going into “Frosty,” and then return to “Tequila” frequently throughout the track.

“Scrooge” is an unusual tune. First of all, there are lyrics. Well, a lyric. The song begins with a shout of “Humbug!” That is followed by a demented laugh. Also, this is an original composition, written by Bob Bogle, Nokie Edwards, Mel Taylor and Don Wilson. It doesn’t quite fit with the rest of the songs on this album, but I like it. They follow that with a good, rather jovial rendition of “Blue Christmas,” which has a bit of that folk-rock feel. They wrap up the album with “We Wish You A Merry Christmas” and “White Christmas.” The mono album is presented first, followed by the stereo version.