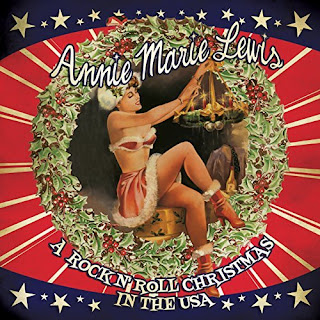 It’s that time of year, there’s no denying it. I was stopped at a light on Gower earlier today, and was surprised to hear Christmas music blaring from the car next to mine. But why not?  There is plenty of bad Christmas music out there, but fortunately there are some good CDs available to help get you in the holiday spirit. Annie Marie Lewis’ A Rock ‘N’ Roll Christmas In The USA is one of the better ones. I do need to point out first that there is an error in the album’s title. It is listed as “A Rock N’ Roll Christmas,” but of course the “N” needs an apostrophe on either side for it to mean “and” (Guns N’ Roses has the same issue, and is one reason I just can’t stand that band). On this album, Annie Marie Lewis delivers rock and roll and rockabilly-flavored takes on some of the holiday’s standard fare. And the music is clearly in her blood; she is the niece of Jerry Lee Lewis, the daughter of Linda Gail Lewis, and the cousin of Mickey Gilley. She is joined by Danny B. Harvey on guitar, piano and bass. This is a really good album, despite its opening with what I consider to be one of the worst songs ever written, “Rudolph The Red-Nosed Reindeer.” For my analysis of that song, click here.

She follows “Rudolph” with “Santa Baby,” one of the holiday’s sexier songs. There is always a wink in the vocals when singing the line, “I’ve been an awful good girl.” As a side note, no matter how many times I sing this song, no one has slipped a sable coat under the tree for me. Of course, I don’t have a tree, but that is beside the point, isn’t it? Maybe this year… Anyway, Annie Marie Lewis delivers a playful, delicious rendition. “Come and trim my Christmas tree.”

The album’s title track, “A Rock ‘N’ Roll Christmas” (or, as it’s printed, “A Rock N’ Roll Christmas”), is an original tune written by Danny Harvey, though borrowing a bit from The Ramones’ “Rock ‘N’ Roll High School.” “It’s the night before Christmas, and all through the house/Everybody is rocking, even the mouse/The whiskey is flowing while the records play/We’re going to rock it ‘til the break of day.” Not a bad way to spend the holiday, eh? And this is certainly a great song to play at your Christmas party. Everyone can get into the action, no matter his or her normal demeanor: “The Grinch is boppin’ with Ebenezer Scrooge.” Then her version of “God Rest Ye Merry Gentlemen” really swings.

One Christmas song that is perfectly made for this album is “Santa Claus Is Back In Town,” written by Jerry Leiber and Mike Stoller, and originally done by Elvis Presley. I really dig Annie Marie Lewis’ vocal delivery, and I can’t help but love that piano. It’s followed by “Frosty The Snowman,” which is one of those holiday songs that I could do without. That being said, this is possibly the best version I’ve heard. It has a classic rock and roll feel, with a youthful innocence about it, and has a nice instrumental section. I also like what Annie Marie Lewis does with “Deck The Halls,” making it cooler than it’s probably ever been before. I like the sort of steady rhythm in the vocal line that works with the drums. It’s kind of simple, but effective.

“Hush Lil’ Baby (Merry Christmas)” is a tune attributed to Danny Harvey, but it’s really a combination of other songs. It has a Bo Diddley beat, and sounds quite a bit like The Strangeloves’ “I Want A Candy,” but with lines from “Hush, Little Baby,” the traditional lullaby. For “The First Noel,” Annie Marie Lewis offers a more traditional interpretation, not adding much rock and/or roll to it.

“Little Drummer Boy” has always been one of my favorites of the traditional Christmas tunes, even before Joan Jett released her version (though it was her rendition that cemented my love for the song). Annie Marie Lewis gives this one a fast and full drum beat, with a classic rock and roll guitar over it. This is one that will be perfect for your holiday party. She then ends the CD with “Merry Christmas Baby,” another of the holiday’s best tunes. She delivers a good rendition of this smooth and sexy rhythm and blues number. At one point the guitar does a little “Jingle Bells” tease. And I love that piano part in the second half of the song. Annie Marie Lewis whispers the last line of the song, and thus of the album, as if directly to each of us, “Merry Christmas, baby.” Oh yes!

CD Track List
A Rock ‘N’ Roll Christmas In The USA was released in December of 2014 on Rockabilly Records, a division of Cleopatra Records.
Posted by Michael Doherty at 5:38 PM