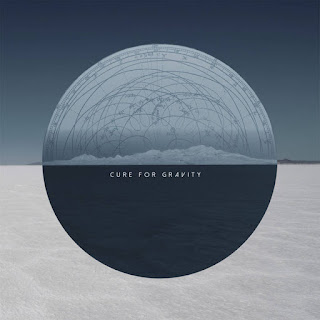 Cure For Gravity is a rock trio made up of Joe Markert on lead vocals, guitar and keyboard; Chris Gamper on drums and percussion; and Dave Walcott on lead guitar. The band is based in Oakland, and just released a new self-titled album, following the 2012 EP Fallen Stars. Joining them is Dan Feiszli on bass and Casey Cameron on keys. It’s an interesting CD, the tracks combining different musical influences, though largely in the pop realm, at times going in surprising directions and creating an unusual atmosphere.

The first track, for example, “Tonight,” begins as an eerie instrumental journey, with some electronic sounds, and it seems like we’re going to go off on one of those grandiose science fiction-like ventures that progressive rock bands often seem so fond of. You know, where humanity is divided into various sects and must get on a spaceship and find a new world because we’ve fucked this one up beyond repair. But then just when I’m about to lose interest, the song goes in a completely unexpected direction, taking on a sweet tone, as the vocals have a smooth quality for the first line, “Whatcha going to do tonight?” The vocals are delivered with power and emotion, and the song has a pretty pop vibe. And I’m surprised at how much I’m sucked into the world of the song. Louise Nalbandian joins the band on backing vocals.

“Tonight” leads straight into the following track, “Sunspots,” which has a darker rock feel at the start, but which also features a really good vocal performance by Joe Markert. He allows himself to explore his ranges, both vocally and emotionally, without ever getting too wild or self-indulgent, and I think that is a great part of the appeal of the music. This is a voice we want to have guide us through these songs, these realms. This one develops into a good jam. Ray Puzey joins the band on keyboard on this track.

Something about the electronic sounds at the beginning of “Just Like Candy” call to mind certain 1980s music. “Violence on the dance floor/She wants less, but he wants more.” This one too goes in a surprising direction toward the end, the drums leading to an energetic rock section. I also dig the rhythm of “Blackmetal.” These are all good songs, but “Push” is by far my favorite track. The first time I put this disc on, this is the song that made me decide to pay much closer attention the second time through. And actually I ended up listening to the disc again straight away, in large part because of this song. There is something beautiful and moving about this song, in both the vocals and the guitar. “I couldn’t push you/I couldn’t push you away.” Louise Nalbandian again joins the band on backing vocals. I’ve now listened to this song several times, and it is always effective. Toward the end, it kind of drifts off. The CD then concludes with “Killing For The Queen,” in some ways perhaps the most interesting track, beginning with a beat that actually reminds me just a bit of Phish’s “Bouncing Around The Room,” but then building from there into something that is more in line with the sound of Depeche Mode.

CD Track List
Cure For Gravity was released on October 14, 2016.
Posted by Michael Doherty at 9:38 PM