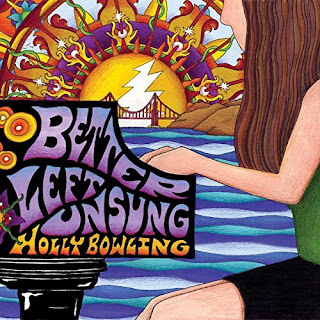 My favorite song is “Ripple” by the Grateful Dead. For the title of Holly Bowling’s new CD, Better Left Unsung, she chose a phrase from the lyrics of that song (from the lines, “The thoughts are broken/Perhaps they’re better left unsung”). And though she doesn’t cover “Ripple” here, it’s still a perfect title for an album of instrumental renditions of Grateful Dead songs. This is a two-disc album of solo piano versions of some the band’s best material. And if you think that because it’s a solo effort,  there will be no exploration, think again. Even in the first track, Holly Bowling finds some interesting places to go. And the second disc contains some fairly lengthy tracks, including a half-hour “Dark Star.” Better Left Unsung is Holly’s second release, following last year’s Distillation Of A Dream: The Music Of Phish Reimagined For Solo Piano, on which (as you might surmise) she covers material by Phish. Better Left Unsung contains more than two hours of music.

Holly Bowling kicks off this two-disc album with “Help On The Way” into “Slipknot!” The Dead often opened a set with these tunes, and so it feels a rather appropriate way to get things going. And as with the Dead, Holly Bowling uses the “Slipknot!” portion of the track to explore. And as the Dead did, Holly goes from “Slipknot!” directly to “Franklin’s Tower,” which is presented as a separate track.  This is a delicious (though fairly short) version. I especially like that delicate moment where Holly plays softly; I found myself drawn in, listening more intently.

“Cassidy” is one of my favorite Grateful Dead songs, and Holly’s rendition begins beautifully. She really focuses on the sweet and magical elements of the song, and the results are remarkable. This is one of my favorite tracks. It took me a moment to recognize “Bird Song,” but this is another tune with an inherent beauty, and Holly seems to know intuitively how to capitalize on that aspect of the material and bring it to the fore. This rendition is at times uplifting, though it does seem to end prematurely.

Who thought a version of “Wharf Rat” without Jerry Garcia’s vocals could be so moving? Of course, it’s impossible to listen to this rendition without hearing the lyrics in my head. “But I’ll get back on my feet someday.” Holly follows that with “Unbroken Chain,” a Grateful Dead song that isn’t often covered. In fact, the Dead themselves didn’t begin performing it in concert until what would turn out to be their final year. So it’s a treat to hear this really nice rendition. This song translates so well to this kind of treatment, and this is one of my favorite tracks. It’s absolutely wonderful.

After an interesting take on “Crazy Fingers,” Holly delivers a nice “Cryptical Envelopment,” which works really well on piano. “The Other One” isn’t quite as powerful on just piano as it is with the bass and drums (I always love Phil’s monster lick leading into this song), but it’s still cool. Holly then goes back into “Cryptical,” and I love how she chooses to end this track. She then concludes the first disc with a nice, sweet “Row Jimmy.”

The second disc, much like the Grateful Dead’s second set, contains longer tracks. It opens with “Terrapin Station (Suite),” a song that fans were always excited to hear the Dead do in concert. However, the Dead didn’t perform the complete song as presented on the 1977 record. They did the first couple of sections, going off into other tunes before “At A Siding.” On this CD, Holly does the entire song. She follows that with another personal favorite, “Eyes Of The World.” This was one I was always excited to see the band perform in concert (they played it at my very first show). The band did some pretty amazing versions of this song over the years, particularly in 1973 and 1974, when there was an extra section to the jam. Interestingly, Holly Bowling chooses a particular concert rendition of “Eyes Of The World” to translate to solo piano, that being the one from the show the Dead did at Freedom Hall on June 18, 1974. An excellent choice, as that is a very jazzy, groovy version. And yes, she does that extra bridge that I love. At that show in 1974, the Dead followed “Eyes Of The World” with “China Doll,” and here Holly does likewise, going straight into it, and delivering a gorgeous and moving rendition.

Holly then concludes this CD with that nice, long version of “Dark Star” that I mentioned earlier. It’s more than twenty-seven minutes long, and goes in plenty of interesting directions. This is one you want to listen to in the dark, with eyes closed, just letting the music take you where it will. It sounds like there is more than just piano here. This is a pretty amazing version of one of the Dead’s most beloved compositions.