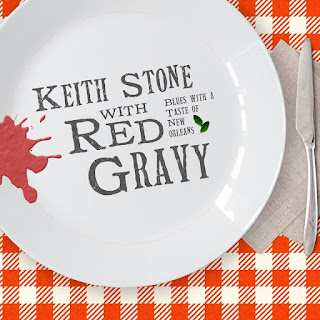 What is it about New Orleans that makes that city so bloody appealing to just about everyone? People I know who don’t travel at all talk about going to New Orleans. I haven’t been there in years, decades actually (geez, time is cruel), and yet I feel a connection to New Orleans perhaps as strong as if I’d spent my youth there. I think a big part of the draw is the music. The music seems to pulse through every aspect of the city, like the folks there are made of music as much as of skin and bone. And the rest of the country is able to pick up on that vibe. Maybe all we can get is a taste, but that taste is enough to keep us going, to keep us connected. And so an album titled Blues With A Taste Of New Orleans gets me excited and feels familiar even before I pop the disc in. Keith Stone With Red Gravy is made up of Keith Stone on guitar and vocals, Tom Worell on keys and backing vocals, Kennan Shaw on bass and backing vocals, and Eddie Christmas on drums. Their new album also features a couple of guest musicians on certain tracks. Blues With A Taste Of New Orleans contains all original material, written by the band.

The album opens with “Ain’t That The Blues,” which has kind of a standard blues rock sound. Brent Johnson joins the band on slide guitar for this track. “When you just can’t win or lose/Ain’t that the blues.” There is some good work on guitar, but this song is not nearly as interesting as what follows it. The next song, “Love Done Put Me Down,” is the track that really grabbed my attention the first time I listened to this album. It is funky blues with a great rhythm. Seriously, this track features some absolutely wonderful stuff on bass and drums. “Told me you loved me, but you told me a lie/Said you’d stay until the day I die.” It’s interesting that the woman is assuming he’ll die first. Don’t turn your back on this chick. This track also features some cool stuff on keys, particularly during that great jam section. This tune is a total delight.

Then “You Ain’t Got Nothing” has a more relaxed blues groove. “You ain’t got nothing/Nothing I want/You ain’t got nothing/Nothing I need/No, you ain’t got nothing/Nothing for me.” He then goes on to describe the woman as owning a lot, and casts some doubt on her method of obtaining her riches. I love the addition of sax on this track. That’s Jimmy Carpenter on saxophone, and he delivers a really nice lead part. This tune becomes a good blues jam, with more interesting work on guitar. Things never get too crazy here, but rather stay close to that groove. That’s followed by “Red Gravy,” a song about New Orleans, a song that feels and sounds like the dancing heart of the city. I love that groove, and I need to get back to that city at some point. This song, like a lot of New Orleans tunes, is about food. But these guys are also singing about themselves, aren’t they? After all, the song is titled “Red Gravy,” which almost gives them a spot on that list of bands that have songs sharing their names (along with groups like Bad Company, Black Sabbath, I See Hawks In L.A., and They Might Be Giants), except that the full name is Keith Stone With Red Gravy. “Way down in New Orleans/A city that loves to eat/We’ve got a special dish we make/With or without meat/Now you may call it sauce/But let me tell you something, baby/When you get down here, get the red gravy.” This song is a lot of fun, and that moment when Keith Stone laughs is perfect.

The band then turns romantic with a mellow, passionate, sweet, late-night number titled “Crazy In Love With You,” one of my personal favorites. This one features some nice work on keys and a heartfelt vocal performance. Plus, Jimmy Carpenter delivers a great saxophone part. This song makes me think of my beautiful girlfriend; I am crazy in love with her. “I want to find the words/To say what’s on my mind/But I can’t think straight/When I look in your eyes/Oh, I’m crazy, crazy in love with you.” The band gets back to a funky rhythm for “Time To Move On.” Yeah, the groove is king here, and will get you on your feet. “What worked don’t work no more/So it’s time for a change/If you keep doing things the same way/That’d be insane/And I got a feeling it’s time for me to move on.” Oh yes, we are all ready for a change! We are all ready to move on. This track also features Jimmy Carpenter on saxophone.

“Hard To Have The Blues” has a cool late-night vibe, with some delicious work on both keys and guitar right from the start. It then becomes a really good blues jam. “I did not know love could be this good/Please tell me that you feel it too/I cannot hide my love for you/’Cause you make it hard to have the blues.” The CD ends with another tune with a strong New Orleans vibe, “Something In The Water,” about New Orleans, its people and its music, and about the way that all works on us. “There must be something in the water/Giving music that beat/There must be something in the water/It’s got ‘em dancing in the street.” This one features more delicious stuff on keys, and there is a section in the middle with percussion and whistles, like a second line entered the studio, inviting us to join the party.

CD Track List
Blues With A Taste Of New Orleans is scheduled to be released on September 10, 2018.
Posted by Michael Doherty at 12:49 AM