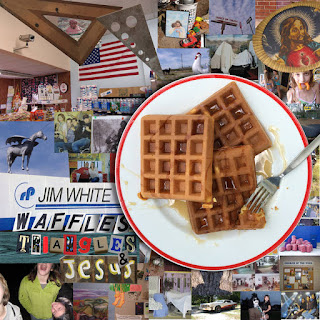 Waffles, Triangles & Jesus is – by my count – Jim White’s third album to have “Jesus” in the title (following The Mysterious Tale Of How I Shouted Wrong-Eyed Jesus and Jim White Presents Music From Searching For The Wrong-Eyed Jesus). What significance does that fact hold? I don’t know, maybe none; let’s not dwell on it. This is a seriously good album, containing all original material written by Jim White and Mike Pratt. Jim White also plays a good amount of the instruments, including guitar, banjo, slide guitar, flute, melodica, keyboard, piano and percussion. Yet there is room for several other players. The band Hog-Eyed Man backs Jim on most tracks, and a whole lot of guest musicians join him on various songs.

“Drift Away,” the album’s opening track, builds slowly, establishing an eerie, haunting vibe that gets its hooks into me. Sometimes Jim White’s vocal delivery is so intimate, as it is when he sings these lines: “Night is falling/And I would love to find that current which leads to the sea/I hear footsteps on the shoreline/I see you standing watching me/Drift away.” That long pause before “Drift away” is so potent, captivating. This song has a gloriously dark vibe, like bluegrass’ troubled cousin. It’s followed by “Long Long Day,” the sound at the beginning takes us to a different time. This one gets you in its grasp from the very beginning, and then takes you on an unusual and singular ride. It’s interesting where this song goes and how it gets there, and I love its use of backing vocals. Then after those first two strange tracks, “Playing Guitars” comes as a surprise with its more upbeat, somewhat traditional folk and country sound. This one has a playful sense, and some humorous lyrics. It’s a little silly, but completely wonderful. This song is about how everyone is a guitar player. Does it lament or celebrate that fact? Maybe both. He includes himself, obviously, among the multitudes of guitarists. Holly Golightly joins him on vocals on this track. Josh Klein then joins him on trumpet on “Silver Threads.” The lines from that song that always stand out for me are these: “Setting fires in the foothills of our minds/Seeking mysteries that lay somewhere behind/Hidden truths that only broken hearts can find.”

Things get strange again at the beginning of “Prisoner’s Dilemma,” and then suddenly it’s like we break through a dense jungle to come upon a clearing populated by magical jazz beings. But we are not out of the woods yet. This song goes in some interesting directions, and I like the percussion. There is an odd spoken word section, recalling an incident and the arrest. “That if I am a prisoner/Then that’s just what the good lord made me.” Jeff Crouch plays trumpet on this track. That’s followed by “Reason To Cry,” which becomes a sweet-sounding folk number, with violin. This track also features cello, an instrument I love. As always, I could do without the rain sound effect, but I still really like this song. “I found a young woman unknown to these parts/And from her lips came that terrible sound/In her wailing she heard not a word I said/When I asked her the cause of her pain/So after a while I just left her lying there/All alone in them woods in the rain/Figured she might just have a good reason to cry.”

“Here I Am” has a sweet, pleasant sound to make you feel good. “What can you say but hey hey hey, well, here I am?/Can’t lose your mind trying find your way to some promised land/Between what’s here right now and what might be there up then.” And I love that horn. “So I might as well just get used to me,” he repeats as the song comes to an end. Sounds about right. The album then concludes with “Sweet Bird Of Mystery,” which has the sound of a young child at the beginning and features gentle, pretty work on guitar, piano and strings. The vocals have a certain beauty, even as some of the lines have a bit of humor to them, like “By the time that you hear this, I’ll be wearing store-bought teeth.” This is a sweet and loving song. “I wish you good luck in the future/Sweet bird of mystery.”