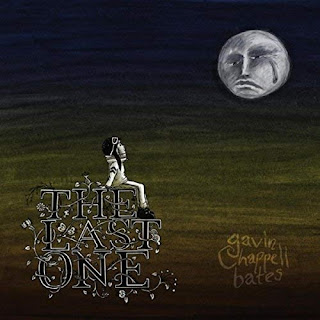 Gavin Chappell-Bates is a singer and songwriter based in England, working in the folk-rock and pop realms. I was turned onto his music a few years ago when he released the EP We Are The Ones. This year he released a full-length album titled The Last One, featuring all original music. On this album, in addition to writing the songs and providing the vocals, Gavin Chappell-Bates plays guitar, bass and percussion. Paul Richards is on drums, and there are a few guest musicians on various tracks. At times, this album is a lot of fun, while also touching on some serious subjects including the end of the world. So, yes, it is a perfect album for these strange times we find ourselves in, when things seem dire and ridiculous.

Gavin Chappell-Bates begins this one with “The Philosopher,” which has a bright folk-rock sound seemingly designed to lift our spirits. And check out these lyrics: “No past, no future, just the present tense/We could see everything/We could dream everything/We could be anything.”  I appreciate the positive spin this song has, particularly now. The world drags us down daily, but the music will counteract that. It ends with the repeated line, “We can be anything.” Okay! It’s followed by “Lovely Day,” and this one too immediately has a bright vibe. The “la la-la la la la” vocals, which are at the beginning, can never let us down, right? “It’s going to be a lovely day,” Gavin tells us in this song. Well, it certainly sounds like it. This song does exactly what it’s supposed to, and I find myself smiling and my optimism returning. “Whatever it will be, it will be okay.” I believe it.

“Young Lovers” begins with sound of a radio dial turning, searching for something, but finding mostly static. And then the song really begins. It’s like, not finding what he’s looking for, he just leaves the radio on static, and provides the song he needs himself. It’s a rock song about young lovers in Hollywood, and has something of late 1970s/early 1980s vibe. Then “Mother” has a gentle, nostalgic and loving sound. This pop song features Duncan Maletka on keys. That’s followed by one of my favorites, “Bad Faith/Good Faith,” a totally catchy rock tune that got me excited just the way music did when I was first buying albums in the early 1980s. Wonderful stuff! Neil Bruce plays lead guitar on this track. And check out these lines: “Morality bound by rule is no morality at all/This anguish we can’t escape, a burden, a heavy weight/This freedom is yours, it’s yours to embrace.”

There are more positive sounds in “Do What You Like,” and if you don’t pay attention to the lyrics, you might think it’s a cheerful tune. But I love the way the song addresses certain people, perhaps drawing them in with the cheerful sounds, then slapping them with some powerful lyrics. “Take what you want to/Take what you like/Scorch the planet/Leave it to die/You think it’s your own endless supply/So you take what you like.” This is another of my personal favorites. And it provides a warning: “We can’t just continue to grow/Until it all explodes/When nature tells us to go/We won’t do what we like.” That’s followed by the album’s title track, “The Last One,” a solid, unabashed rock tune about the end of the world, and it is seriously fun. Yes, this one will get you dancing into destruction. There certainly are moments these days when it feels like we are close to the end, particularly here in the U.S.  But this tune has a sense of humor about it, with lines about getting stoned after everyone’s dead and about thinking the apocalypse would be more fun. The lines about going to the mall remind me of Night Of The Comet more than Dawn Of The Dead. And the repetition of “Everyone’s gone” and “You’re the last one” are like twisted mantras. Tim Gifford plays bass on both “Do What You Like” and “The Last One.”

“The Sanctuary Of Stars” is also about the end of the world. Hey, it’s on the minds of a lot of us these days. This one has more of a folk sound, and even though it’s about the end, it looks to the future. “We float into space/The end of the human race/Now we’ve been released/There will be peace/No countries, no race/No divisions, no hate.” Yes, there certainly will be peace when humans are gone. The album then concludes with “This Is It,” a song written by Neil Bruce and Gavin Chappell-Bates. The guitar part at the beginning worried me because it sounds like “Sweet Child O’ Mine.” I know I’m in the minority here, but I detest Guns N’ Roses (and, people, it should be Guns ‘N’ Roses, not Guns N’ Roses, unless it’s supposed to mean “Guns No Roses”).  But this is a good song, particularly because of the lyrics. “Time, we all take too much time over nothing/Then it’s gone, it’s lost and we’re forgotten/We cling to a hope that things will get better/Dreams aren’t for today or tomorrow, they’re for never.” Life is short, and we all waste all too much of it. “This is it/This moment/This is your life.”