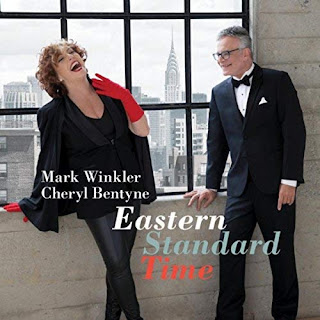 In 2013, they gave us West Coast Cool. Now jazz vocalists Mark Winkler and Cheryl Bentyne join forces again on Eastern Standard Time. However, it’s not like they haven’t worked together in the intervening five years. They performed two duets on Mark Winkler’s 2015 release, Jazz And Other Four Letter Words, and sang together on his 2017 release, The Company I Keep. These are two singers who work wonderfully together, and the resulting tracks on this new album are full of joy. Backing them on this release are Rich Eames on piano, Gabe Davis on bass, Dave Tull on drums, Grant Geissman on guitar, Bob Sheppard on saxophone, and Kevin Winard on percussion.

They start things with “Devil May Care,” and right away, the bright energy of these two vocalists takes hold and pushes aside the dark clouds that hang above our heads in this country these days. “No cares or woes/Whatever comes later goes.” Then approximately two minutes in, the tune shifts for a delightful lead section on piano, followed by a lead on saxophone. “Devil May Care” was written by Bob Dorough and Terrell P. Kirk, Jr., and originally recorded by Bob Dorough. This album is dedicated to Bob Dorough, who died a few months ago. That’s followed by “Rhode Island Is Famous For You,” a goofy, likeable tune written by Howard Dietz and Arthur Schwartz. Mark sings lead on this one, and he totally commits to it, even with the silly wordplay like “Tentessee” and “Wyomink.” This track features more nice work on piano.

They then deliver an original composition by Mark Winkler and Larry Steelman, “Like Jazz,” a song that Winkler originally included on his 2000 release, Easy The Hard Way. Ah yes, a song that reminds us all of how cool even the idea of jazz is. And this new rendition is wonderful. I love Cheryl’s playful way of delivering the line about “wicked ways,” and I dig that bass. Plus, there is a cool lead on saxophone. This tune makes us all want to “live like jazz.” Think of that world for a moment. Oh man, there’d be a lot of dancing, a lot of sex, a lot of drinking, a lot of city lights, a lot of spontaneity. Cheryl then sings lead on “The Gentleman Is A Dope,” delivering an excellent vocal performance. This track features more cool work on bass, as well as some good stuff on drums.

“I Could Get Used To This (Bumpin’)” is a song that was originally a Wes Montgomery instrumental titled “Bumpin’” to which Mark Winkler added his own lyrics. “I could get used to this/Not being alone/Turning this house I have into a home.” Oh yes, I could get used to that too (well, if I had a house). There is a cool instrumental section, featuring some wonderful work on guitar. That’s followed by a good rendition of “The Best Is Yet To Come,” that begins with snapping and Cheryl’s vocals. Yes, sometimes I believe that the best is yet to come. We have to keep a bit of optimism, right? Then Pat Kelley plays guitar on “Spring Can Really Hang You Up The Most,” which Cheryl sings, giving another remarkable performance.

“Walk On The Wild Side” opens with a bright burst, before the bass takes its due prominence. This is an interesting version of the famous Lou Reed tune. It’s a lively, kind of cool version with a bit of swing, a bit of swagger, and a bit of jazzy chaos. Although it’s lame that they don’t sing the “Even when she was giving head” line; instead, Cheryl sings “Even when she was, you know.” They also drop the “colored girls” line. Still, I really like what they give us here, and they do include the “doo doo doo doo” part, delivering it in an unusual manner. Plus, there is some great stuff on horn. There is also a brief spoken word section toward the end, in which they mention Lou Reed and William S. Burroughs. “Things Are Swingin’” is a lot of fun. Mark Winkler and Cheryl Bentyne deliver a lively, bright rendition of the Peggy Lee song. “Things are swinging,” indeed! The disc then concludes with a medley of “The Ballad Of The Sad Young Men” and “The Lies Of Handsome Men,” featuring Stephanie Fife on cello. The lines “All the news is bad again/Kiss your dreams goodbye” seem particularly pertinent these days, eh?

CD Track List
Eastern Standard Time was released on CD on August 13, 2018 on Café Pacific Records.
Posted by Michael Doherty at 1:10 AM