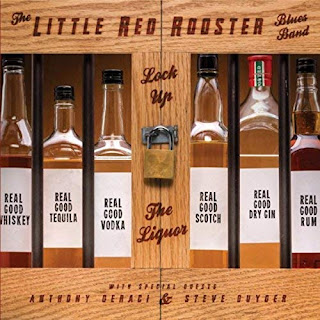 The Little Red Rooster Blues Band, based in Doylestown, Pennsylvania (just a bit north of Philadelphia), has been playing for thirty years. That’s a hell of a long time for any band, but it certainly doesn’t sound like these guys will be stopping any time soon. The band’s new album, Lock Up The Liquor, is vibrant and fun, with a lot of impressive playing. It features all original material, but with some classic vibes and sounds. The band is made up of Kevin McCann on vocals and guitar, Dave Holtzman on harmonica and vocals, Jeff Michael on bass, and Bob Holden on drums. Anthony Geraci joins them on piano for approximately half the tracks, and Steve Guyger joins them on harmonica and vocals for one tune.

The classic sounds are present right from the start, as the album kicks off with a cool instrumental track titled “Pitchin’ Woo.” The band is clearly having a good time, and you will too as you listen and let the music take over. It’s got a great groove, and Anthony Geraci’s work on piano is wonderful. There is a drum fill toward the end that I just love. All in all, it’s a perfect start to the album. It’s followed by “Drinkin’ Wine On My Dime,” a fun blues tune about how dating can be expensive, and how sometimes you just have to put a stop to it. “Cabernet, chardonnay, port, and merlot/Put a big dent in my cash flow/I ain’t financin’ this romancin’ no more.” I also really like this line: “To take you on a date I need to take out a loan.” There is a lot of great stuff on harmonica here, and the song becomes a good little jam, with some delightful work on keys. (Yeah, Anthony Geraci is on this track too.)

In “Rather Be Lonesome,” they sing “Well, I’d rather be lonesome than to stay with you.” Ah, we’ve all felt that at one time or another. I bet that prostitute Melania feels it right now.  This song features a steady, light and totally enjoyable rhythm. The driving force, however, is the harmonica. That is also the case with the following track, “Cotton Mouth,” an instrumental tune dedicated to James Cotton, a tremendously talented harmonica player who died last year. This is one of my favorite tracks. It’s a whole lot of fun, along the lines of J. Geils Band’s “Whammer Jammer.” James Cotton certainly had an influence on that band, and he and J. Geils did play together. James Cotton also sat in with the Grateful Dead. Anyway, I absolutely love this track. In addition to some phenomenal work on harmonica, it features some excellent stuff on guitar. Then “Ready For Goodbye” is a slower number, with a really nice vocal performance. Man, I love these classic sounds. And during the instrumental section, I dig the interaction between guitar and harmonica. Anthony Geraci adds more great work on piano.

“Thrift Shop Rubbers” is a goofy, lively and totally delightful tune in which we learn that “Secondhand protection ain’t no protection at all.” Sure, it’s absurd, but it’s funny. It’s interesting (and surprising) that a little after he sings “Not even my size,” he goes in the direction of the rubbers being too big rather than too small. There is some completely delicious work on guitar, and I love the backing vocals singing the title line. But then it turns out the song is about galoshes. Sure it is! That’s followed by another of my favorites, “Nothin’ Left Between Us.” Harmonica starts this one, and harmonica is at its heart, with some fantastic work on keys supporting it. “There’s nothing left between us, and I don’t even want to try/If I told you I still love you, I’d be telling you a lie.” Oh, that harmonica sounds so wistful, so wounded, so wonderful. The guitar likewise is so expressive. This tune just gets better and better. Do yourselves a favor and check out this track.

I always enjoy that Bo Diddley beat, which this band uses in “Trouble In The Jungle,” a tune that also features a cool lead on bass toward the end. That’s followed by yet another of the disc’s highlights, “Six Strong Men.” It has something of a New Orleans flavor, particularly in that it’s a fun tune about one’s own death. “When my time is up, I can no longer stay/I need six strong men to carry me away.” Death is a fearsome topic, and songs like this help take the edge off. You know? They help relieve us of some of the fright. And, yes, this is another of the tracks on which Anthony Geraci plays. Then Steve Guyger joins the band on harmonica and vocals for “4 O’ Clock In The Morning.” That is a magical time for music; it seems a lot of songs take place at that time, including “Famous Blue Raincoat” and my favorite Josh Lederman Y Los Diablos song. “Such a lonesome, lonesome time” is the way it is described in this Little Red Rooster Blues Band song.

“Can’t Believe She’s Mine” is a fun number about the luck some of us have with regards to women. I myself am completely bewildered to have ended up with such an extraordinary woman. “She’s so fine/I can’t believe she’s mine/When she tells me she loves me, she makes me feel all right.” Oh yes! The CD then ends with the title track, a lively tune to get you on your feet. “Your eyes were blurry and your speech was slurry/Sure hit the liquor cabinet in a hurry.”