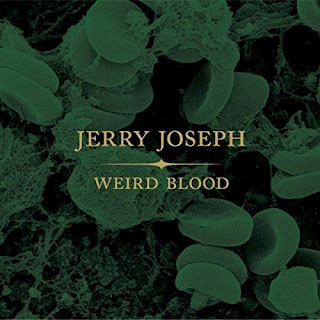 Jerry Joseph is a singer and songwriter working mainly in the rock genre, performing and recording with his band The Jackmormons, which these days includes Steven James Wright on bass and Steve Drizos on drums. Earlier this year, he put out Full Metal Burqa as part of the limited edition Record Store Day releases. And late last year he released Weird Blood, an album I’ve been listening to a lot lately. One thing I love about this album – and about all of Jerry Joseph’s music that I’ve heard – is that the lyrics are so good. These songs include lines like “And we toast old friends/But it’s time we put ‘em to bed” and “Put a flame to the page/Recanting the blood in our bones.” Actually, those lines are just from the first song. But they give you an idea of how good the album is.

Weird Blood opens with “Sweet Baba Jay,” a song which has a bit of an Elvis Costello sound. It’s rock, with something of a punk attitude, which I love. This is a strong track, an excellent start to the album. “Well, we come to you now on our knees/We smell of defeat/If your right hand is glory/We beg you/Save us a seat.” That’s followed by “Peace In Our Day,” which comes in with a thumping, driving rhythm, but ultimately has an uplifting, positive vibe about it. Its first line is “Can I get an amen?” and it ends with that same line delivered a cappella. “Can I get an amen?” Oh yes! Jeff Crosby, Michael Lewis and Joe Kempler provide backing vocals on this track, giving it a bit of a gospel-rock vibe. Jeff Crosby is also on electric guitar, while Mookie Siegel is on organ.

From the beginning of “The Eyes,” it sounds like something John Mellencamp might do, with that guitar part and that drumbeat, and of course the vocals. I like this track a whole lot. Check out these lines: “Howl in the heat, bathe in the rain/Look in the fire, it calls you by name.” Then the repeated promise “I will never let you down, baby” is followed by some nice work on electric guitar, and this track also features some great stuff on keys. This song has the energy of an early Rolling Stones song. It’s followed by “Think On These Things,” a mellower tune with a good deal of soul, and nice gospel-like backing vocals by Kelly Hogan, Casey McDonough and Scott Ligon. “This is the morning of your better days/And the promise they bring/Come, let us think on these things.” “Wild Wild West” has something of a sweeter vibe, but still with an edge. “Folks ‘round here think she’s lazy/But they’ve yet to see her dance.” Little Sue Weaver joins Jerry Joseph on backing vocals on this one. That’s followed by “3-7-77,” a song that when I first glanced at the title I thought might be about my fifth birthday. But, no, the title refers to the Montana Vigilantes, though the exact meaning of the numbers is something of a mystery. Some believe they represent the dimensions of a grave – three feet by seven feet by seventy-seven inches. In this song, Jerry Joseph sings, “We’re leaving nothing here but graves,” so perhaps he subscribes to that theory. The song has an angry, desperate tone, fitting for its subject.

One of my absolute favorite tracks on this album is “Late Heavy Bombardment,” which has a quiet folk sound and some excellent, poignant lyrics. “Hold on to each other and rise up out of the dust/There isn’t a fire as hot as the love between us.” This song gets to me every time. “When the fire rains down, your eyes are what I need to see/When I see that you love me I know in the end, that there’s peace/Don’t look away from me.”  That’s followed by “Weird Blood,” the disc’s title track, which comes on strong, like it means business. It maintains an intense vibe throughout, with lines like “Our blood will seep right through the page/It was in our scripture to read/Coyote chews right through his leg/Let it bleed.” I love Steven James Wright’s work on bass. The album then concludes with “Buddha Jim.” The lines that always stand out for me are these: “To be untethered and free/Another stone among the lunar debris.”