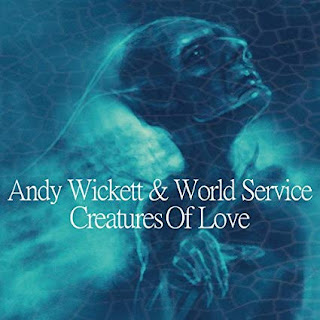 Sometimes I just want to hear some really good pop music. Creatures Of Love, the recent release from Andy Wickett & World Service, certainly fills that need. All songs are originals, written or co-written by Andy Wickett. If his name sounds familiar but you can’t quite place it, before Simon Le Bon took over, Andy Wickett was the lead singer of Duran Duran. You can hear him on Girls On Film 1979 Demo, released last year. So there’s that. On this album, he plays guitar, keyboards and harmonica, as well as providing the lead vocals. Joining him are Barry Lim on guitar and keys, Peter Churchill on bass and backing vocals, Antony Cook on drums, Glyn Phillips on percussion, Hannah Lawson on violin, Ash Sheehan on horns, and Julianne Bastock on backing vocals. Will French and Paul Foad provide some additional guitar work.

The album opens with “Border Song,” a positive-sounding and uplifting pop gem, with some delightful surprises. “We’re on the south side of the border/I never thought we’d get this far/We came across the desert in a tiny car/We never knew what we would find/That’s why my heart is blind.” This is a song I enjoy more each time I listen to this album. That’s followed by “Make It,” which starts with a folk sound, Andy Wickett’s vocals accompanied by acoustic guitar. “I bet I can make it through the night/Boy, it gets so lonely/Oh, I’d love for you to hold me tight/If I can make it through this life.” Then when it kicks in, there is something so delicious and catchy about this song, in part because it is has a playful quality. It’s that adorable bass line that comes in like halfway through the song. And those backing vocals along with Andy’s main vocal line make me so bloody happy. “Don’t look so forsaken/Maybe you’re mistaken/Things will be all right/If you just be patient/Love will be awakened.” This song has a surprising ending, a strange, somewhat calming electronic sound. This is one of my favorite tracks.

There is something pretty about “Kingdom,” its sound, while reminding me a bit of Peter Gabriel. I really like Andy Wickett’s vocal approach, and those backing vocals are wonderful. This one was written by Andy Wickett and Antony Cook. “Evidently” is a totally enjoyable, bright pop song, with a good rhythm, another of the disc’s highlights. “I’ll tell you, boy, you’ve got to try/Don’t tell yourself you’re finished, finished, finished/Because now is not the time to die.” This is a track that never fails to raise my spirits. “Children Of The Night” is yet another highlight, a glorious pop song with a great energy. “The way they do things on TV/That’s the way I’d like to be/They say the dream can be so real/But that’s the way I’d like to feel.” That’s followed by the album’s title track, “Creatures Of Love,” which was written by Andy Wickett and Antony Cook. This one is an unusual song, one that keeps me intrigued as it takes us through an interesting and varied pop landscape. And with the backing vocalists singing the title line, I am reminded of the Talking Heads song of the same name, but only in that moment. This song is one to pay attention to, and features a really good vocal performance. “Are you frightened of my love/Are you scared to share your heart/Neither of us makes a move.”

The album concludes with another delightful pop song, “Take Me To The City,” also written by Andy Wickett and Antony Cook. With its catchy bass line and groovy beat and fun flavor, this song makes me happy. This is pop at its best, at its most effective. It does everything I want a pop song to do, everything I need it to do. “You’re such a pretty girl/Wondrous and crazy/I want to take you out to the city tonight/And treat you right.”

CD Track List
Creatures Of Love was released on March 9, 2018.
Posted by Michael Doherty at 3:21 PM