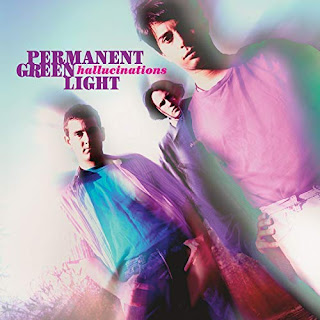 Permanent Green Light came about after The Three O’Clock ended in the late 1980s, with that band’s singer and bass player Michael Quercio joining up with guitarist Matt Devine and drummer Chris Bruckner to create some delightful psychedelic power pop. The trio released one album, some singles, and an EP before disbanding in the mid-1990s. It was all over so quickly that a lot of us didn’t get a chance then to enjoy the band. But now, thanks to a new compilation titled Hallucinations, we are getting that opportunity. This compilation features music from Against Nature, as well as the singles and EP, and also includes some previously unreleased tracks. This compilation also contains fairly extensive liner notes, with interviews with all three band members and other musicians.

The disc opens with “(You & I Are The) Sunshine,” a song from Against Nature that was also released as a single. This song is fun pop, the perfect song for summer, or any time in the year that you want to feel like it is summer. There is of course a bit of psychedelic sound to the music, and there is a bit of a punk vibe to the vocals at times. The vocals have that youthful, innocent, joyful vibe, and the first line is “You and I have no worries.” Ah, how I miss that sense. But this song makes it all feel possible again. This compilation also includes the 4-track demo version of this song, which is one of the previously unreleased tracks. The sound is a little rougher, of course, with the cymbals seeming to bleed into the other sounds, but it’s a cool version. It fades out, and there is just a bit of banter at the end.

“We Could Just Die” is a faster-paced pop rock tune with some cool work on guitar and a bit of punk to its style. This song was the lead track from the band’s self-titled EP, and it’s a seriously good song. It was also released as a single. That’s followed by “The Goddess Bunny,” an odd song, the verses having a more serious, sad tone, and delivered at a much slower pace than the chorus. The chorus is rather playful. “Having my way with the Goddess Bunny/Twisted limbs, but that’s not funny/Especially to Bunny.” The song is about a real person, a drag queen who is disabled due to polio and who goes by the name Goddess Bunny.

“The Truth This Time” was originally released as the flip side to “We Could Just Die,” and has a great rock sound. What stands out for me is its main line, “But I don’t believe the truth this time.” That line perhaps has more significance in these dark days when the bastard pretending to be president doesn’t believe in or speak the truth, when that creepy gargoyle Rudy Giuliani actually says “Truth isn’t truth.” Then the following song, “Street Love,” has the line “If I tell the truth, it’s because I couldn’t lie.” “Street Love” was originally included on Against Nature. The demo of “Street Love” is also included, a track which was previously unreleased. Another of the disc’s previously unreleased tracks is a 4-track demo of “Lovely To Love Me.” It’s an interesting song, because it has a really sweet vibe, yet also is kind of a thumping good rock tune.

My favorite track on this compilation is “Portmanteau.” This one has a very different sound from the start, with some excellent work on guitar. Then it kicks in, sounding more like a solid rock song, yet has plenty of surprises, both in the lyrics and the music. Plus, it has the most compelling vocal performance of the disc. “Old age and syphilis will chase you down/Go where you want to go.” This is a fantastic song from beginning to end. That’s followed by “Marianne Gave Up Her Hand,” another interesting and unusual track, though with a very different vibe. This one has a mellower feel, and features some really good lyrics, such as these lines: “I know the band’s made out of gold/The weight on her finger will show after time” and “He gave her his heart, she gave him her best.” The album concludes with an odd little track titled “From A Current Issue Of Sassy Magazine,” another of the disc’s previously unreleased tracks. In high school, a girl I didn’t really know (I went to a rather large high school) came up to me, saying she wanted to nominate me for Sassiest Boy of the Year, or some such thing. I had no idea what she was talking about, and she explained that there was a new magazine titled Sassy and they were looking for the sassiest boy in America, and she thought that I was a good choice. I thought she was joking. She wasn’t. It was the first and last time I heard about this magazine (until now), and – I think – the first and last time I heard from that girl. Anyway, this track is a phone message asking the caller to press a four-digit access code from an issue of the magazine in order to hear music from Permanent Green Light’s LP.