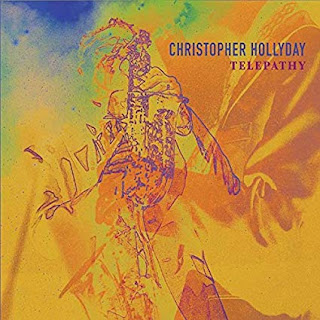 Saxophonist Christopher Hollyday got an early start on his jazz recording career, beginning while still in his teens. He released several albums as band leader, and then after 1992’s And I’ll Sing Once More, stopped. He moved from Massachusetts to California and began teaching. Well, he is now back, with his first album as band leader in twenty-six years, and it is a gem. Titled Telepathy, this album finds him delivering his own interpretations of some well-known jazz numbers, including music by Bud Powell and Charlie Parker. Joining him on this release are Gilbert Castellanos on trumpet, Joshua White on piano, Rob Thorsen on bass, and Tyler Kreutel on drums.

Christopher Hollyday opens the album with Freddie Hubbard’s “One Of Another Kind” (for some reason listed as “One Of A Another Kind” on the CD case). It begins with that brief mellow, moody section, but once this tune kicks in, it becomes an incredible whirlwind of jazz bliss, moving at a great pace and featuring some absolutely fantastic and exciting work by Hollyday on saxophone, and then by Gilbert Castellanos on trumpet. The whole thing is kept in motion by Tyler Kreutel on drums and Rob Thorsen on bass. Then the lead by Joshua White on piano flies along beautifully. There is a tremendous amount of joy on this track. It’s followed by Bud Powell’s “Hallucinations.” This one has something of a playful, cheerful vibe, as did Powell’s original version. This is a track that makes me smile each time I listen to it, and it just builds and explodes in wonderful ways. In one section of the track toward the end, both the trumpet and sax deliver great stuff, with drummer Tyler Kreutel filling those moments in between, entering into a delightful conversation with the horns. There is also something playful about the approach to Matt Dennis’ “Everything Happens To Me” (here titled “Everything Happens”), this version much livelier than most.

Christopher Hollyday then mellows things out a bit with a sweet rendition of Vernon Duke’s “Autumn In New York,” his saxophone sounding soulful and full of life. This track also features nice work from Joshua White on piano and Rob Thorsen on bass. I love that lead on bass.  Hollyday brings a fresh, warm energy to “I’ve Got The World On A String,” written by Harold Arlen (the lyrics by Ted Koehler obviously don’t come into play in this version). This track will certainly brighten your day. The disc then concludes with Charlie Parker’s “Segment.” This is an exciting track, coming at you with an intense, bright energy from the start. It then opens up into a splendid multi-limbed dance. The pace is fast, the musicians packing a whole lot of fantastic playing into a five-minute track. A seriously fun way to wrap up the album.

CD Track List
Telepathy was released on November 2, 2018. I assume we won’t have to wait another twenty-six years for his next album.
Posted by Michael Doherty at 1:24 PM