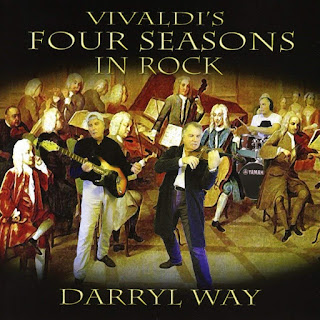 There have been several excellent rock interpretations of famous classical pieces, from Electric Light Orchestra’s version of “In The Hall Of The Mountain King” to Walter Murphy’s “A Fifth Of Beethoven,” from Jethro Tull’s rendition of Bach’s “Bouree” to Phish’s take on “Also Sprach Zarathustra,” from Emerson, Lake & Palmer’s version of “Fanfare For The Common Man” to, well, several other tracks by Emerson, Lake & Palmer. Back in 1970, Curved Air included a track titled “Vivaldi” on the Airconditioning album. It was written by founding member and violinist Darryl Way. Now Darryl Way has released an album of Antonio Vivaldi’s most famous work, Vivaldi’s Four Seasons In Rock. As you might guess from the title, this album includes “The Four Seasons”: “Concerto No. 1 in E major, Op. 8, RV 269, ‘Spring’ (La primavera),” “Concerto No. 2 in G minor, Op. 8, RV 315, ‘Summer’ (L’estate),” “Concerto No. 3 in F major, Op. 8, RV 293, ‘Autumn’ (L’autunno)” and “Concerto No. 4 in F minor, Op. 8, RV 297, ‘Winter’ (L’inverno).” Darryl Way doesn’t really change the music; that is to say, for the most part he doesn’t change the notes, just the way the notes are approached. Also, these pieces are still played on violin rather than, say, electric guitar, so fans of Vivaldi’s work should certainly appreciate this release. And the music, for those who are somehow unfamiliar with it, is extraordinary.

There are three tracks for each of the seasons, beginning with spring. “Allegro (in E Major)” sounds mostly as you know it, but with a pop beat through parts of it. It’s certainly not hard rock or anything. Rather, it is uplifting and pretty, a wonderful take on this famous and gorgeous piece of music. Then “Largo e pianissimo sempre” has more of an electronic feel, but retains the piece’s beauty and emotional weight. It is clear that this music resonates strongly with Darryl Way. “Allegro pastorale” has a bright sound right from the start. There are some minor fluctuations in volume that do not feel natural, but rather like a glitch, but these do not detract much from the enjoyment of this music.

“Allegro non molto (in G minor),” the first section of “Concert No. 2 in G minor,” is truly pretty and moving. It then suddenly takes a turn, becoming exciting and fun. Yet this version allows for those pauses, those quieter moments, before exploding again in sound. Sounds like an intense summer, full of wild emotion and even danger. Then in “Adagio e piano – presto e forte,” the beat feels more pronounced, under the sad sound of the strings, and the contrast in those two sounds is intriguing. “Presto (in G minor)” comes on strong, with a progressive rock feel, the violin fiery and serious.

“Allegro non molto (in F major)” has such a cheerful vibe, feeling to me like some glorious regal celebration where all people of the realm are invited, regardless of class. This is a piece of joy, of dance, of love, of light. It moves through some changes toward the end, including a brief somber section. Then “Adagio molto (in D Minor) has an electronic feel from the start, more so than the others, though the strings rise above that landscape somewhat. There is something sad about the sound, at least to my ears, just a touch of melancholy. Then “Allegro (in F major)” has a brighter feel from the start, though still some of that electronic feel. There is something of a dance about this track too, but with a slightly more serious air. It’s like the need to celebrate is felt by the people more intently, more urgently.

“Allegro non molto (in F minor)” has an intensity from the moment in begins, more prominent than in other versions I’ve heard. It feels like someone’s life is at stake. Yet there is also some beautiful work on violin. Then “Largo” has a mellower, gentler vibe, and is quite pretty. “Allegro (in F minor)” feels like it delivers some kind of warning as it begins. Things have become more serious again. But then it’s like we’re able to turn that to something delightful. This track has an exciting ending.

CD Track List
Vivaldi’s Four Seasons In Rock was released on May 4, 2018 on Right Honourable Records.
Posted by Michael Doherty at 2:02 PM