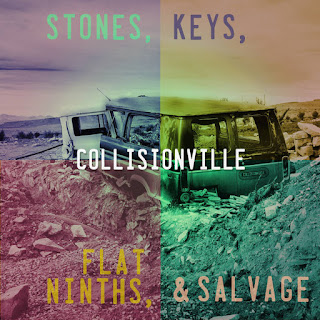 Collisionville is a band that combines a great country rock sound with punk elements and attitudes, and writes some pretty damn good lyrics. They are based in Oakland, and have experienced a few changes in the lineup over the years. The band is currently made up of Stephen Pride, Conor Thompson and Cory Snavely. Their new release is an excellent double album titled Stones, Keys, Flat Ninths & Salvage, and it is available on vinyl. I know I’ve mentioned this before, but I am ecstatic that vinyl has made a comeback. It just feels right that music like this release from Collisionville is on vinyl. Plus, it being a double album provides the opportunity for a cool layout (see photo at the end of this review). Stones, Keys, Flat Ninths & Salvage features mostly original material, and includes some guest musicians on certain tracks.

The double album kicks off with “Walkin’ Without The Lord,” which begins with a humorous bit of salesmanship, the words of a huckster of the tenth degree: “Along the banks of a trickling creek wearing the finest boots that you can afford/The way is rocky, but you’ll have no help when you’re walkin’ without the lord.” The song then kicks in with a glorious force to become some great shit-kicking country rock, with the emphasis on rock, featuring some excellent stuff on guitar, and all with a punk attitude. This is just fucking awesome. It’s followed by “Paint By The Numbers,” which is a total delight from the moment it starts, with Stephen Pride playing banjo as well as guitar. It has sort of an old-time sound, but with lyrics you won’t find on any records from a previous age: “I’m a sexy motherfucker but I can’t stay on the mattress.” I love the part with the backing vocals echoing certain words, single syllables, creating a cool vocal rhythm, but really it’s that banjo that makes this track so wonderful. This is one of my favorites. Then “Las Vegas, New Mexico” is more of a rock song with a straight-ahead sound. What stands out for me about this track is some of the vocal work, specifically when Stephen raises his voice. Those moments really grab me. Plus I dig the bass. And no, I had no idea there was a Las Vegas in New Mexico. The album side wraps up with “Somebody’s Free,” which also has a good rock sound, like that supplied by your favorite bar band. And it has a fun beat.

The second side opens with “Signifiers,” a slightly slower number whose interesting use of references to the Rolling Stones at the beginning pulled me in: “Learn well the lessons of the Rolling Stones/Not just Bill Wyman, but also Brian Jones.” This track has some seriously excellent lyrics, such as these lines: “I have a wish inside my darkest heart/To speak it would release it and break the lights apart” and “I'll drive until I'm lost in some horseshit gravel town/Everyone who's expecting me, I'm gonna let you down.” There is a lot going on in this song. Then in “Forgotten Time Zone Blues,” they mention a band called the Strolling Bones in the lines “I found something strange at Jerry's Record Exchange/Between the Righteous Brothers and the Strolling Bones.” The Strolling Bones are a Rolling Stones cover band, and that reference makes me think perhaps this is the side that should have been titled “Stones.” And the line “It’s all been a terrible mistake” seems to describe perfectly the 2016 presidential election and its ongoing fallout.

We then get back to that delicious old-time vibe with Charlie Patton’s “Shake It And Break It,” one of only two covers on this release. This rendition is a whole lot of fun. I love the banjo. Then the addition of trumpet partway through takes the tune to an even more delightful place. That is Indofunk Satish on trumpet. Matt Campana plays guitar on this track. “Your Sister’s Man” has a heavier rock sound at the start, with something of a darker vibe. There is both anger and bravado in the vocal delivery at times. And I dig Stephen’s work on harmonica at the end. He plays harmonica on “Nuclear Fountain Pen” too. This song also has one of the most interesting and powerful vocal performances of the album. Check out these lines: “There's a conspiracy it seems/To set a bomb off in your dreams/And send you home/To nurse your broken bones.” I love this song’s punk vibe, particularly the bass line. This is a seriously cool song, another of my favorites. “And this has all happened before/But something feels different about this war/Like there's no way back/As though the heavens have cracked.”

The next side opens with “I’m The Only One,” a slightly twisted and totally wonderful song, like from a haunted country singer from a distant land. Check out these lyrics: “The tank's all empty but I can't sit still/Give me treatment, give me matches and a sleeping pill/Is there anybody else who wants to crawl inside a gun?/I'm the only one.”  Seriously, these guys write some fantastic songs. Plus, this tune features pedal steel.  That’s followed by “Tearjerker,” which has more nice work on banjo. Not only that, but Stephen also plays fiddle on this track. “Goddamn it all, I just don’t care/You can take me like I am, or drop me off at a station somewhere.” You might find yourself singing those lines, or maybe shouting them. This tune has an unusual country sound which I love. Matt Campana is on guitar and backing vocals. Then “Turpentine” bursts in, grabs you and tosses you around the room. This one has more than a dash of punk, in the vocal delivery and in that great drum beat. “It's time to get down/It's time to get out/Raise your voice/If you don't know what you're talking about/A voodoo potion/What the country needs.” This track features the unusual, interesting addition of theremin (that’s Shifra Pride Raffel on theremin). Yeah, things get a little crazy near the end. Then things calm down for a sweet-sounding country tune, “When It Comes,” featuring nice work on pedal steel. How many different instruments does this guy play? “Take this promise from me/With a gentle grip between your fingers and your thumbs/I'll keep loving you beyond the heavens/When it comes.” Shifra Pride Raffel and Willa Mamet join the band on vocals on this track.

The final side of this double album opens with “Progressive Anthem For Kid Rock To Sing.” I wasn’t quite sure what to expect from this one. For supporting Donald Trump, Kid Rock can lick my toilet clean, and seeing his name sets me on edge. But the title is also a nod to The Minutemen’s “Political Song For Michael Jackson To Sing” (from Double Nickels On The Dime, which is also a double album), so I figured the tune would lean toward punk, which it does. This track comes on strong, the lyrics delivered with some anger, the first line being “Wake up, assholes.” The band then switches gears with “It’s Nice To Be Needed (But Not Needed Too Much),” a slower country number, a waltz, with Josh Wirtschafter joining them on fiddle. This song has probably my favorite title from this double album, although “Nuclear Fountain Pen” is also pretty awesome. Stephen adds some nice pedal steel. That’s followed by “I Gotta Laugh While I’m Cryin’ (To Keep From Just Cryin’),” a good solid rock tune. The line I love from this one is “I have no regrets that I know of yet.” We then get the double album’s other cover song, Robert Johnson’s “They’re Red Hot,” and it is another delight, with Stephen once again on banjo. This track also has Matt Campana on ukulele. It’s a fun track, and I dig the bass line. The double album then comes to a close with “We’re Called Collisionville,” a song whose title almost gets them a spot in that list of bands who have a song sharing their name. This one has a great opening line: “There’s been a lot of wrecks in my life.” They follow that with a line that made me laugh out loud “Don’t take it from me, just ask my wife.” It’s a playful look at not only the band’s name, but its history, making mention of the changes in the band’s lineup. 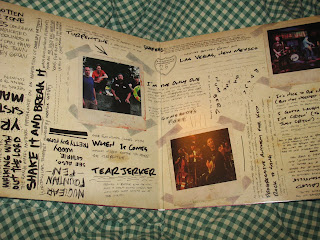 Posted by Michael Doherty at 10:30 PM