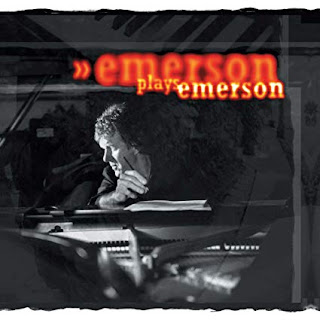 Keith Emerson was one of the many talented musicians we lost in that most foul of years, 2016. In the year following his death, Emerson Plays Emerson, which had been out of print, was re-released. This album features instrumental tracks, many of them solo piano pieces. You certainly do not need to be a fan of Emerson, Lake & Palmer to appreciate this album. The music here has its own appeal, mixing classical, jazz and rock influences. This album, which features mostly original material but also some covers, is for anyone who appreciates good piano music, music that is both powerful and timeless, and a lot of fun. The CD’s liner notes are in three languages (English, German and Italian).

The album opens with “Vagrant,” a beautiful piano piece that is moving, thoughtful, and at times comforting. It has a warm quality that I love. That’s followed by “Creole Dance,” one of the album’s covers. It was composed by Alberto Ginastera. It comes on strong, rushing in, shaking us by the neck, an exciting piece that takes some interesting turns. This track really demonstrates Keith Emerson’s talent. This guy could play. Then “Solitudinous” is a gentler piece, beautiful and sad, with a nostalgic quality, like it is looking back at a time that perhaps contained its own set of troubles as well as beauty. This is one of my personal favorite tracks.

“A Cajun Alley” has a fun sound, starting off like parlor music played by a slightly demonic, hopped-up Gershwin. Then it starts rolling, getting into a boogie woogie rock and roll style, and maintaining a lively feel throughout. “A Blade Of Grass” has a gentle quality, and “Outgoing Tide” is a gorgeous piece with classical sounds and a surprisingly playful ending. Then “Summertime” comes on like a cool, sly cat, strutting about the place. This is a wonderful take on the popular Gershwin number. I’ve said it before, but you can never go wrong with Gershwin, and this is another of my favorite tracks. This one has drums and bass, and is delicious and fun. “Roll’n Jelly” is short, but wonderful, being a nod to Jelly Roll Morton.

“B&W Blues” is a cool tune, mixing blues and jazz, and is one of the tracks to feature other musicians. Rob Statham is on bass, and Frank Scully is on drums. This tune is a delight, with some great stuff on keys, a groovy bass solo and an unusual drum solo that I really dig. “The Dreamer” is another moving piece, this one written for the 1984 film Best Revenge. “Barrelhouse Shakedown” is a fun tune, that boogie woogie keeping things moving, with a bit of ragtime as well. This tune was originally released as the flip side to Keith Emerson’s 1976 single “Honky Tonk Train Blues,” and was also included on the 1977 Emerson, Lake & Palmer album Works Volume 2 (on both of those releases, it was written as “Barrelhouse Shake-down”).

“Soulscapes” is pretty, friendly tune, like a gentle, loving hand on your shoulder. Ah yes, we will make it through, with a bit of guidance, a bit of companionship. That’s followed by a live version of “Close To Home,” a song included on the 1992 Emerson, Lake & Palmer album Blood Moon. This version is from a concert in London in 1992. That’s followed by another live track, “Honky Tonk Train Blues,” this one from a BBC television series, and it includes a brief introduction. This is great, joyous, old-time boogie fun, with a full band, including horns. Fantastic stuff! The disc then concludes with a medley of songs recorded when Keith Emerson was in his teens. This is a delight, sounding at first like the soundtrack to a silent film. This isn’t the only music released from Keith Emerson’s teen years. A few years ago, the self-titled album from The Keith Emerson Trio was released.

CD Track List
This special re-issue of Emerson Plays Emerson was released on September 29, 2017.
Posted by Michael Doherty at 3:48 PM