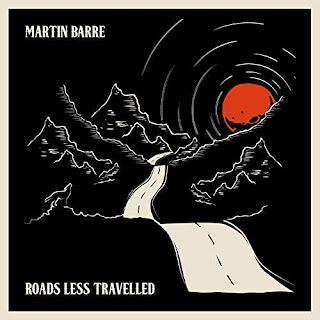 Martin Barre is known for his decades of work in the band Jethro Tull, where he played multiple instruments, including guitar, mandolin and lute. On his new solo album, Roads Less Travelled, he also plays several different instruments – acoustic guitar, electric guitar, mandolin, mandola and banjo. Joining him are vocalists Dan Crisp, Becca Langsford and Alex Hart, as well as Alan Thomson on bass and Darby Todd on drums. All the tracks on this album are originals, written by Martin Barre.

The album opens with “Lone Wolf,” with Dan Crisp on lead vocals. He, by the way, sings lead on the majority of the disc’s tracks. “Let me do the talking/Don’t need another reason/Got to pay them bills.” What I especially love about this track is the way that the mandolin and banjo are used. The presence of bluegrass instruments works almost in juxtaposition to the harder progressive rock sounds, and yet the sounds mix well. The results are interesting and seriously cool. That’s followed by “Out Of Time,” which has more of a steady, straight rock sound, with a strong pulse. “We’re always out of time/We always run out of time/We always run out of time.” In general, however, I prefer the tracks that have mandolin, such as “I’m On My Way.” I found myself singing along with the title line of this one before the end. And check out these lines: “Could tomorrow bring a better day/Fill my pocket and my soul/A stubborn streak/Deep down inside/Keeps me on my feet/And off my knees.” This track also boasts some good work on electric guitar.

Josiah J joins the group on organ for “Roads Less Travelled,” the album’s title track. The phrase “road less traveled,” of course, comes from the final lines of Robert Frost’s famous poem, “The Road Not Taken”: “Two roads diverged in a wood, and I—/I took the one less traveled by,/And that has made all the difference.” And in this song, Dan Crisp sings of finding “a new way forward” and taking “no shortcuts.” But the line that stands out for me is “Break down the walls I helped build so high.” Becca Langsford then takes lead vocal duties on “Badcore Blues,” a delicious bluesy song with soul, one of my personal favorite tracks. I love Martin Barre’s work on acoustic guitar here. That’s followed by “Seattle,” which is something of a love letter to that city, with references to Jimi Hendrix and to the rain. I always enjoyed myself in Seattle, even though my van would break down every time I drove there (seriously, every time). Josiah J joins the band again on “For No Man,” this time on percussion as well as organ. “Put your head on my shoulder/We can dream ‘til the sun shines on us/I believe in my heart we can change everything.”

“(This Is) My Driving Song” comes on heavy, but this track is another that finds Martin Barre playing mandolin as well as guitar. And, as is probably clear from its title, it is a song I’ll be adding to my road trip play list. It is about the pleasure of driving with music playing. “I’ve got no map or fancy phone/Just a dream that’s in my head/Got no need for company/The music feeds my every need/This is my driving song/My symphony.” I did one solo cross-country trip, and music was definitely my company. That’s followed by “You Are An Angel,” with Alex Hart taking lead vocal duties. This song has a mellower, sweeter vibe, and her vocal delivery has a bit of a jazzy feel. Buster Cottam plays double bass on this track. Then we get the album’s sole instrumental tune, “Trinity,” which is another of my favorite tracks. It has something of a light, positive vibe, and changes direction halfway through, after the briefest of pauses. Martin Barre plays all instruments on this track. The disc concludes with another of its highlights, “And The Band Played Only For Me,” sung by Becca Langsford. I love her vocal delivery, particularly on lines like “My memories are gathering dust” and “Times have changed, but the bands still play/And the ghosts of the dancers perform.” Josiah J once again joins in on organ. I really dig the jam partway through.