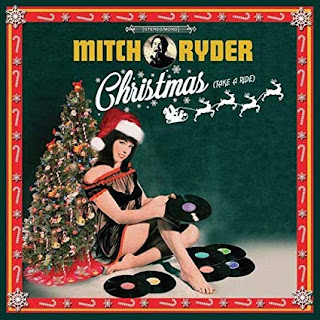 Last year I saw Mitch Ryder And The Detroit Wheels at the Simi Valley Cajun And Blues Music Festival, and they were excellent. Their set was definitely one of the highlights of the weekend. And I thought, Mitch Ryder still totally has it, he should put out a new album. And now he has. I didn’t expect it to be a holiday record, but I wasn’t specific in my wish, I guess. And everyone, it seems, has to put out a holiday album at some point. The Monkees just released one. And now we have Mitch Ryder’s Christmas (Take A Ride), the title obviously a play on one of his most famous singles, “Jenny Take A Ride.” And it’s enjoyable. Mitch Ryder gives the songs a classic rock and roll feel, which I love. And he makes some good selections as far as the material goes.

Mitch Ryder kicks off the album with a good version of “What Christmas Means To Me,” a song written by George Gordy, Anne Gordy Gaye and Allen Story. It’s been recorded by a lot of artists over the years, perhaps the most famous version being that by Stevie Wonder. That’s followed by “Blue Christmas,” one of my favorites. This is a Christmas song that I’ve always liked, and Mitch delivers a nice rendition, with a bit of a country sound in his vocals at moments. We then get a good rock and roll rendition of “Santa Claus Is Coming To Town,” with something of a classic sound. Of course, the version we measure all other rock versions by is Bruce Springsteen’s. This one has a different vibe, not as raw or immediate, but with a fun groove and full sound. That’s followed by another song that Stevie Wonder has recorded, “Someday At Christmas” (this was used as the title track for Wonder’s own holiday album). I really like this song, and Mitch Ryder gives a heartfelt vocal performance. It has a hopeful and sweet sound, perfect for the holiday (and for any day, really). Here is a taste of the lyrics: “Someday at Christmas we'll see a land/With no hungry children, no empty hand/One happy morning people will share/Our world where people care.” I don’t think it will be this year, but maybe one year soon. And the song’s lyrics address this: “Someday all our dreams will come to be/Someday in a world where men are free/Maybe not in time for you and me/But someday at Christmas time.” I love that those lines are both sad and hopeful.

Mitch Ryder also gives us a fun rendition of “Jingle Bell Rock.” Even as a child, I was not a big fan of Christmas music; this song, however, was an exception. I remember enjoying that Bobby Helms recording, and wishing that “Jingle Bell Rock” would just completely replace “Jingle Bells.” That’s followed by one of the best song selections of the album, a cover of The Sonics’ “Santa Claus.” This one comes on strong with a great heavy 1960s rock sound. It’s a song in which Santa Claus is directly addressed, and asked for things. There are several songs that do that, including “Santa Baby” and even The Kinks’ “Father Christmas.” The surprise here is Santa’s response, when asked what he’s going to put under the tree: “And he just said, ‘Nothing, nothing, nothing, nothing, nothing, nothing, nothing.’” Awesome! And Mitch Ryder is definitely into it; plus, I dig that guitar work. This is probably my favorite track.  “Santa Claus, I’ve been waiting so long/Now don’t you, don’t you, don’t you do me wrong.”

I’ve mentioned it before, and I’ll say it again: I really hate the song “Rudolph The Red-Nosed Reindeer.” I consider it one of the worst songs ever written. A while back I posted an analysis of the song, so I won’t get into the reasons again. What I’ll say is that Mitch Ryder’s rendition here has a 1950s rock and roll atmosphere and sound. That’s followed by “Christmas (Baby Please Come Home),” another song with a sweetness to it that I really like, and a passionate vocal performance from Mitch Ryder. It was written by Ellie Greenwich, Jeff Barry and Phil Spector, and originally recorded by Darlene Love. We then get a version of “Sleigh Ride” that takes basically the same approach as the version by The Ronettes, with that same opening.

“Grandma Got Run Over By A Reindeer” is a playful choice, to be sure, as it is a novelty song, and it’s a more recent composition than the album’s other tracks. Mitch Ryder gives it a classic sound, though the song was originally released in the late 1970s. That’s followed by a somewhat goofy and fun rendition of “Let It Snow” (often titled “Let It Snow! Let It Snow! Let It Snow!”). I don’t think I’ve ever heard a version quite like this one, and it is definitely worth checking out. The album then ends with “Put A Little Love In Your Heart,” a song that is clearly not a holiday song, but one that taps into that sense of compassion that is associated with Christmas. And it’s a good version, working to raise my spirits. This is a song we need right now, and is another of my favorite tracks.

CD Track List
Christmas (Take A Ride) was released on October 26, 2018 on Goldenlane Records, a division of Cleopatra Records. And guess what? Word is Mitch Ryder is recording another album, a non-holiday album with some special guests, and it should be out in the spring or summer. I am excited by this news.
Posted by Michael Doherty at 9:46 PM