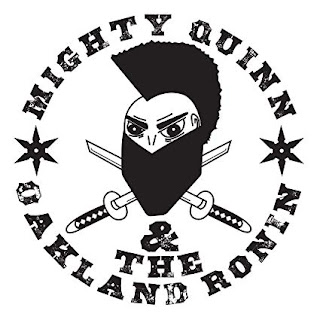 I’ve been trying to maintain my sanity lately by greatly limiting the amount of news I read, and refraining as much as possible from engaging in debates with the fascist morons that support that racist turd Donald Trump. It’s difficult, as you know. I am furious. I am depressed. I am worried. What helps is listening to music, and sometimes what I need more than anything is the energy and attitude of a punk record. When I put on the self-titled debut CD release from Mighty Quinn & The Oakland Ronin, all I wanted was that energy, that drive, to let out some steam, and it worked perfectly. But I got more than that. This is a really good album, featuring some great material. The band is made up of Quinn Walker on vocals, Geoff Saba on guitar and vocals, Andrew Muhoberac on bass and vocals, and Joel Davidson on drums and vocals. Though this is the debut release from this band, it is not Quinn Walker’s first release. That came eight years ago, with the My Road EP. And several other releases followed. Mighty Quinn & The Oakland Ronin are based in – can you guess? – Oakland, California.

The album opens with “The Nu Punks,” the title first making me wonder if it would be about Greek punks discussing the alphabet. It has something of a good pop flavor right at the start (with that catchy “do-do do-do-do” bit), then kicks in with an energetic force, and is exactly the kind of fun I’m looking for. And we are off to a good start. That’s followed by “Meet The Ronin,” which has a bit of a spoken word introduction: “Hey, everybody, this is Mighty Quinn and the Oakland Ronin. We’re going to show you how we get down.” And halfway through, Quinn introduces the band. It’s not a bad song, but not as interesting or exciting as what follows. “Kilt Kimono” has lyrics about troubled teen years, and a great driving beat. “And when you’re screaming and rolling on the floor/That’s punk rock for sure.” A different version of this song was made available digitally last year, and then it was titled “Kilt & Kimono.” This new version is shorter, without that extended ending.

“Headfirst” is one of my favorite tracks, coming on fast and strong. This is exactly what I’m looking for, a song to make me throw myself around the room, smiling the whole time. “Hey, you, you’re the one I want to come home at the end of the night/So come over now/Hey, you, you’re the one I’m talking to/You know I’m going to treat you right.” And these lines always make me happy: “I hope your daddy don’t mind/That I’m the best you can find.” How are those for some honest lyrics? This tune is a lot of fun. It’s followed by “BFF.” Okay, as much as I absolutely detest abbreviations like BFF, I dig this song, particularly the spoken word part: “Research suggests that individuals with less social connection have disrupted sleep patterns, altered immune systems and a thirty percent higher risk of dying in the next seven years.”

I feel that the heavy driving force of “Squash It” could push me right through a brick wall, and yeah, that’s a good thing. “And it can’t be, can’t always be about the money.” That’s followed by “Rebel,” an awesome tune with a great groove. I can’t help but enjoy lines like these: “Well, you can’t trust pigs and politicians/Government officials gonna tell you what to do/Tell them go to hell and fucking good for you/Because I’m a rebel/Yeah, I’m a fucking rebel.”  A different, shorter version of this song was previously released online. Then “Town” has a fairly serious tone and a steady beat. A different and much shorter version of this one also was previously available online.

“Love Vs. Bankers” is one of my favorites. It is a timely song about love being more important than money in a world that is run by the disgustingly rich (with some lines directed at the rich). Sure, we all need money to survive, but let’s not allow the quest for money to be our driving force.  “Well, the thing about love is you can’t control it/Love’s just too big to try to hold it.” It also has a delicious groove and tremendous energy. As with several of the other tracks, an earlier version of this song was released last year. That’s followed by “Anxiety,” another track that feels timely, and one that is in the same realm as “Love Vs. Bankers,” with lines like “Everybody’s greedy, got to get it to win/I want it, you want it, we all want it all/Just a bunch of greedy gods waiting to fall/And you think you're everything.” This one comes at us with speed and energy and attitude, and then is suddenly gone. Ah, those short, powerful punk songs, in and out, say what you need to say and then be done, no need to wrap it up in pretty ribbons and nonsense. “L’Oakland” has a heavy sound, and was previously released as “Jolly Roger.” The disc then ends with a fun rock tune titled “Mickey Got Married.” This one makes me laugh, with lines like “Mickey got married too quick/Now he’s got a little kid who’s a dick/Now what you gonna do about that?” Of course, part of it is that it feels like it could be an alternate reality of mine, had I gone down a different path and continued to go by Mickey rather than switching to Michael in my early teens.

CD Track List
Mighty Quinn & The Oakland Ronin is scheduled to be released on November 2, 2018, and will be available on both CD and vinyl.
Posted by Michael Doherty at 7:14 PM