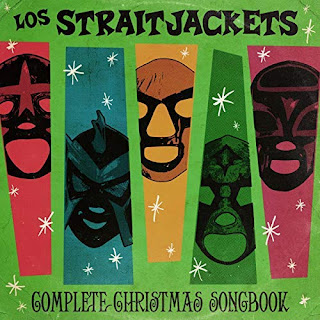 Every year, just over fourteen million new Christmas albums are unleashed on the public. And most are covering the same material, picking from a group of only twenty or thirty songs. It’s weird. But some of those albums manage to be quite good. In general, instrumental Christmas albums are better than those with vocals, because the lyrics are often insufferable. So a compilation like Los Straitjackets’ Complete Christmas Songbook has a leg up on most of the other releases before it even begins. This band also mixes up the track list a bit, which I appreciate. Sure, most of the music is still traditional fare, but there are also a couple of original compositions thrown in, and a lot of the traditional songs include nods to other non-holiday tunes, in a fashion similar to that employed by The Ventures on The Ventures’ Christmas Album. Los Straitjackets have been around for something like twenty-five years, and in that time they’ve released two Christmas albums, plus some holiday singles. All that music is collected here to aid in your holiday enjoyment.

This compilation kicks off with a rock and roll surf rendition of “Here Comes Santa Claus.” This is not a great song, obviously, but once you take out the lyrics, it becomes a whole lot better. The trick is to enjoy it without letting the lyrics creep into your noggin. That’s followed by “It’s A Marshmallow World,” which is a song of winter, not precisely a Christmas song, though it has long been associated with the holiday. It has an easygoing pleasant vibe, with a catchy guitar line. Then “Feliz Navidad” begins with a nod to “La Bamba.” This is a sweet, cheerful rendition of “Feliz Navidad,” and partway through it returns to “La Bamba.” That’s when the guitar begins to rock. “Jingle Bell Rock” has a good beat, and is a fun and lively track. They follow that by “Rudolph The Red Nosed Reindeer,” a choice I just can’t condone, even though the version they offer is an instrumental, combined with a slowed-down “Tequila.” “Rudolph The Red-Nosed Reindeer” is one of the worst songs ever written.

But that is followed by one of the disc’s best tracks, a seriously cool surf rock rendition of “God Rest Ye Merry Gentlemen.” This is definitely one you should add to your holiday play list. Los Straitjackets add in a bit of Del Shannon’s “Runaway.” Then we get an excellent version of “Frosty The Snowman” (okay, that sentence felt bizarre to write). It opens with a great big band beat. Yeah, this version has some swing to it, making it one of the best versions out there. And then after the second drum solo, it begins to really rock. I’m not kidding. I love that guitar.

“Christmas In Las Vegas” is an original composition, written by Danny Amis, Eddie Angel, Peter Curry and James Lester. It begins with what sounds to me like a fast bit of “Brazil,” which is great. I also really like the bass line, and there is a delicious moment on the drums. The other original composition is “Christmas Weekend,” one of my favorite tracks. It opens like an early Who song or a tune from The Creation or something, and it just rocks from there. That’s followed by “Little Drummer Boy,” which was always one of my favorite Christmas songs. Growing up, I was particularly fond of Joan Jett’s rendition. This version by Los Straitjackets is excellent, and is another of my favorite tracks. Then we get a sweet rendition of “The Christmas Song,” the last of the tracks from ‘Tis The Season For Los Straitjackets.

The next ten tracks are from Yuletide Beat, beginning with a really fun version of “Deck The Halls.” That’s followed by a seriously cool rendition of “We Three Kings,” that surf guitar at the beginning coming on strong. I don’t recall ever hearing a version quite like this one. Another of the disc’s highlights is “Groovy Old Saint Nick,” a fantastic track, with a nice vibe and plenty of great stuff on guitar. That’s followed by “Silent Night Rock,” sounding like a peaceful Christmas night on a beach in Hawaii, at least at first. And what could be better? Then it suddenly kicks in to become a fast-paced rock and roll tune. I like this take on the classic holiday song. I also really like what Los Straitjackets do with “Joy To The World.” It begins like one of those great Stax tracks, and then the guitar at times has a distinct CCR sound. Yuletide Beat concludes with “Soul’d Lang Syne,” a song for New Year’s Eve, not Christmas, but one of the best tracks either way. It has a delicious groove, and I love the sax.

“Holiday Twist” is a track from the Oh Santa! compilation, and is the only track on this disc to feature vocals. That’s George Miller on vocals. It’s a goofy, fun tune. “Wrap your muffler around your throat/Put on your gloves and overcoat/And shake it to the left and to the right/And do the holiday twist tonight.” That’s followed by “Hark The Herald Angels Sing,” which was released as a single, and then its flip side, “Silver Bells.” I always thought “Silver Bells” was a pretty song, and this version retains a lot of that vibe, while adding a dash of rock and roll, particularly in the guitar. Far and away the best Christmas television special is A Charlie Brown Christmas, in large part because of Vince Guaraldi’s music. This compilation concludes with a cool rendition of “Linus And Lucy” recorded live in Boston and originally included on The Quality Holiday Revue Live.