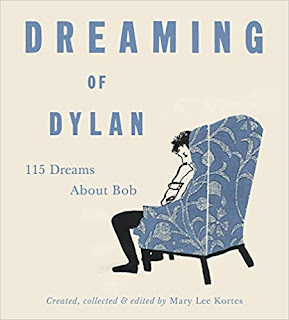 Once I started getting into Bob Dylan on my own (meaning when I branched out from my parents’ copy of The Freewheelin’ Bob Dylan), one song that stood out for me was “Bob Dylan’s 115th Dream,” from the Bringing It All Back Home album. Up to that point, I hadn’t heard anything quite like it (I was probably 14 at the time). The song’s tale feels like a dream, the way it contains its own strange logic and order of events. The title of the new book from author and singer Mary Lee Kortes clearly makes reference to it. Dreaming Of Dylan: 115 Dreams About Bob is a collection of dreams that various people have had about Bob Dylan. It’s an unusual and cool idea for a book. While I’ve had plenty of Grateful Dead dreams over the years, I don’t think Dylan has ever been present. But he has been for many people. The idea for the book came from Mary Lee Kortes’ own recurring dream about having dinner with the famous songwriter. That is not her only connection to Dylan, of course. She released a live album in which she covered the entire Blood On The Tracks album (which, as I’ve mentioned before, is still my favorite Dylan record).

While a couple of the book’s contributions are from people you are likely aware of (Patti Smith and Jimbo Mathus), most of them are from folks you’ve probably never heard of, people from various parts of the world, and of different professions. Several dreams, as you might guess, involve the dreamer playing music with Dylan. But Dylan isn’t always a musician in these dreams. In some, he is a photographer, a police officer, and even president of the United States. Oh, if only he were the president right now. Speaking of that, some of these dreams must be recent, for at least two of them mention the current bastard occupying the White House. Some of the dreams had me laughing. A contributor from New York writes: “We were somewhere in California, perhaps a coffee shop around Malibu. In the dream we spoke briefly, and he acknowledged my presence as not being too bothersome.” Wonderful! And of course, that strange way that dreams progress is part of many of these tales, with a person in Michigan writing, “Dylan walked up behind me, and I took my shoe off, bent my leg so that the bottom of my foot was facing him, and my foot started singing to him, ‘It’s All Over Now, Baby Blue.’” Or this, from an anonymous source: “I look back at Dylan. He’s taking a guitar out of the freezer, and I think, ‘Oh, that’s who that belongs to.’” The book also contains lots of photos and illustrations related to the dreams described in these passages.

I wonder what Bob Dylan will make of this book. It must be a strange sensation, knowing you’re the subject of strangers’ dreams. By the way, the dreams are numbered, but aren’t presented in numerical order. I’m not sure the point of that. What do the numbers then signify? The order in which Mary Lee Kortes received the contributions? Nothing? Is that sort of the point – that, like dreams, the numbers have absolutely no logical significance whatsoever?

Dreaming Of Dylan: 115 Dreams About Bob is scheduled to be released in a hardcover edition on November 13, 2018 through BMG Books.
Posted by Michael Doherty at 11:59 AM