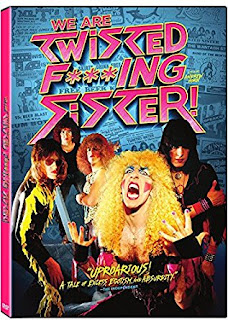 In 1984, Stay Hungry was released. I got it, loved it, played that cassette over and over, especially “We’re Not Gonna Take It.” I turned up the volume and shouted the lyrics along with Twisted Sister lead singer Dee Snider, aiming my voice at my parents, at the world. I was twelve years old. Like a lot of people, I thought Twisted Sister was a new band. I was wrong. So wrong. The band was twelve years old too.

We Are Twisted Fucking Sister! (and, yes, that’s the title that appears on screen – fuck those bloody asterisks on the DVD cover) tells the story of this band’s long, slow rise to fame. Twisted Sister was essentially a bar band for a decade – the most determined, hardest working bar band ever, perhaps. It is a fascinating story for any music fan (no, you don’t have to be a Twisted Sister fan to enjoy this documentary), and for anyone who appreciates an overcoming-the-odds type of story. When the film opens, we hear an audio warning over a black screen: “The act you’re about to see is not for the faint of heart. Twisted Sister has been accused of using foul, indecent and profane language during the course of their show.” And then we’re treated to some concert footage from 1982. After a moment, a title card reads “3267 shows earlier,” and we’re back in New York in 1972. Yeah, holy shit! That’s more shows than the Grateful Dead played in thirty years, and that band toured all the time.

The documentary features interviews with the band members, focusing on guitarist Jay Jay French and lead singer Dee Snider. Jay Jay French takes us back to the earliest days of the band, when the lineup was different, including a different singer, telling us about the band’s first gig playing to an audience made up of soldiers. Among the lineup changes in those early times was the addition of Dee Snider, who had been in a band called Peacock. There is information on the New York music scene of the 1970s, and how the clubs didn’t want bands to play original music. For a while, Twisted Sister was a cover band, and the film treats us to footage of them covering David Bowie’s “Suffragette City” and “Rebel Rebel,” as well as Velvet Underground’s “Sweet Jane” (which had an interesting audience participation moment).

In addition to interviews with band members (including original members), this documentary includes interviews with the band’s managers, club owners and fans. And Suzette Snider (Dee’s wife) talks about seeing the band for the first time, and tells some funny anecdotes, like about what got her to start making clothes for Dee and the rest of the band. The band’s look was important, and the documentary gets into some detail about the clothes and makeup and so on, with the band members offering their own thoughts on it.

But what is fascinating is the lengths they would go in their determination to make it, and the number of times they got so close only to have something go wrong. Like the time they sold out the Palladium in 1979 without a record contract, and then had to postpone the show after a band member had a seizure. And the idea of putting on an entire rock concert for one record label executive is insane. Even after they finally recorded some music, they couldn’t get a record deal, so they put out the music as singles on their own label. These guys even bought air time on the radio, ad spots for their shows, but with one of their songs playing throughout the ads so that it was almost like the song got airplay. Brilliant. And even after they signed with a British label and recorded an album in the UK, things still went wrong.

The story of the efforts to get them signed to Atlantic is also wild. This documentary tells the tale of the band leading up to Stay Hungry, but ends without getting into that record or mentioning that memorable music video for “We’re Not Gonna Take It” (with its ties to Animal House). In fact, neither of the band’s two biggest hits – “We’re Not Gonna Take It” and “I Wanna Rock” – are heard or even mentioned in the film. The documentary is really about the band getting there, not being there.

This two-disc set contains plenty of bonus material. The first disc features a commentary track by director Andrew Horn. He mentions that the disclaimer at the beginning was from a live tape from Vermont. He also says he wasn’t a Twisted Sister fan (interestingly, he was a Deadhead in high school), and tells the story of how he got the idea for doing this project, and how the project grew as he learned more about the band. It’s surprising that he had trouble getting financing for this film. The first disc also includes the film’s trailer.

The second disc is all bonus footage, deleted and extended scenes, arranged by subject, including more concert footage (they play “Train Kept A-Rollin’”) as well as more interview footage. Dee Snider talks a lot about connecting with the audience. He even mentions that a Twisted Sister concert was like The Rocky Horror Picture Show, as far as audience participation. He also talks about singling out people who didn’t seem like they were enjoying themselves. There is also stuff about how Jay Jay and Dee would pretend they were high or drunk at concerts, even though neither of them ever drank or did drugs. They even sing, “Hey, hey, we’re the junkies,” a play on “(Theme From The) Monkees.” There is a funny anecdote about Jay Jay’s former teacher wanting a Twisted Sister T-shirt, and some hilarious stage banter about a new Olympic event. Jay Jay also tells a funny story about a stint as a waiter. There is plenty of interesting information in this bonus material. One fan mentions that Dee Snider would sit out the third set, and the band would just jam. There is approximately two and a half hours of bonus footage on this disc.

We Are Twisted Fucking Sister! is available as a two-disc DVD through Music Box Films.
Posted by Michael Doherty at 3:33 PM