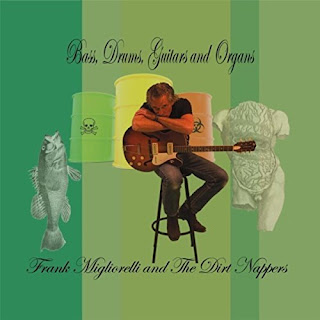 Bass, Drums, Guitars And Organs, the new album from Frank Migliorelli And The Dirt Nappers, features some delicious pop tunes, with a bit of country, a bit of rock and roll, some good lyrics and plenty of positive vibes. It’s all fairly straightforward, and it’s that approach wherein lies its charm. We’re all desperate to feel better, to regain our optimism, and it’s so bloody difficult while that mendacious cretin occupies the White House. But this music can give us a temporary reprieve, help us regain a bit of balance, maybe even restore some joy. Yes, the nation’s capital is full of despicable, dishonest people who seem to enjoy tearing the country apart, but that doesn’t mean we aren’t allowed a little personal joy. And it certainly doesn’t mean we should stop dancing. Bass, Drums, Guitars And Organs features all original material, written by Frank Migliorelli. The band includes Frank Migliorelli on vocals, guitar, harmonica and keyboard; Phil Cimino on drums and cajon; Tony Tino on bass; Andy Stack on guitar; Michael “Booker” Heaphy on pedal steel and backing vocals; Jeremy Baum on organ and piano; and Eric Puente on percussion. They’re joined by some guest musicians and vocalists on certain tracks.

The band kicks off the new album with “When She’s Walking By Your Side,” a pop song with bright energy, a bit of Tom Petty and a bit of 1960s pop. It’s a song of love and joy, with an innocence. It seems designed to make you feel good, and is a perfect song for summer. Here is a taste of the lyrics: “Maybe there’s a way/You could put it into words/It should be easy to explain/It’s just a boy and girl.” I love that. After all, isn’t that seemingly simple thing the focus of so much writing and thought? “Don’t the lights shine much brighter when she’s walking by your side/Don’t the stars look like diamonds when she’s walking by your side.” That’s followed by one of my favorite tracks, “I’ve Been On My Knees.” This one has a nice, steady groove which works on me immediately. But it’s this song’s lyrics that make it stand out: “I’m not begging for forgiveness/I don’t even know my crimes/I’m not hoping for redemption/’Cause I’m running out of time.” This song is a good companion as we each work our way through our individual troubles. Are we on our own?

“Handful Of Rain” is, for me, another of the disc’s best tracks. It creates a vivid portrait of a woman, and of the man who now thinks back on her. It contains a little nod to Bob Dylan in lines like, “Somewhere out on 61 she needed shelter from the storm.” And it does have that kind of Dylan thing, describing a relationship of the past, one that is still very present for the man singing it (like “Tangled Up In Blue”). The song is a mix of pop and country, basically sounding like a great bar band tune. And check out these lines: “She loved to drop the top down/And let the sun change her skin/But no matter how hot it got outside/There was something burning more within.”

“Baby Put A Dress On” is upbeat tune about going out, drinking and dancing, you know, celebrating on a Friday night. It’s a fun and innocent song. “There’s a place by the highway where a band is playing all night long/Don’t be a wallflower, don’t keep me waiting here too long.” From a song about going out on a Friday night, the band moves to a song about going out on a Saturday night. “Wound Up Woman” has a classic rock and roll vibe, and a sense of humor in lines like “She pays off her Visa with her Master Card” and “She’s running through the trailer park lookin’ for some Aqua Net” and “Her name’s on a hundred tattoos.”  The first time I listened to this album, I misheard the line “Her fishnets have got a tear” as “Her fishnets have got a tail.” I sort of prefer the line as I heard it, and maybe will use it in something. Anyway, this is a cool Saturday night party song.

From the moment “Rockin’ In The Moonlight” starts, I dig it. Its rhythm, its style, its jazzy guitar are all delicious. And then on top of all that, there are some delightful backing vocals by Sherryl Marshall. If you’re in need of a song to lift your mood, this ought to do the trick. “Now I’m standing in the moonlight/Praying for something so much more/So angel don’t you leave me here tonight/The night’s so clear and the moon is just right/All it’s gonna take is a step outside, and we’ll go/Rockin’ in the moonlight.”

The album then concludes with “Former Femmes Fatales And Romeos,” a somewhat depressing song about faded dreams, about life that has lost its charm and excitement. “Another night is gone/Watch it all fade away/Watch it all fade away.” And the characters of this song don’t make any attempt to get their hopes and dreams back, and that’s what makes this song so sad – not what’s happened, but what’s not going to happen. “That’s how life is, that’s how it goes.” And yes, I love this song. Mark Minkler plays bass on this track.

CD Track List
Bass, Drums, Guitars And Organs was released on March 15, 2017 on Rave On Records.
Posted by Michael Doherty at 11:35 PM