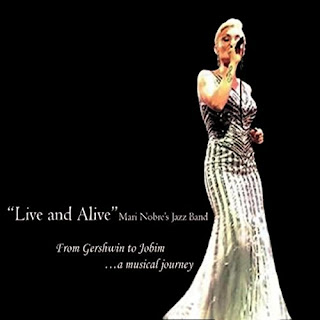 Mari Nobre is a talented jazz vocalist, originally from Italy, who sings in several languages. Her new CD, Live And Alive: From Gershwin To Jobim…A Musical Journey, is a live album featuring selections from a concert she performed at Jan Popper Theater at UCLA on May 27, 2016. As the title promises, she covers music by Gershwin and Jobim, and also compositions by Benny Golson, Alberto Dominguez and Leonard Cohen. Yes, it’s that last one that first got me interested in this album. There isn’t much stage banter included, just a “thank you” at the end of a number, and thanks to the band members at the end. The focus is on the music, and the music is seriously good. Backing Mari Nobre on this CD are her husband Leo Nobre on bass (Leo Nobre also did most of the arrangements), Justo Almario on saxophone and flute, Angelo Metz on acoustic guitar and electric guitar, Sandro Feliciano on drums, and Daniel Szabo on piano.

She opens the CD with “Chega De Saudade,” a famous bossa nova number written by Antonio Carlos Jobim and Vinicius de Moraes. Right away, the music sounds so positive, so full of joy, with Mari Nobre embracing life in such a strong and bright way that it’s difficult for the listener to not follow suit. There really is a lot of beauty in the world, she seems to be reminding us. Take the guitar work on this track, for example. The positive vibes of the music on this disc are likely to be at least partly due to the fact that Mari Nobre performed this concert just a few weeks after having surgery for cancer. Talk about bouncing right back, and not letting things get you down. Talk about strength. Mari Nobre covers two other Jobim compositions on this disc – “Retrato Em Branco E Preto,” which was co-written by Chico Buarque, and “Corcovado.” On “Retrato Em Branco E Preto,” Mari Nobre’s heartfelt vocal performance is at first accompanied only by Daniel Szabo’s delicate and beautiful work on piano, and that’s my favorite section of the track. The arrangement for this one was done by Mari Nobre.

One of my favorite tracks is Mari Nobre’s version of Benny Golson’s “Whisper Not.” This rendition begins with a slow, groovy bass solo, accompanied by just some finger snaps, establishing a cool atmosphere. And then, once it’s established, Mari Nobre comes in, and her vocals sound delicious. But everything about this track is delicious, including Daniel Szabo’s work on piano and a delightful lead on saxophone by Justo Almario. Though the Gershwin name is part of this CD’s title, Mari Nobre covers only one song by George Gershwin and Ira Gershwin, “Fascinating Rhythm.” Not a bad choice, though, right? She delivers an interesting rendition, beginning it slowly, then, when it kicks in, giving it a Brazilian rhythm. And I love Justo Almario’s work on flute. (By the way, if anyone hasn’t seen Eleanor Powell’s incredible tap-dancing scene in the 1941 film Lady Be Good, I highly recommend checking it out. It’s done to “Fascinating Rhythm,” and it makes me happy every time I see it.)

This album contains one original track, “Linda,” written by Mari Nobre and Patrick Lockwood, a song that was included on the Nobresil album Original. It’s a fun, joyful song. She also does a pretty rendition of “When I Fall In Love” and a fun version of “Frenesi.” But as I mentioned, the song I was most excited to hear (and the reason I first popped in this disc) is her rendition of Leonard Cohen’s “Dance Me To The End Of Love.”  I love Leonard Cohen, and this is the song with which he kicked off every concert I saw him perform. It’s from my favorite Leonard Cohen record, Various Positions. This is a cool, jazzy rendition, as you might expect. The vocals have a lightness and a playfulness that caught me off guard the first time around, and there is even a bit of scat. Wait, does she skip the “Dance me to the children that are asking to be born” verse, or did I just miss it? There are some nice touches on sax, and some wonderful work on bass, including a bass solo – another surprise the first time I heard this track. And for good measure, there is a drum solo near the end.

CD Track List
Live And Alive: From Gershwin To Jobim… A Musical Journey was released on April 21, 2017 on Chrome Records.
Posted by Michael Doherty at 3:13 AM