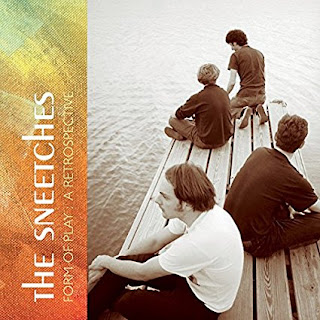 Even though music has played an important role in my life since early childhood, certain bands – for whatever reason – have nonetheless managed to escape my attention. Such was the case with The Sneetches. They were a pop band based in San Francisco, together for approximately a decade from the mid-1980s to the mid-1990s. And even though their last years were when I worked at a radio station in Oregon, I never heard them. Strange. But now I have the opportunity to become familiar with their music, through Omnivore Recordings’ new compilation, Form Of Play: A Retrospective. This disc includes twenty-two tracks, almost seventy-eight minutes of music, from the years 1987 to 1995. A few of the tracks on this CD were previously unreleased. The music here is some wonderful pop rock, with good harmonies and lyrics, and a bright, youthful energy. And there are some good lyrics, like this line from “What’s In Your Mind”: “It is too bad you had to go away to make my day.” All of the songs on this CD are originals. This collection includes liner notes from band member Alec Palao.

The CD opens with “Over ‘Round Each Other,” a ridiculously fun and catchy song from the band’s 1990 album Slow. This is pop at its best. How have I not heard this before? Near the end, around the two-minute mark, there is what sounds to me like a little Gershwin tease on guitar. It’s that bit from “Rhapsody In Blue,” the same part that Phish refers to on piano in the album version of “Bathtub Gin.” There is of course a bit of Beatles to this band’s sound too, heard in the guitars at the beginning of the next song “...And I’m Thinking.” This song was a single released in 1992. For “Voice In My Head,” another song from Slow, a horn section joins the band, adding another level of joy to this music. “The voice in my head has spoken for me once again/And if you will listen, he will be your closest friend.”

One of my personal favorites is “Don’t Turn Back,” from the band’s 1988 LP That’s All We Have. (And no, the songs are not presented in chronological order in this collection.)  This song is a total delight right from its opening moments, with its sort of relaxed folk groove and finger snaps. At moments it reminds a bit of The Mamas And The Papas, partly because of its wonderful vocals. And it builds from there. There are nice touches on harmonica by Matt Carges, and Steve Cornell plays steel guitar on this one. “I just want to let you know that things are not that fine/Something’s got to change inside your mind.” Another of my favorites is “Heloise,” a song that was originally on Slow. The version on this compilation is a live recording from 1994, and is one of the disc’s previously unreleased tracks. I’ve listened to the album version, and I prefer this live version. It’s a bit longer than the album version, and develops into a cool jam. Plus, I dig that bass. Also previously unreleased is this compilation’s version of “Julianna Why,” a song that was included on Think Again.

“Looking For Something” is another fun track, a pop song with something of a punk style (reminding me a bit of The Buzzcocks), and it works really well. This song was previously included on an earlier compilation, 1985-1991. It’s followed by a mellower, pretty song, “A Good Thing.” Here is a taste of the lyrics: “She’s in love with him/But he is not alone/The thoughts inside her head won’t go away.” “Let Us Go” has something of a relaxed vibe, plus some nice percussion. “It’s getting late/We’ll have to turn in soon/Pull up the covers/And let us sleep again/I can’t believe/What we have done/Just look around/Makes me wonder sometimes.”

“Unusual Sounds” has a distinct 1960s pop sound and groove and style, reminding me of several different bands from that time at various points. This song is the opening track of Sometimes That’s All We Have. This compilation then concludes with three previously unreleased tracks. The first is a live version of “A Light On Above,” and this is another of my favorites. “So take me by the hand and lead me back there/And take me by surprise but not for granted.” This is from the same concert recording that gives us “Heloise.” And the following track, “The Weather Scene,” is also from that same show, September 12, 1994 at the Great American Music Hall. The final track is a demo of “How Does It Feel,” a song that would end up on Slow. “But maybe someday you’ll hear me say/I’m glad to be here today.”

CD Track List
Form Of Play: A Retrospective is scheduled to be released on April 28, 2017 through Omnivore Recordings.
Posted by Michael Doherty at 9:21 PM