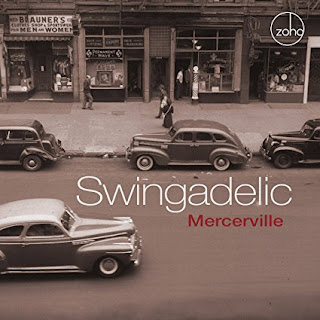 As John Bauers states in the liner notes for the new Swingadelic CD, Mercerville, the Johnny Mercer project was a labor of love. He and lyricist Johnny Mercer share the same birthday – November 18th – and his passion for Mercer’s music has been in place since his youth. Mercerville, then, is an album of songs co-written by Johnny Mercer, with arrangements by pianist/vocalist John Bauers. This album follows the group’s 2013 release, Toussaintville, a tribute to the work of Allen Toussaint, and 2011’s The Other Duke, a tribute to Duke Pearson, and so it is the band’s third straight tribute album. Johnny Mercer is certainly a good choice for such a tribute, as he wrote some of the most popular and enduring songs. You’ll likely be familiar with all of the material on this album. Joining the group for this release is vocalist Vanessa Perea. By the way, John Bauers has included some notes on each of the songs chosen for this CD.

Swingadelic kicks off the album with “Too Marvelous For Words,” a song written by Johnny Mercer and Richard A. Whiting, and featured in the film Ready, Willing And Able. It’s been recorded by folks like Frank Sinatra, Bing Crosby, Ella Fitzgerald and Nat King Cole. Swingadelic’s version is a fun and energetic big band production. Vanessa Perea in particular seems to having an absolutely fantastic time singing this one, and she does a superb job. That’s followed by an interesting rendition of “Ac Cent Chu Ate The Positive.” As for that introduction part (which is sometimes cut), Swingadelic delivers it with a kind of sexy swing feel, rather than the usual moral high-road thing, and that works well, as “the topic will be sin.” It’s like the preacher takes pleasure in knowing he’ll be tackling his favorite topic. Everyone’s favorite topic, right? And hey, this song certainly has a good message for all of us these days: “You've got to accentuate the positive/Eliminate the negative/Latch on to the affirmative.” This version features a nice lead on guitar by George Naha. Brian Bauers and Ashley Bauers provide backing vocals on this track. “Ac Cent Chu Ate The Positive” (usually written as “Ac-Cent-Tchu-Ate The Positive”) was written by Mercer and Harold Arlen.

Johnny Mercer wrote several songs with Harold Arlen, and Swingadelic covers four of them on this album. “Blues In The Night” was written for a film of the same title (though, as Bauers points out in the liner notes, the film was originally to be titled Hot Nocturne). A lot of artists have covered this one too, and this version has a slow-swinging blues groove that is delicious. I love the blending of John Bauers and Vanessa Perea’s vocals. Wonderful. This is one of my favorite tracks. That’s followed by “That Old Black Magic,” a song that’s been done by The Glenn Miller Orchestra, Frank Sinatra, Sammy Davis Jr., Rod Stewart and even Bob Dylan. This rendition by Swingadelic moves quickly, and it’s a great choice for delivery as a duet. The last of the album’s Mercer/Arlen compositions is “One For My Baby” (usually titled “One For My Baby (And One For The Road)”), which actually concludes the CD. It begins with a nice groove on bass, and features some good work on piano. Matt Teitleman plays drums on this track.

Swingadelic delivers a smooth, cool rendition of “I Wanna Be Around.” Johnny Mercer wrote this one with a woman named Sadie Vimmerstedt (Bauers includes that story in the liner notes). John Bauers sings lead on this one without Vanessa Perea. That’s followed by a fun version of “Goody Goody,” with Vanessa Perea on lead vocals. It has a bit of a New Orleans thing happening, which I love. It’s a delightful rendition. This one was written by Johnny Mercer and Matt Malneck. The version that inevitably comes to mind when I think of “Jeepers Creepers” is that by Louis Armstrong. It’s hard to compete with that one. That being said, the version on this CD is good, and features some nice work on piano. David Longworth plays drums on this track. That’s followed by another fun one, “The Glow Worm” (though when I hear this, I still think of Kermit The Frog eating that worm).

The band presents “Moon River” and “Days Of Wine And Roses” as a medley. Both songs were written by Mercer and Henry Mancini, both were written for films, and both received Oscars for Best Original Song, so I suppose it makes some sense to put them together. Vanessa Perea sings lead on this gentle, pretty rendition of “Moon River,” while John Bauers sings lead on “Days Of Wine And Roses.”

“G.I. Jive” is the one song on this album that Johnny Mercer wrote without a co-writer. Johnny Mercer had a hit with his recording of this one, as did Louis Jordan. I love the horns on this Swingadelic version. That’s followed by “P.S. I Love You,” a song that Mercer wrote with Gordon Jenkins. Of course, there is also a Beatles song titled “P.S. I Love You,” written by Paul McCartney and included on their first record, Please Please Me. Here, the two songs are combined. In the CD’s liner notes, John Bauers mentions that Paul McCartney had hoped to collaborate with Mercer on some material in the 1970s, but Mercer was in poor health. So here is a way to create such a collaboration.

CD Track List
Mercerville is scheduled to be released on May 5, 2017 through Zoho Music.
Posted by Michael Doherty at 10:54 PM