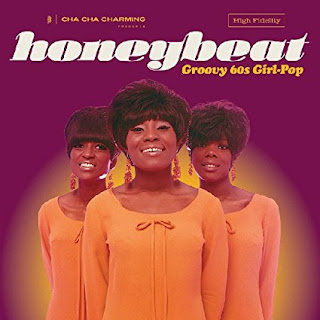 Sometimes it seems there is nothing better in the world than 1960s female vocal groups and solo acts. If you’ve got a hankering for some delicious, and largely forgotten, girl group gems, there is a new compilation that should totally delight you. Honeybeat: Groovy 60s Girl-Pop collects nineteen tracks from various artists, some of which you probably know, but several of which you may not have heard before. One of these songs was actually never before released. And Star Trek fans will be interested to know that what is probably the best track of this disc is a recording by Nichelle Nichols. Yes, Lt. Uhura. She does a fantastic rendition of “Why Don’t You Do Right?” But more on that in a bit. The folks that put together this compilation obviously have a lot of love and passion for the music, and in the extensive liner notes, information on each of the songs and artists is included, along with photos.

This CD gets off to a good start with “I’m Gonna Destroy That Boy” by The What Four. First of all, The What Four might be the best name for a quartet I’ve ever heard. And this song is a lot of fun, with some cool work on guitar. This track seems to be as much about the groove as it is about the vocals. It has a sudden ending. This song was released as a single in 1966. It’s followed by “You’re My Loving Baby” by The Sweet Things. And true to the band’s name, this song has a sweet sound. This one was also released in 1966. “Don’t Monkey With Me” is a bit on the silly side, with those “nah nah nah” vocals. They sound so young, so it’s strange when they sing “I’ve been hurt so many times before/I can’t take that kind of heartache anymore.” But I really like this track. There is a youthful joy and excitement and innocence that is wonderful.

One of my favorite tracks is Linda Carr’s “Sweet Hunk Of Misery.” The song definitely has a Surpremes-like sound, and that’s not a bad thing. It’s a twisted sort of love song, in which the woman knows her man isn’t a catch, particularly as he’s mean to her, but loves him all the same. The song opens with these lines: “He’s my big hunk of misery/And I love him/’Cause I can’t help myself.” Linda Carr gives us a somewhat playful vocal performance which helps make this an enjoyable tune. The title alone is amusing. “Sweet Hunk Of Misery” is followed by “If You Can’t Say Anything Nice,” a catchy song from Gia Mateo. Sandi Sheldon’s “Baby You’re Mine” was released as the flip side to her single “You’re Gonna Make Me Love You,” and it features a pretty vocal performance.

Skeeter Davis is one of the artists on this album that you’re likely familiar with. Known for her country albums, she began recording pop songs as well, including “I Can’t Stay Mad At You,” written by Carole King and Gerry Goffin. This song was a hit and was included on her Let Me Get Close To You LP. It’s a fun, bright pop tune, but is also about a woman staying with a man who’s probably not good for her. “You can run around/You can tell me lies/But there’s nothing I can do/I’ll never say goodbye/Because I can’t stay mad at you.” She even promises, “I’ll love you ‘til I die.” Poor girl. That one is followed by a song by another artist that you likely know, Erma Franklin. Sure, her sister Aretha became much more famous, but Erma recorded that phenomenal original version of “Piece Of My Heart” a year before Big Brother And The Holding Company also had a hit with it. On this compilation she sings “I Don’t Want No Mama’s Boy,” and it is her excellent, powerful vocal delivery that elevates this tune to something special.

“The Rider” is one of the most interesting tracks on the album. It’s by a band called The Pussycats, whom you might not have heard of. But you almost certainly have heard of band member Abigail Haness. She was later in the band Jo Mama, and also sang with James Taylor and Carly Simon, among others. She also played Janet in the original U.S. production of The Rocky Horror Show, and according to one book I read provided Janet’s vocals on the soundtrack to the film The Rocky Horror Picture Show. Anyway, “The Rider” is a cool, strangely haunting tune. This song is another with a sudden ending. In fact, because it’s so abrupt, I assumed the actual ending was missing. Fortunately, that’s cleared up in the liner notes to this collection.

Another of my favorites from this album is “No News” by The Glories.  This is a powerful song with passionate vocals, and some cool work on horns. This song was released as a single in 1968, one of the best and most intriguing years for music. Carmen Cole’s rendition of “I Just Don’t Understand” is another of this disc’s highlights. It’s such a cool tune. Ann-Margret’s rendition was included on The Definitive Collection, which was released in March. Carmen Cole delivers an excellent version, and this one too features good work on harmonica. That’s followed by an unusual take on Ben E. King’s “Stand By Me” by Little Eva. You know Little Eva from her hit “The Loco-motion” (which later was also a hit for Grand Funk Railroad). In 1965, she released this rockin’ rendition of “Stand By Me,” which is another highlight of this collection.

But my favorite track is Nichelle Nichols’ version of “Why Don’t You Do Right?” I’ve heard a lot of covers of this song over the years, and while I don’t think a single one of them has been bad, this one is a total delight. It’s just so much bloody fun, going in some unexpected directions. This one moves at a good pace, and opens with backing vocalists singing “Get out of town, get out of town.” And then Nichelle Nichols clearly has a good time with it. This track was actually the flip side to her single “Know What I Mean,” which was released in 1967, during the time when the original Star Trek series aired. This collection concludes with “Talk That Sweet Talk” by Dorothy Jones, a track that was previously unreleased. You probably know Dorothy Jones from her work with The Cookies. Here she delivers a song written by Gerry Goffin and Carole King. It was recorded in 1961, and it’s strange that it was never released before, because it’s a really good track, with a strong vocal performance. “Oh baby, you’re kneeling at my feet now/And telling me I’m sweet now/You’re saying things that only time will show/Honey, talk that sweet talk/On Monday morning/Then I might believe that it’s so.”