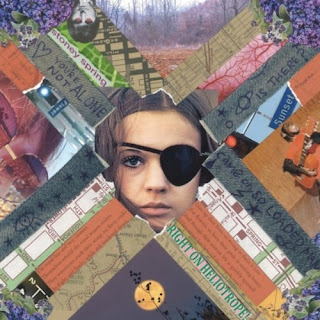 Barry Smolin hosted what was perhaps my favorite radio program of all time (yes, including my own), “The Music Never Stops.” It was a four-hour show on KPFK Friday nights (later it became a two-hour show on Sundays) here in Los Angeles. The show focused on Grateful Dead concert tapes, and also explored the music of other so-called jam bands. One of the show’s most important segments, at least to me, was the local music section, with which Barry began the show each night. I was turned on to a lot of great bands through that segment. One of those bands was I See Hawks In L.A. In the band’s early days, it was composed of core members Rob Waller, Paul Lacques and Anthony Lacques. And even after Anthony left the band, those three musicians continued to play together, creating a group called Stoney Spring, and putting out (so far) a couple of albums. The first was 2013’s Right On Heliotrope! The music is somewhat looser than what they did (and do) in the Hawks, more in the alternative folk realm than country (but with psychedelic elements), and the principal songwriter and force behind these songs is Anthony Lacques. Anthony plays the majority of instruments on this release – piano, acoustic guitar, drums, bass and some vocals. Though Jimi Hawes joins him on bass for four tracks. Rob Waller contributes the vocals, and Paul Lacques plays electric guitar and lap steel.

You get the feeling this music was created spontaneously, and the microphones happened to catch it, particularly on the first track, “New Blood,” which has a very loose and immediate vibe, with many of its lines spoken or even shouted from the background. It’s followed by “Jobs,” a playful song with a serious subject. “And I don’t blame Steve Jobs/For turning rock and roll into a store at the mall/I blame you and me for accepting the seduction/Of being normal.” This song boasts some excellent lyrics. Certain lines and phrases stand out, such as “our sleek, sexy, crumbling civilization” and “a prescription to cure ambiguity and confusion.” And I love this line: “To turn those sins into a lifestyle.” Perfect! And then they add, “And a product…and an industry…and an identity...a badge of honor.” I wish I could play this song for… well, basically for everyone. I can almost imagine this song as an important number in a musical. A different kind of musical, to be sure. Like no musical I’ve ever seen, but a musical I’d want to see. This song has a false ending. Jimi Hawes plays bass on this track. “Jobs” was written by Anthony Lacques and Rob Waller.

The lines from “Revenge Rock” that stand out for me are, “Don’t whisper your bullshit to me/There’s no muse in your music.” And, “Just because you grew a beard/Doesn’t mean that you’re weird.” Man, I love this. That loose feel and play with language reminds me a bit of Syd Barrett’s solo work (by far, the most interesting and creative member of Pink Floyd). That’s followed by “Class Of ’74,” a very cool instrumental tune with a kind of jazzy vibe, like if the Peanuts gang decided to smoke a little pot. I particularly dig the piano here. Jimi Hawes plays bass on this one.

“Class Of ‘75” contains a David Bowie reference, reminding me again of that great version of “Five Years” that I saw I See Hawks In L.A. perform recently. This song describes a certain character from school: “She never cared about the surfers/Or football players with cars/Jody was into music/Ziggy Stardust and the Spiders From Mars.” We all knew a girl like this in high school, right? Or is this song’s imagery and character so vivid that I’m creating my own Jody? It’s possible, but the image in my head is so clear I’ll just take it as memory rather than invention. But I suppose it doesn’t matter. “And for the first time I realized how the sun kept track of time.” That’s followed by one of my favorites, “Pleasure Quest.” It has a fantastic vibe, reminding me of some of the best folk-rock of the late 1960s and early 1970s. I love the percussion. “The artist’s life is short and cheap/Always worry, never sleep.”

“I Got A Map” has more of a laid-back country feel. “No one’s watching you, and there is no God…except maybe God.” And then “Stick Shift” comes as a surprise. It opens with a sound effect of a car, then comes on as a strange, funky joke, I mean just listen to the way they deliver the line “Stick shift.” The vocals (Anthony Lacques sings lead on this one) are delivered as almost spoken word or rap. If you’re a fan of Cake, you will likely love this song. And like many of the songs of I See Hawks In L.A., these lyrics mention Los Angeles locations and streets, such as Encino and the corner of Sunset and Doheny. I ended up absolutely loving this track. Seriously, it’s one of my favorites. “The system designed by geniuses/So idiots can watch TV and play with their penises.” Jimi Hawes plays bass on that track, as well as the following track, “That’s Not An Ice Cream Truck, That’s God,” which has one of the best song titles ever. By the way, on the back of the CD case, the words “That’s God” happen to end up printed over a hazy image of the sun. Nice! This song is another surprise, as it comes in gently but somewhat eerily, then suddenly reaches this kind of happy, bright plateau. Seriously, you will find yourself smiling uncontrollably when the song reaches that moment. At least, that’s how it happened with me, and I was only like three beers into my day. This is an instrumental tune.

The CD then concludes with its title track, “Right On Heliotrope!” The title might make you think of a guy exclaiming “Right on!” to a flower. And that’s fine. But also Heliotrope is a street in Los Angeles, and the photo on the back cover shows the street sign. This song mentions other L.A. streets, such as Spring, Flower and Sunset. This song also has a spoken word section, and a strange kind of beauty and ends with an a cappella section.

CD Track List
Right On Heliotrope! was released on November 23, 2013.
Posted by Michael Doherty at 3:55 PM