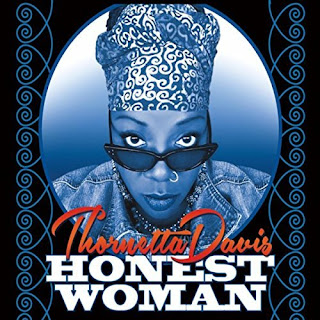 Thornetta Davis is a fantastic blues singer and songwriter based in Detroit. She’s been performing since the late 1980s, and released a couple of CDs in the 1990s, sang with both Bob Seger and Kid Rock (long before the latter voiced his support for Donald Trump), and won several Detroit music awards. Her new album, Honest Woman, features original material, all but the first track written or co-written by Thornetta Davis. This music is blues, but with a heavy dose of soul, as well as rock and funk. There are some seriously excellent songs on this disc.

The album opens with “When My Sister Sings The Blues,” a poem written and performed by Thornetta’s sister, Felicia Davis, backed by accents on electric guitar. “When my sister sings the blues/She sings with such sweet passion/Always feeling the rhythm/And never missing a beat.” It’s kind of a strange way to begin an album, essentially with someone else praising her. But soon enough you come to understand that Thornetta is deserving of such praise. The first song is “I Gotta Sang The Blues,” which is blues with a great, positive bent. This track features a guest appearance by Kim Wilson on both harmonica and vocals. You probably know him from his work with The Fabulous Thunderbirds, and his harmonica playing here is one of the things that make this track something special. And like I said, I love its unusually positive attitude, with lines like “The blues ain’t been nothing but good to me.” This song contains references to other blues tunes like “Wang Dang Doodle,” “Bright Lights, Big City” and “Big Boss Man,” and also mentions Big Mama Thornton, Koko Taylor and Etta James. It’s like a celebration of the blues.

That’s followed by one of my favorites, “That Don’t Appease Me,” a fun, rockin’ little blues number with Thornetta’s strong vocals taking charge, even as the shuffling beat gets your feet moving. “Well, when I met you I was lonely/I thought you were meant for me/But all you brought me was heartache/Pain and misery/Ain’t no way you’re gonna stay here/When you ain’t gonna treat me right/So pick up your bags and walk out the door/I don’t need no kiss good night/That don’t appease me.” This track features some nice backing vocals, which are actually also done by Thornetta. And there is some conversation near the end of the song, the end of a dubious relationship. Kenny Bynum provides the male perspective there.

One of this CD’s best tracks is “Am I Just A Shadow,” a beautiful, soulful and moving song featuring another excellent vocal performance by Thornetta Davis. Check out these lines: “I don’t know why you feel the need/To cut my heart and watch it bleed/Is that your way to make me pay for her deceptions.” And when she asks “Do you really know me,” I want to respond, “Yes!” For this kind of honesty and vulnerability makes us feel we do know her. Or, at the very least, it makes us want to know her. This song also features some nice work on guitar by Brett Lucas. Thornetta Davis follows that one with a fun track titled “I Need A Whole Lotta Lovin’ To Satisfy Me,” which has some delicious work on keys by Philip J. Hale. Plus, this track features a wonderful horn section: James O’Donnell on trumpet and John Paxton on trombone.

If forced to pick an absolute favorite track on this disc, it would probably be “I’d Rather Be Alone” (though “Am I Just A Shadow” is a close second). The moment it begins – that vibe, that beat, the horns, those gorgeous gospel backing vocals – I fall in love with this song. And that’s even before Thornette’s lead vocals come in. She delivers the first lines in kind of a playful spoken word style. Then when she’s ready to give it all to us, she starts singing, “I’d rather be alone than be lonely with you,” supported by those great backing vocalists (Roseann Matthews, Rosemere Matthews, and Thornetta herself). They’re there to agree with her, to back her up vocally, and I suspect physically too if it were to come to that, ready to attack the man that’s done her wrong. Not that Thornette can’t hold her own. After all, with everything that’s going right with this song, everything that’s delicious about this tune, it is her vocal performance that really drives it. By the way, this track features some great stuff on keys, and on guitar too. Thornetta returns to a spoken word style at the end. Dave McMurray is on sax, and John Douglas plays trumpet on this one.

I also love the backing vocals on the next song, “I Believe (Everything Gonna Be Alright).” Here she is joined by three members of the Detroit gospel group Special Anointing – Kennie Bynum, Carl Porter and Rodger Sims. They certainly add to the fun vibe of this song, which is an interesting mix of blues, gospel and country. “I Believe (Everything Gonna Be Alright)” was written by Thornetta Davis, Brett Lucas and Phillip J. Hale. “Get Up And Dance Away Your Blues” is a celebration, a party in itself, with a great big band vibe to the blues, and with Thornetta urging us to dance away our blues. Hell, that job is done just by playing this song, but yeah, I think this one will have folks dancing all the same. Listening to this song, I can see the whole country erupting into a spontaneous dance party. Play this in Washington, D.C., carry away those fiends on the wave of the crowd’s dancing, and then install someone with soul, with rhythm, to take this nation forward. Marcus Belgrave is on trumpet, Edward Gooch is on trombone, and Rayse Biggs is on trumpet. Paul Carey delivers some wonderful work on guitar.

“Can We Do It Again” has a nice, sexy groove, more cool work on horns and another excellent vocal performance by Thornetta Davis. “Can we do it again/It’ll be so nice/See, in this case ain’t nothing wrong/With doing the same thing twice/Can we do it again, baby/Just like before/See, the way you make love to me/You make me want you more, more, more, and more/And more.” That second “And more” makes me smile every time, the way she throws it in. The other line that makes me laugh is “The way you do what you do when you do what you’re doing, baby, tell me, was your daddy an acrobat.” And when she sings “I’m about to lose control,” you know that’s a damn good thing. And I dig that bass line by Chuck Bartels. “Can We Do It Again” was written by Thornetta Davis, Brett Lucas and Phillip J. Hale.

Another of this disc’s many highlights is its title track, “Honest Woman.” This song has a wonderful classic soul vibe, with horns. It just feels so good. “The day we met/Was like a dream come true/Every day since/This thing grew stronger between me and you/No, it wasn’t easy/With my insecurities/But I’m so glad it was you/Who saw this love inside of me.” The CD then concludes with “Feels Like Religion,” a tune designed to leave us on our feet. It’s kind of funky, with a great dance beat. I love the work on drums by Todd Glass and on bass by James Simonson. “The happiness I long for is really up to me.”

CD Track List
Honest Woman was released on September 23, 2016.
Posted by Michael Doherty at 2:48 AM