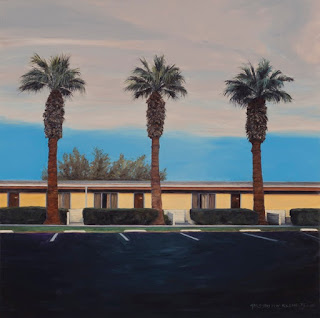 The three original core members of I See Hawks In L.A. – Rob Waller, Paul Lacques and Anthony Lacques – created another band, Stoney Spring, and released their first CD in 2013, Right On Heliotrope! A couple of years later they put out their second album, Don’t Let Me Die At Coco’s. As on the first album, they’re joined by Jimi Hawes on bass on certain tracks. And this time they’re also joined by Marc Doten (who has played on I See Hawks In L.A. albums, as well as on Rob Waller’s solo release, Fancy Free) on one track and by Carlos Alvidrez on trombone. As on the band’s first album, the songs on Don’t Let Me Die At Coco’s were all written or co-written by Anthony Lacques. And as on the first album, Anthony plays most of the instruments on this release – piano, guitar, drums, marimba and bass. Rob Waller is on lead vocals, and Paul Lacques plays lap steel.

This disc kicks off with “Swimming Class,” a groovy, fun tune. Hey, am I mad, or does that rhythm at the beginning remind you a bit of “Aquarela Do Brazil,” like a slightly slowed down version of that heard in Terry Gilliam’s film? The vocals are delivered quietly during this section, as if spoken among themselves, and we’re overhearing it. “Let’s go to the swimming hole, go to the swimming hole, they can’t mess with us now.” Then it suddenly kicks in, “You electrify my mind/And I electrify your mind.” And all right! There is a humor to the delivery of lines like, “Celebrate the sun/People having fun/It won’t last very long/So get it on, get it on in the sun.” Nothing lasts all that long, although it does seem like Donald Trump has been president for thirteen years, but I’ll try to keep that oaf out of my thoughts for a while and just enjoy this music.

“A Nation’s Cry” is one of my personal favorites. There is something so bloody delightful about this one, like a loose, crazy dance-march toward oblivion. “I’m getting too old to be desperate/I’m getting too desperate to be old.” Jimi Hawes plays bass on this track. And then Marc Doten sings lead and plays bass on “Don’t Let Me Die At Coco’s,” the CD’s title track, which he co-wrote with Anthony Lacques. By the way, in addition to his work on CDs by I See Hawks In L.A., you probably know Marc Doten as a member of Double Naught Spy Car. This is another quirky song with some playful lyrics, which I appreciate. “One moment of truth makes up for a whole day of dishonesty/Making peace with blood/Licking your wounds with grace.” There is a lot going on here, lots of stuff to grab your attention, get your brain working. Anthony Lacques takes lead vocal duties on the following track, “Seed Passer.” “Save up for your heart attack/Wait for your heart attack/Here it comes.” This music is certainly its own, singular entity; however, I think fans of Frank Zappa and Cake (yeah, I know those two are quite different from each other) will seriously dig this album.

“Soul Song For Deaf Boy” is another of my favorites. It has a kind of mellow, unusual folk-rock vibe and features some wonderful work on piano. I love Rob Waller’s vocal work here. “No one cares about your story/You’ve got to make your own glory.” Jimi Hawes plays bass on this track. That’s followed by “Come, Gods,” an odd, trippy instrumental tune, sounding at times like New Orleans fracturing and going off in various directions while each bit remains interested in what the other bits are doing, checking in, you know, keeping it together while moving apart. Your body might have trouble dancing to this one, but your mind will be twisting and twirling away.

“Shameless Hippie Sex Party” has a quiet folk feel at the start, and some really good, playful lyrics. Take these lines, for example, which open the song: “It’s like seeing a sign/For a sign maker/Or looking for your glasses/So you can find your glasses.” And I love that after the line, “Or maybe he’s an artist who never signed his name,” he adds, “Yeah, that’s it,” happy or even proud that he found the right expression for what he’s trying to get across. The song soon kicks in to become a fast-paced number with lines that are certainly relevant. “But put him in the desert without his little phone and he’s a god-forsaken cripple.”

In “A New Way,” the line “Happy is a loaded gun” calls to mind “Happiness Is A Warm Gun.” That’s followed by “Mendocino,” a wonderful and surprising instrumental featuring marimba and trombone. Then “Ride That Wild Ass To Hell” comes on strong, sounding like an unhinged ex-minister at a roadside bar, certain he sees demons in every pair of eyes around him. “Everyone wants something/But someone wants everything/And it takes a worried man/To execute that big mother’s plan.” The album then concludes with “I Wanna Bruise Ya (With The Stain Of Babylon),” which opens with a little tease of that “Brazil” rhythm that began the opening track, but faster this time. Anthony sings lead on this track. This one mentions Steely Dan, a band I’ve never cared for (I don’t ever want to hear “Reelin’ In The Years” again), but whose name I appreciate, coming as it does from a William S. Burroughs book.

CD Track List
Don’t Let Me Die At Coco’s was released in October, 2015.
Posted by Michael Doherty at 5:17 PM