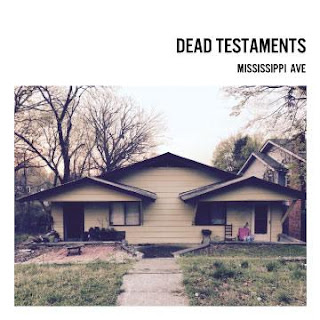 Dead Testaments is a band based in Chattanooga, Tennessee, consisting of Isaac “Abe” Houck on guitar and vocals, Matt Livingston on drums, and Allie Stafford on violin and keys. They’ve been playing together since 2013, and in 2014 released their first CD, an EP titled 231 MLK. Now they’re following it up with another EP, Mississippi Ave. Why the three-year gap between CDs? Well, Matt had a brain tumor in 2015, and that required a couple of operations and a recovery period. But now that he’s back to health, the band is ready to continue, and this new CD contains four original songs. The sound of this album is mainly a kind of haunting folk rock, music that will draw you in and make you pay attention.

The EP opens with “Under The Sun,” a song that approaches you like some strange craft in a night when maybe you’ve had a bit too much to drink, or not quite enough – but regardless, you’re ready for whatever comes, be it answers or oblivion – for whatever it is, it promises to be interesting and different. Soon the song takes on a cool, dark groove, and the lyrics are offered quietly, simply, without unnecessary effort to reach us, for we’re already there: “We lit out for the west/Came back to the place where we began/Under the sun, under the sun.” And then that guitar part is just perfect. In the second half of the song, you find yourself drifting through the tunnel of a kaleidoscope where the colors are all deep shades of blue and purple and red. And voices remind you, over and over, “What has been will be again,” until past and future become meaningless, and you trust the groove, the voice, implicitly to carry you through.

“Under The Sun” is followed by “Ghosts Of The Civil War Trees,” which was the first single released from the EP, and was the song that got me interested in the band. It has a happier folk sound, a more positive feel right from the beginning, with light, playful touches, as if to reach out to the child in us all. Like a waltz from some collective past that we all dreamed one warm afternoon and then forgot.  And here suddenly it is again, beautiful and unnerving. “They are still swaying/Swinging low/Deep roots/Gorged on young blood/Full of seeds/Opening.” This is a wonderful song.

“Washed Up” is an interesting mix of folk and a kind of moody rock, with that electric guitar giving the song a kind of 1960s rock thing, at one point sounding almost like surf guitar. “There’s gold in those hills/I would take my bones and lay them in holes.” The EP then concludes with “Good Union Man,” which quickly creates a dark mood and atmosphere with its slow, nearly hypnotic groove.

CD Track List
Mississippi Ave. is scheduled to be released on April 30, 2017.
Posted by Michael Doherty at 5:54 PM