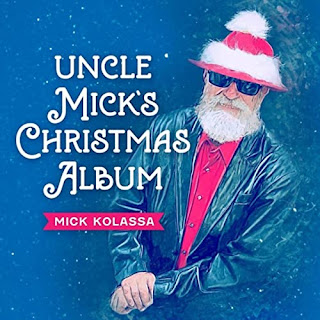 Sure, the holiday is over and it’s time to take down the decorations. But why not listen to a good holiday blues album while you pull down the tinsel and box up the bulbs? Mick Kolassa has just the thing, Uncle Mick’s Christmas Album, featuring a mix of covers and original material, all with a great Memphis sound. Joining the vocalist and guitarist on this release are Jeff Jensen on guitar, Bill Ruffino on bass, Rick Steff on keyboards, James Cunningham on drums, Eric Hughes on harmonica, and Marc Franklin on trumpet, with Reba Russell and Susan Marshall on backing vocals. The arrangements are by Mick Kolassa and Jeff Jensen.

This album opens with a delicious bluesy rendition of “All I Want For Christmas Is You.” Yes, the Mariah Carey song. But this version has a very different feel from what you’re used to, and, as far as I am concerned, is much better than the original. It features some nice work on guitar and some lovely backing vocals. This is how the song should have been presented all along. It feels natural and just exactly right. “All I want for Christmas is you, baby.” Then we get a groovy rendition of “Frosty The Snowman,” with a cool bass line, a cheerful vocal performance, and some great touches on harmonica and trumpet. It is like Frosty journeyed on down to New Orleans and started swinging in the French Quarter. You can imagine Frosty leading a second line down the street, and that is one hell of a magical snowman indeed!

The first of the album’s original numbers, “The Best Christmas Ever,” has a bit of funk to its groove. This is an optimistic song, as he sings “This is going to be the best Christmas ever,” and the backing vocalists echo the sentiment. This track is kind of catchy and fun. “You know, I’m never, never ever gonna take down that Christmas tree,” he sings in this one. And if you still have yours up, well, this is the song for you. By the way, he follows that line by saying “‘Cause I got my angel living right here with me.” Ah, so smooth. This one features some totally delightful work on backing vocals, as well as a great lead on keys. That’s followed by one of my personal favorite holiday songs, “Merry Christmas Baby,” this version featuring some excellent blues guitar, setting the mood immediately. “I’m feeling mighty fine/Got good music on the radio.” Oh yes, that will do it for me every time. This is a superb rendition, definitely a highlight of this disc.

Mick Kolassa delivers an interesting take on “Jingle Bells.” “Jingle Bells” is not one of my favorite holiday songs, but Mick Kolassa does something different and original with it, giving it a good blues vibe. Sure, the lyrics are still weak, but he makes something good out of this song. He puts sunglasses on those on the sleigh, and even on the horse pulling it. And that horse is in no hurry, just grooving his way over the fields and through the town. That’s followed by a fun, joyful rendition of “Winter Wonderland,” featuring a wonderful vocal performance. “Parson Brown” becomes “Reverend Brown” in this version. Then we get a good, bluesy version of “Have Yourself A Merry Little Christmas,” featuring some great stuff on trumpet. Especially as it’s a blues version, I’m a little disappointed that he went with the “Hang a shining star upon the highest bough” line instead of the much better and more appropriate “Until then we’ll have to muddle through somehow.” Still, it’s a really good, passionate rendition.

“Christmas Morning Blues” is an original tune written by Mick Kolassa, a rocking blues number. It begins with a variation of that traditional blues opening line “Well, I woke up this morning,” with Mick singing, “Well, I woke up Christmas morning,” showing a sense of humor. That sets the tone. This is a Christmas when things have gone wrong, as he tells us: “First thing Christmas morning I see that you are gone/You didn’t leave no letter, didn’t tell me what I’d done/I bought you all these presents, put ‘em underneath the tree/I spent my money on your presents, laid ‘em down underneath the tree/Looks like you took ‘em with you, but you didn’t leave none for me.” The album then concludes with another original tune, “Beale Street Christmas Jam,” this one written by Jeff Jensen and Mick Kolassa. It should come as no surprise that this delicious instrumental number features some excellent work on guitar, but everyone gets a chance to shine, to groove on this track. There is even a brief drum solo. It’s a fun way to wrap things up, with little nods to other holiday songs.

Posted by Michael Doherty at 11:21 AM