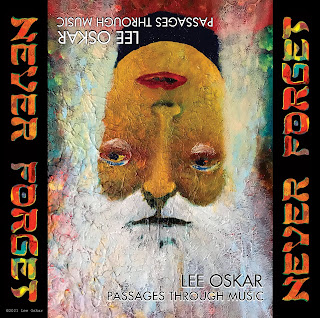 As another crazy year comes to a close, and we wonder what the near future holds, it is a good idea to take stock, both in our own lives and in the larger reality we find ourselves in, and to look to the past for lessons about the present. The Holocaust has been brought up a lot lately, sometimes in completely inappropriate ways, such as when lunatic Marjorie Taylor Greene repeatedly compared wearing masks to Jews being forced to wear yellow stars in Nazi Germany. People seem to be forgetting what exactly happened and what it all means, which is terrifying, because it makes it all the more likely that it could happen again. And these days when the Republican Party has basically become the Fascist Party in all but name, it is particularly important to remember what fascism has led to, and what it can lead to. Lee Oskar takes on the somber and important task of reminding folks through music with his new album, Never Forget. It is a personal undertaking as well, for Lee Oskar’s own mother and aunt are survivors, having escaped from the death march out of the Stutthof concentration camp in Poland. Lee Oskar’s grandmother perished at that camp. The liner notes to the album include several photos of his family, as well as some of Lee Oskar’s artwork touching upon the themes of the music. The music here is all original compositions, written or co-written by Lee Oskar, who is known for his work in the group War, of which he was a founding member. Considering the subject matter and inspiration for this recording, the music is surprisingly uplifting and warm. The tracks are mostly instrumentals, the music conveying a feeling of hope, a strong feeling of humanity, which is just what we need as we begin the new year.

The album opens with “Far Away Dreams,” which has an uplifting, optimistic sound from its start, and of course features some excellent work by Lee Oskar on harmonica. There is also some good work by Brian Monroney on both piano and guitar. This piece seems to urge us to not give up our dreams, to move forward, and to do so with love and compassion and joy. I love the way it builds. This track features some background vocal work by Annie Jantzer and Nick Foster, adding to its emotional power. That’s followed by “Miracle Children,” which immediately has a more somber feel, featuring gorgeous work on violin and cello. It seems to come from a place of darkness, but heading to that of light. You get the strong sense of history in this track, like voices rising from the past, reaching out, Lee Oskar’s harmonica providing a particularly potent voice. There is a sense of both the fleeting aspect of an individual life, and the larger continuing march of humanity, and the way the two are connected. Phillip Peterson is on cello, and Victoria Parker plays both viola and violin.

And speaking of the personal aspect of this album, we then get a piece titled “Song From Mom.” It is interesting that it is titled “Song From Mom” rather than “Song For Mom,” showing it is more inspiration than dedication. This is another beautiful and moving track, with a certain strength behind it. It features more wonderful work from the string section, though the main voice is the harmonica. It feels like that instrument is telling us a story, taking us to a different time, his playing is so beautiful and effective. Brian Monroney plays mandolin on this track. That’s followed by “Last Moments (Saying Goodbye),” a gentle and loving and uplifting piece written by Lee Oskar and Mark Ross. It also features the string section, as well as some nice work by Brian Monroney on guitar. “Never Forget,” the album’s title track, has, understandably, a serious sound and mood. It is shocking that there are people who deny the Holocaust happened, and as we are losing the last survivors and eye witnesses from that time, we can’t help but think that deniers will grow in number. We must do whatever we can to combat those voices with truth. Will that be enough? We live in a frightening time, with the memory of fascists marching in Charlottesville chanting “Jew will not replace us” still fresh. This track, as you might imagine, is incredibly moving, with beautiful work on harmonica, piano and strings.

I wonder if people coming to this country now still feel the same sense of optimism and hope that immigrants did decades ago. “Liberty (An American Waltz)” certainly reminds us of what is best about this country, about what this country could and should be. There is a great joy to this piece, as well as pride and optimism. Cesar Armarel plays trumpet on this track, Darian Asplund plays saxophone, and Jerome Smith is on both tuba and trombone. That’s followed by “World For Peace (Tolerance),” which has a more solemn sound, but is still hopeful. Music like this makes us feel that peace and understanding are achievable. But reading the news, I am not as optimistic. People seem to want to fight, to denigrate each other, to look down on other groups. Perhaps if we could play this music for those people, things would improve. This track features Amiram Granot on clarinet, and some excellent work by Eric Jaeger on flamenco guitar. This one also features some moving vocal work by Chava Mirel, Rami Yitzhak and Annie Jantzer.

As “Song For Sri” begins, it is a wonderful duet with harmonica and guitar. That’s Tim Lerch on guitar. The strings and bass then add their voices, and the piece begins to grow. Dean Schmidt plays bass on this track and throughout the album. This is a tune of passion and compassion, of understanding. The album then concludes with “My Road,” a different version of which was included on his 1981 album My Road Our Road. As Lee Oskar’s harmonica calls out to us near the beginning, this song has a distinctly personal and individual vibe. Then as the strings join, it feels like people coming together, perhaps to lend a hand, perhaps to lend an ear, or just to remind us we are not alone as we make our way through this life, as we struggle, as we stumble, as we get back to our feet. This track is beautiful and encouraging, a reminder that the world is not a bad place, that there are good folks out there.

Never Forget is scheduled to be released on January 28, 2022, the day after International Holocaust Remembrance Day.

Posted by Michael Doherty at 1:43 PM