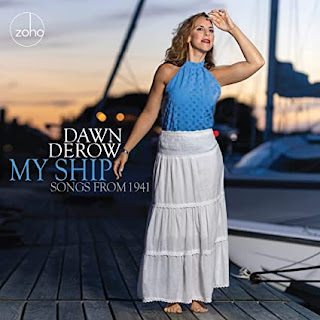 In 1941, the United States entered World War II. Most of the people who fought in that war are now gone, as are the folks who created the music to help the country through that mad time. But vocalist Dawn Derow takes us to that year with her new album My Ship: Songs From 1941, her voice carrying all the hopes and sorrows and joys and fears of the time. She has chosen some of that year’s best material to create for us a strong sense of what it must have felt like to be alive then. Joining her on this release are Ian Herman on piano; Tom Hubbard on bass; Daniel Glass on drums and percussion; Robin Zeh on violin; Joyce Hammann on violin; Paul “Dale” Woodiel on violin; Katarzyna Bryla on viola; Deborah Assael on cello; Sean Harkness on guitar; Benny Benack III on trumpet and cornet; Aaron Heick on saxophone, flute and clarinet; and Dan Levine on trombone.

Dawn Derow opens the album with a beautiful rendition of “Lover Man (Oh, Where Can You Be?).” The song’s opening line is “I’ve heard it said that the thrill of romance can be like a heavenly dream,” and that’s how this song sounds. She delivers an impressive vocal performance, like she is living and breathing that time. Her voice has all the longing and passion you could ask for. Listen to the powerful and sexy way she delivers the lines “Someday we’ll meet and you’ll dry all my tears/Then whisper sweet little things in my ear/Hugging and a-kissing/Oh, what I’ve been missing.” This track also features some great stuff on saxophone. This song was written by Jimmy Davis, Roger Ramirez and James Sherman. That’s followed by the first of three medleys contained on this disc, “Let’s Get Away From It All” paired with “How About You.” “Let’s Get Away From It All” sounds as appealing now as it must have at that time, for once again there is so much to get away from. “Let’s take a trip in a trailer/No need to come back at all.” And she makes it sound romantic and wonderful. She transitions smoothly into “How About You,” written by Burton Lane and Ralph Freed. When I hear this song, I tend to think about Robin Williams in The Fisher King, but it was introduced in another film, Babes On Broadway, where it was sung by Judy Garland and Mickey Rooney. Here Dawn Derow sings “Gary Cooper’s looks” rather than “Franklin Roosevelt’s looks.” There is a great joy in her performance here, especially as she returns to “Let’s Get Away From It All.” She then changes gears with a pretty and moving version of “Skylark,” featuring the string section.

Things then start swinging with the album’s second medley, which begins with a lively rendition of “Boogie Woogie Bugle Boy,” moving quickly into “Don’t Sit Under The Apple Tree,” the energy remaining high. She then goes into “Hut Sut Song,” touching upon all three songs within the track’s first minute. This track is a lot of fun. She spends the most time with “Hut Sut Song,” a goofy and spirited song, only returning to the other two in the track’s final moments. Dawn Derow then turns romantic with “Why Don’t We Do This More Often?” She sounds absolutely adorable and sexy. “We make each other laugh, we make each other sing/And you can never ever overdo a good thing/So why don’t we do this more often/Just what we’re doing tonight.” Everything about this track is perfect, and it’s perfect for our times, when we need to laugh and sing. She is totally into this track, turning in an excellent performance. That’s followed by “Chattanooga Choo Choo.” The way she opens this one is cute and charming, saying “Pardon me” and giving a little laugh. “Pardon me, boy/Pardon me, boy/Is that the Chattanooga Choo Choo?” This is another lively number. “Excuse me, but does this choo choo have a bar car?” she asks in the middle. Ah, good question.

The last medley is in a more romantic vein, beginning with “Just Squeeze Me (But Please Don’t Tease Me),” its first lines being “Treat me sweet and gentle/When you say good night.” This track features a beautiful and moving vocal performance. “Please say you love me too.” And you can hear the smile in her voice as she sings “When I get this feeling, I am in ecstasy.” This track also contains some sweet work on piano. Approximately halfway through, she moves into another Duke Ellington number, “I Got It Bad (And That Ain’t Good).”  She then gets into a sexy blues area with “Blues In The Night,” another of the disc’s highlights. In addition to her tremendous vocal performance, this track features some excellent work on piano and guitar. She follows that with “Baby Mine,” a pretty lullaby from the movie Dumbo. Her version has a magical, dreamlike feel.

“Saga Of Jenny” comes from Lady In The Dark. It was written by Kurt Weill and Ira Gershwin. I love that moment it kicks in, and the lyrics that follow are related to the holiday season, which now is upon us: “Jenny made her mind up when she was three/That she herself was going to trim the Christmas tree/Christmas eve she lit the candles, tossed the taper away/Little Jenny was an orphan on Christmas day.” This is a totally fun number, and Dawn Derow is clearly having a great time with it. “Jenny made her mind up at 22/To get herself a husband was the thing to do/So she got herself all dolled up in her satins and furs/And she got herself a husband, but he wasn’t hers.” That’s followed by another song from Lady In The Dark, “My Ship,” the album’s title track. She begins this one a cappella: “My ship has sails that are made of silk/The decks are trimmed with gold.” Dawn Derow delivers another beautiful performance on “At Last,” which begins in a mellow place, then bursts into a livelier realm. This rendition should have you smiling before long. Then we get Irving Berlin’s “White Christmas.” Dawn Derow’s rendition includes the introduction, and has a wonderful warmth. The album concludes with a moving rendition of “(There’ll Be Bluebirds Over) The White Cliffs Of Dover,” one of the most popular songs from World War II, a song that looks forward to a better tomorrow. “There’ll be love and laughter/And peace ever after/Tomorrow when the world is free.” Ah, well, maybe that didn’t pan out, but it’s still a gorgeous song, and Dawn Derow does an excellent job with it.