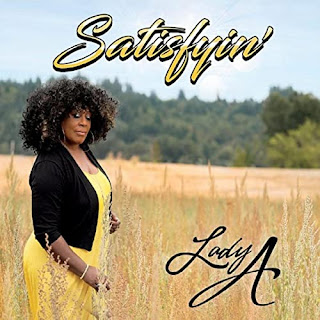 Lady A is known primarily as a blues performer, and it is mostly the blues that she delivers on her excellent new album, the aptly titled Satisfyin’.  This album features all original material, most of it composed by Lady A (whose real name is Anita White) and John Oliver III. John Oliver III also plays the majority of instruments on this album, though he and Lady A get some help from special guests on various tracks. Though it is blues, that doesn’t mean there aren’t elements of soul and funk, musical realms that Lady A is equally at home in, equally adept at delivering.

The album opens with “Whatever You Do,” a delicious blues number about seizing the moment and doing your best to make your life wonderful. Lady A encourages us to “Find a way to keep your passion strong.” This is such a wonderfully positive number. What a great example she provides here, particularly as she has reason to be angry and bitter. If you’ve been following music news the past couple of years, you are probably aware of that awful country pop band Lady Antebellum’s attempts to prove it isn’t racist by stealing a black woman’s name and then suing her. Crazy, right? Enough about them for now. This song will likely raise your spirits, and get you singing. “And if you’ve got to shout, don’t just make noise/Look, help others as you use your voice.” This song was written by John Oliver III, who plays bass, drums and keyboards on this track. Herman Brown is on guitar, and Paul Richardson is on organ. That’s followed by the album’s title track, “Satisfyin’,” which has a similar message. Its opening lines, which are delivered in a spoken word style, are “Look here, in this life, you only have one life to live/You ought to live it to the fullest/So whatever you do, make sure it’s satisfying.” This one has a funky edge. But it is still blues, with Lady A singing about how life is hard, a blues topic to be sure. “Nothing in your life ever turns out right/You work so hard to make a living/You forget to have a life/Life is hard, and one day you’ll die/And when you die, no one may cry.” But again, she takes that topic, and uses it to remind us to make the most of our lives. There is a playful aspect to this song as well, like when she says they’re going to give us a satisfyin’ solo. And we get some really nice work on guitar. By the way, Herman Brown plays guitar on this track, and John Studamire is on bass. Roz Royster-McCommon provides some nice backing vocals. This song was also written by John Oliver III.

As “Miss Beula Mae’s” opens, it sounds like a live track, like we are brought to the after-hours place sung about in the song. This is a fun number that describes a woman and the place she runs. This one was written by Lady A and Paul Richardson. Paul Richardson plays bass, guitar, drums, organ and clavinet. John Oliver III is also on drums, and provides the horn work. Here is a taste of the lyrics: “Miss Beula Mae wore a size 22/Got four or five men that just don’t know what to do/Look, her wig might be crooked, but she takes care of business.” We can hear the sound of the crowd at the end of the track as well. That’s followed by “Big Momma,” another fun number, this one about being a beautiful, larger woman. It features a cool, funky bass line by John Studamire, some wonderful backing vocal work by Roz Royster-McCommon, and a playful spoken word section in the second half. This one was written by Lady A and John Oliver III.

“Blues On My Mind” is a song about living in blues music, writing and singing the blues. This song acknowledges the impact and influence of some of the other blues greats that have come before, including Nina Simone, Denise LaSalle, and Bettye LaVette. And I seriously dig that instrumental section where the bass leads us down a funky, delicious path. Joe Seamons adds some wonderful stuff on harmonica. This one was written by Lady A and John Oliver III. Then in “Blues, Soul, Catfish & Fried Wings” she paints a picture of another lively place, taking us there with her voice. Lady A is so good at setting a scene, and making us feel like we are present. She also mentions some of the blues and soul performers that paved the way in this song, folks like and Johnnie Taylor and Sam Cooke. That’s followed by “Brighter Day,” a powerful, yet totally enjoyable and positive number about a better day coming. “I don’t want to tell no lies/We’re in the middle of a storm/Fighting for our very lives/The future of our babies.” This song also contains a playful response to Timbuk 3’s “The Future’s So Bright, I Gotta Wear Shades”: “Taking my shades off because the future’s bright.” This track also features good use of backing vocals, which are provided by John Oliver III, who also plays all the instruments on this track. This song was written by John Oliver III and Mitia Oliver.

“Enjoy Your Life” is a mellower, smoother number with a bit of a 1970s vibe, and carrying that positive message, apparent from the song’s very title. This one, written by Lady A and John Oliver III, creates a pleasant scene of home, of family. “Here we are, lord, together again/Taking a break from the regular noise.” That idea is of course incredibly appealing, particularly these days. That’s followed by “For The People In The Back (All I Got),” a different version of which was previously released as a single under the title “My Name Is All I Got.” After some soulful humming at the beginning, the solid beat comes in, and Lady A repeats “They tried to take my name, but my name is all I got.” I don’t think there is any question about what this particular song is about, nor at whom it is aimed. Lady A delivers an understandably passionate vocal performance. “I’ve come too far to turn around/I can’t, I won’t stop now/They keep on trying/To make me insane.” I love this song. And in a spoken word section she thanks Margo Price for saying that Lady A should be invited to perform at the Grand Ole Opry (that dreadful country pop band that stole her name played there). She then says definitively, “So I’m going to keep this name.”

This album concludes with “Heaven Help Us All,” a beautiful, soulful number that reaches out to everyone who is struggling, everyone who is in pain, everyone who is confused. It features a moving vocal performance. “I turn on my TV/So much to see/And most of it’s bad news/The noise and the hatred, the nonsense desensitize me/Can I change my view/This rage inside/Lord, it makes, makes my head hurt sometimes.” The entire nation needs help, which this song recognizes. It was written by Lady A and Roz Royster-McCommon.

Posted by Michael Doherty at 12:47 PM