As this ridiculous year comes to a close, and coronavirus cases are once again on the rise, we can hope next year will be better and that people will at least try to go back to resembling humans capable of sympathy and intelligent decisions. I’d like to say I’m optimistic. One area we can count on is music. I am thankful for all the great albums released this year, and know we have more excellent releases to look forward to in the coming months. Here are some notes on a few new jazz albums you might want to check out. 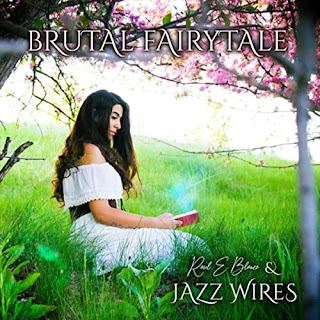 Raul E. Blanco & Jazz Wires: “Brutal Fairytale” – In the liner notes to the new Jazz Wires album, pianist and composer Raul E. Blanco urges us, “Write your own story.” Good advice, of course, but also kind of funny for an album titled Brutal Fairytale. The album opens with its title track, which features some wonderful vocal work by Gabriella Aragon, at times wistful, at times playful, as she delivers the song’s tale. “The more I try, I can’t escape/This brutal fairytale.” The music itself, like a story, has hills and valleys, exciting moments and softer passages. The band is made up of Raul E. Blanco on piano, vocals and percussion; Brandt Fisher on tenor saxophone; Noah Austin on trumpet; Gabriella Aragon on trombone and vocals; Joseph Ballestrasse on bass; and Anthony Channita on drums. “Brutal Fairytale” is followed by “Spanish Tale In Arabia,” and this one too weaves a compelling story, though this time without vocals. There is a beautiful section approximately a minute in, led by some great work on piano. Things then turn lively and fun from there. What an excellent ride! There is an excitement to their playing in “Digital Memory” as well, a track which moves and pops and flows with a life of its own. “Origins” is another highlight, in part because of the work on percussion, in part because of its bright, pleasant vibe. And just before the end, there is some nice vocal work, which adds to that overall vibe. “Lo-Fi Banger” features some fantastic work on piano, as well as some great stuff from the horn section, though the static mimicking an old record quickly loses its appeal. That’s followed by “Traces Of You,” a pretty and moving song, with Raul E. Blanco on vocals. Then “Ska-Monk,” the album’s closing track, opens with some playful vocal work, and soon becomes a fun number that even includes a short drum solo. This album was released on November 19, 2021. 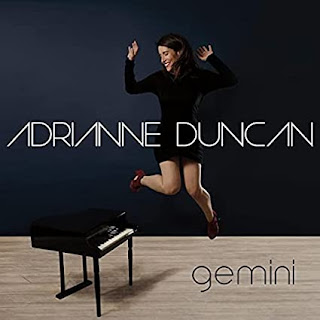 Adrianne Duncan: “Gemini” – Adrianne Duncan is a singer, pianist and composer, and her new album, Gemini, features mostly original material. The disc opens with “He’s Not Quite You,” a pretty, late-night gem about a woman who is in a relationship but is thinking of another. “It’s not quite right/It’s lovely and stable/But it isn’t quite right/I never used to want to turn out the light/Or be polite.” Of course you feel for her in this song, especially as her longing is nearly palpable, but you can’t help but feel for the poor guy she’s dating too, who is likely unaware that she doesn’t love him. In the second half, the song changes gears and features some wonderful work by Nick Mancini on vibraphone. By the way, the other musicians backing her on this release include Dan Lutz on bass, Jimmy Branly on drums, Katisse Buckingham on flute and saxophone, and John Tegmeyer on clarinet. “He’s Not Quite You” is followed by “Elijah,” which also has a late-night feel, beginning with some solo work on piano. She then establishes a sense of place in the song’s first lines, “A cold dark road/On a winter night/The tree bark shimmers/In the sharp moonlight.” It is not until two minutes into the track that the other musicians come in, and the tone changes at that moment, from somewhat haunting to passionate and rather sexy. This track also features an excellent instrumental section with some powerful work on saxophone. The album’s title track, “Gemini,” is the only instrumental on this album. It’s a lively number with a good groove, and features a great interaction between flute and clarinet. “Home At Last” has a dark, lonesome sound as it begins on piano. When the other musicians come in, some of that is dispelled, but the song maintains a rather melancholy vibe. This track also features a fantastic vocal performance, probably the album’s best. “She sits alone upon a throne of deep and bitter red/The cabernet reminds her that the life she knew is dead.” The album concludes with its only cover, an interesting rendition of The Police’s “Roxanne” that begins with vibraphone and takes off from there. This album was released on September 24, 2021. 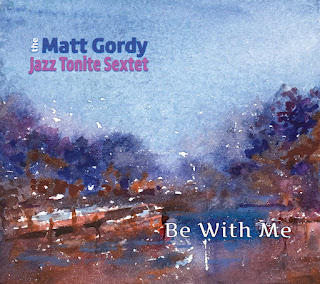 The Matt Gordy Jazz Tonite Sextet: “Be With Me” – Matt Gordy is a talented and respected drummer who has played with many artists during his career. Be With Me is his second album as band leader, and features not only his playing but also his talent as a composer, with four original compositions. The album opens, however, with a delicious rendition of “Topsy,” written by Eddie Durham. This arrangement offers plenty of opportunities for Matt Gordy to shine on drums, but also features some excellent work by Alan Pasqua on piano, Ron Stout on trumpet, Jeff Ellwood on saxophone, and Ido Meshulam on trombone, with Chris Colangelo keeping everything moving just right on bass. Then Colangelo starts “You And The Night And The Music” with a good solo, setting the track on its way and again giving it that great movement. Then we get into the original material, beginning with “Camouflage,” which has an easygoing vibe at first, the horns working together, with a touch of funk to its rhythm, enough to make your body start swaying before you even notice it. But it is Alan Pasqua’s work on piano that I especially latch onto here. That’s followed by “Spring Ahead,” a sprightly number whose rhythm had me smiling within its first few seconds. “Chloe” is a gentler, sweeter tune, one he wrote for granddaughter. The album’s title track, “Be With Me,” which was written by Matt Gordy and Gregg Arthur, features Sherry Williams on vocals. She delivers a soothing, beautiful, dreamlike vocal performance. “I lay, thinking of every word you’ve whispered.” This track also features some pretty work on piano. It is the last of the album’s original compositions, and is one of only two tracks to feature vocals. The other is a cover of “Sunny,” with Sherry Williams once again delivering a really good, soulful performance. This album is scheduled to be released on January 28, 2022. 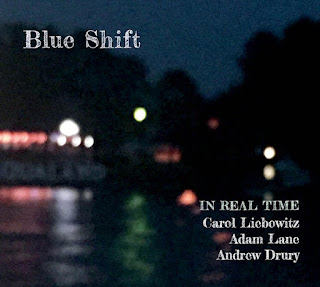 In Real Time: “Blue Shift” – In Real Time is the trio of pianist Carol Leibowitz, bassist Adam Lane, and drummer Andrew Drury. Their debut album, Blue Shift, contains completely improvised pieces. They went into the studio without any preconceived material. Something like that could result in disaster or gold. Fortunately, these are talented musicians, and this approach clearly suits them. The opening track, “Crosstown,” has a sense of excitement about it, of movement and of possibilities. Those rare nights when you go out ready for anything, eager to embrace whatever the world can toss your way? That’s what this feels like. And it does get a little crazy, even a bit dark at one point. Then “Curve” right away takes us to a less familiar place, Adam Lane leading the way, this track giving us a different look at the world, a slightly twisted reality. Somehow it gets even more interesting when it turns gentle halfway through, with an inquisitive sense about it. And while that leads to some chaotic moments, it is a chaos we recognize, a chaos we feel in touch with. “Blue Shift,” the title track, eases in with some nice work on bass, pulling us somewhat tentatively through a portal into its own distinctive night. “Sequoia Moon” creates a somewhat playful atmosphere, like running through streaks of light in an otherwise dark landscape. And it soon develops into a good jam. “Passacaglia,” the closing track, has a great energy even from its opening moments, and you get the sense of a lot going on, with mostly willing participants. But who can tell for sure in this rush for more, in this drive for sensation? Nearly halfway through, there is an unexpected pause, and the bass then leads us into a different space. This album is scheduled to be released on March 4, 2022. 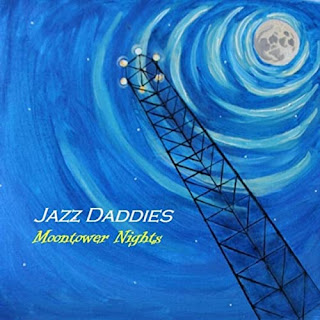 Jazz Daddies: “Moontower Nights” – Jazz Daddies are based in the Austin area, and are led by guitarist Randy Larkin, who composed all the material for Moontower Nights. The band is also made up of Gary Feist on bass, Kenny Felton on percussion, Andrew Malay on saxophone, Marty Mitchell on bass, and Shane Pitsch on trumpet and flugelhorn. The album gets off to a good start with “Voyage To Nepal,” a track that has a delicious groove. It is the saxophone lead that takes us away from our normal surroundings and gives us the sense of existing in a more exciting place. That’s followed by the album’s title track, “Moontower Nights,” a totally catchy and swinging number. This one too is able to transport us, but in this case to another time. It features a wonderful lead on guitar. Then there is a certain joy to “Blues On The Green,” particularly Randy Larkin’s work on guitar. That’s followed by another fun track, “Hot Dog,” in which the band at one point calls out the name of the song, making this the only of the album’s tracks to feature vocals. I love that lively work on trumpet. And “Rainy Paradise” has such a cheerful vibe that you can’t help but let it overtake you. “Bossa Verde” features yet another excellent lead on guitar. The album concludes with “Rico,” another enjoyable number with a delightful groove. Again, there is a lot of joy to this music, and we can all certainly use that these days. This album was released on September 6, 2021.
Posted by Michael Doherty at 10:20 PM