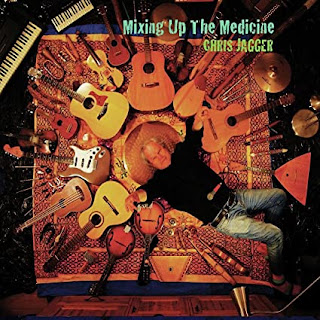 When I first looked at the title of Chris Jagger’s new album, Mixing Up The Medicine, I thought of course of the opening line from Bob Dylan’s “Subterranean Homesick Blues,” “Johnny’s in the basement, mixing up the medicine.” As in, he’s making some sort of concoction. But then later when I looked at it again, and maybe because I’m getting older, I thought about someone confusing two different medicines, mixing them up, with possibly tragic results for whoever should take the wrong thing. Maybe that’s just where my head’s at these days, because the music on this disc is a delightful mixture to cure whatever ails you. Chris Jagger released his first album in 1973, and followed it with several others over the years, (though his focus hasn’t always been on a music career, and he talks about some of his other adventures in his new book, Talking To Myself). This new album features all original material, written by Chris Jagger and Charlie Hart. Charlie Hart also plays bass, piano, accordion and violin on these tracks. Chris Jagger is on vocals, guitar and harmonica. Joining him on various tracks are (in addition to Charlie Hart) Dylan Howe on drums; Neil Hubbard on guitar; Jody Linscott on percussion; Nick Payn on saxophone; Frank Meade on saxophone and harmonica; John Porter on organ, guitar and mandolin; John Etheridge on guitar; Olly Blanchflower on bass; Les Morgan on drums; Elliet Mackrell on viola and violin; and Scarlet Hart on backing vocals.

The album opens with “Anyone Seen My Heart?,” a fun tune with a classic sound, created immediately in part by the presence of saxophones. Both Frank Meade and Nick Payn play sax on this track. In addition to the horns, this track features some good work on guitar. And there is a familiar voice joining Chris as well, that of his older brother Mick Jagger. This song has some older origins than might at first be apparent. Chris Jagger and songwriting partner Charlie Hart share writing credits with Thomas Beddoes, an English poet from the 1800s. There are some unusual lyrics, such as these: “In heaven there’s no purchaser/For such strange ends and odds/Says a Jew who goes to Jupiter/To buy and sell old gods.” Apparently the lyrics come from Beddoes’ poem “The Runaway.”  By the way, there is a music video for this song, and brothers Chris and Mick are absolutely adorable in it (I know, an odd word to use to describe rock icons, but just you watch it and tell me I’m wrong).

“Merry Go Round,” which follows, also has a cheerful, fun vibe, along with a good dose of soul. “She got me spinning round like a top/I just don’t know where it’s gonna stop/She took my hand, she took my heart/She took my wallet out in the park.” This track features more wonderful work from the saxophone players. Then some bluesy harmonica work by Frank Meade features at the beginning of “Love’s Around The Corner,” and there is more great work on harmonica halfway through. There is something quite catchy about this song, and it has an optimistic sense, though with some surprising lyrics in the second half: “The cost of living’s running high/The cost of dying going through the sky/The cats are waiting to be fed/I’ve got to change the sheets upon my bed.”

In addition to this new album, Chris Jagger has released an autobiography titled Talking To Myself, and on this album he has a song sharing that title, a song about writing his memoirs. It has a delicious, jazzy vibe, and some delightful stuff by Charlie Hart on piano and a wonderful lead by Frank Meade on saxophone. “I’m talking to myself/And anybody else/Who’s got ears to hear/Always found strength/From the unconscious sent/To help me through times I was blue.” This is one of my favorite tracks. Sure, a cynical ear could hear this song as a commercial for his book, with lines like “And the troubles I raised/And the good times we had/And how I nearly went mad,” but, whatever, it totally works. “Happy As A Lamb” also has a great jazzy sound, including some good work by Charlie Hart on piano. And, yeah, this song sounds as cheerful as its title, while acknowledging “It won’t last forever/But I’ll take what comes around.” And check out that lead on guitar. There is certainly a lot of talent on this album.

I think the pandemic has taught many people to not take things for granted, particularly to appreciate those people who are close to us – our friends, our family, our partners.  “A Love Like This” is a reminder to not take love for granted, and it too features an excellent and delightful lead on guitar. “Let’s take a trip/To Paris or Rome,” Chris sings here. Let’s hope the pandemic won’t keep us from being able to follow through on our travel plans, for we could all surely use a break. I love the joy in Chris Jagger’s vocals, and his performance helps me believe we will soon be taking those trips. But wherever we may be, we can put on this song and dance with that special someone.

This album includes two more songs inspired by Thomas Beddoes’ poetry. The first of those two is “Loves’ Horn,” this one coming from a poem titled “A Ho! A Ho!” There is the question of the placement of the apostrophe. In the couple of sites containing his poetry that I looked at, the line was written as “Love’s horn doth blow,” not “loves’ horn.” The change obviously changes the meaning, moving from either a single love or the general sense of love to multiple specific loves. An interesting change. This track features a seriously cool vocal performance by Chris Jagger. Charlie Hart plays accordion on this one, and John Porter is on mandolin, adding to the track’s very cool vibe. By the way, John Porter was also the mixing engineer for most of these tracks. That’s followed by the third and last track inspired by Thomas Beddoes’ poetry, “Wee Wee Tailor,” with lyrics taken from the poem “The Oviparous Tailor,” an odd title (but one that makes sense because of the line “May the thief lay eggs – but staler,” a witch’s curse). This song is a total delight, a playful and twisted number that features some great stuff on strings. Elliet Mackrell plays both viola and violin, and Charlie Hart plays violin on this one.

Chris Jagger then changes gears with “Hey Brother,” a moving number, his vocals supported by piano and viola. He opens it with the question, “Hey brother/Have you got a little minute to spare?” These days it seems we all lead such busy lives, not just rock stars, and it’s important to stay connected to family, while we still can. The album then concludes with “Too Many Cockerels,” a fun number that has an element of zydeco, with Charlie Hart on accordion. “Too many cockerels in the coop/Far more than the hen will need/Wife has said who’s got to go/Now who’s gonna do the deed?”

Mixing Up The Medicine was released on September 10, 2021 through BMG.

Posted by Michael Doherty at 12:38 PM