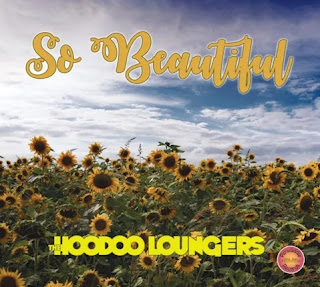 The Hoodoo Loungers are based in New York, but a lot of their inspiration seems to come from New Orleans. You can hear that influence, and that sense of fun and joy, on their new release, So Beautiful, the band’s third album. It features mostly original material, with three band members contributing songs. The band is made up of Dawnette Darden on vocals, David Deitch on keyboards and vocals, Douglas Dean on drums, Marvin Joshua on vocals, Dan Koontz on keyboards and vocals, Joe Lauro on bass, Michael Schiano on guitar and vocals, John Brierly on trumpet, Bob Hovey on trombone, Eric Kay on saxophone and clarinet, and Eric Miler on trombone. This album is full of positive vibes, which we desperately need these days. It is an hour of music to remind us of what the world can and should be.

The album gets off to a great and lively start with its title track, “So Beautiful,” in which they sing, “At least one thing on which we all can agree/Reach out to love and love will set you free.” Ah yes, sometimes it’s easy these days to forget that there actually are a few things on which everyone can agree. This track is a delight and will have you smiling. It is ridiculously positive and optimistic, but these guys are in earnest, and it isn’t long before you’re thinking yeah, it’s a beautiful world. Those vocals completely sell it, and of course it doesn’t hurt that there is a horn section. If the world is going to get better, a horn section will definitely have to be involved. Also, I dig that lead on keys. This song was written by David Deitch. “There’s a little bit of everyone in everyone.” The positive vibes continue with “Hoodoo Time Machine,” this one written by Dan Koontz. It’s a funky party, coming at you from the 1970s; after all, this song is about escaping. “Show the world that you don’t care what’s real and what is not/And you will see how happy you can be/When you leave reality in our hoodoo time machine.” In these days of dangerous misinformation, we might have mixed feelings about people not caring what’s real, but this is an incredibly fun song. Who wouldn’t want to go along with these guys and travel wherever their machine might take them? Besides, this song addresses those other people: “So many people can’t tell right from wrong.” And these musicians don’t want to take us too far back, after all, just to when Obama was president. Remember those days? Before things went completely wrong. Before we all turned into news junkies, reading about our own doom daily. Ah, if only someone could go back to 2015 and keep that racist megalomaniac from running for office, this world would be truly beautiful.

In “Get Ready For The Party,” they sing, “Nothing ever lasts forever/Nighttime always turns to day.” It’s good to remember when things seem dark, which is most of the time these days, that this too shall pass. This band tells us, “The party’s going to come/Get ready for the party/We’re going to have some fun.” I want to believe them, that at some point this pandemic will end, that at some point democracy will be safe from those who seem hell-bent on its destruction. This song, even if it doesn’t completely make a believer of you, will get you dancing, and that is certainly a step in the right direction. And yeah, it features more good stuff on keys. This one was written by Michael Schiano. It is followed by the first of the album’s covers, a completely wonderful rendition of “Careless Love.” This one certainly takes us to a different time, particularly the delightful work from the horn section. This album is like a time machine itself. Then the group gives us “Hit The Ground,” a fun, funky song that at first is about traveling the country in a VW Microbus, something that still sounds incredibly appealing. As fun as this track is, it, like most of this band’s material, has something to say. “And it’s hard to tell when you’re falling/‘Til you hit the ground.” And check out these lines: “This is the end of history/We’re going around the bend/We’re solving an ancient mystery/We know how the world will end.” This one was written by Dan Koontz.

The second of the album’s covers is “Yes We Can Can,” which written by Allen Toussaint, and made popular by the Pointer Sisters. This is another positive, optimistic, energetic, and encouraging number. “Now is the time for all good men/To get together with one another/And iron out their quarrels and their problems/And try to live as brothers/And try to find the peace within/Without stepping on one another.” It’s a huge task, granted, but we should be able to do it. Right? “I know we can make it work/I know we can make it if we try.” This track features an excellent, passionate vocal performance. And I love that guitar work. That’s followed by “Shake It, Quake It,” another fun number featuring some delicious work on piano. This song, written by Michael Schiano, is about dancing and moving. I am looking forward to the day when we can go dancing without worry about the pandemic. In the meantime, I will be dancing in my apartment, and this album is just the thing to have playing.

Things get seriously cool and jazzy with “Circe,” written by David Deitch. How can you not love a song that includes the word “sycophants” in its lyrics? These are the song’s opening lines: “It was midnight in the city, an icy wind did howl/Through the concrete canyon alleyways where the moonlight shadows prowl/And the sycophants and toadies caught favor with a muse/Who throws out inspiration to the cats who paid their dues.” This is a wonderful track, with an enchanting vibe fitting for its subject. It features both male and female lead vocals, the latter as the goddess Circe. That’s followed by “Fast And Loose,” a tune that will have you off your seat and shaking yourself like an electrified rag doll within fifteen seconds. Shake away your cares to this fun song. “She got a cute little face and a mighty fine caboose.” Then he admits, “I try to keep up but, man, it ain’t no use.” And I love that work on saxophone. Then we get the album’s third cover, a seriously cool rendition of “My Bucket’s Got A Hole In It,” a song made popular by Hank Williams. This version sounds like it’s coming from New Orleans of the past. There is so much joy here. It is a total delight, and it is followed by another playful song, “Watch Your Mouth,” written by Dan Koontz. This silly and fun song is about a mouth that seems to have a mind of its own: “It will say a lot of things you don’t want it to/It will kiss a lot of people that it should not do/It will cause a lot of trouble before it’s through.” It even features hand claps and a cha cha cha ending.

“Rockin’ The Mardi Gras” comes at us at a good clip, and is another enjoyable song about having a good time, this one taking us down to New Orleans and including nods to “Iko Iko” and “Hey Pocky Way” (two songs that Grateful Dead used to cover, by the way). This track also mentions some of the artists associated with that great city, such as Dr. John and Fats Domino. It was written by David Deitch. That’s followed by “Real, Real Gone,” which has a cheerful, loose vibe, and features another delicious lead on keys, as well as some great stuff on guitar. It was written by Michael Schiano. “Let’s get real, real gone for a change/No telling where we could get to/If we get going like I know we could.” Then we get the album’s fourth and final cover, a soulful rendition of “I’ll Fly Away” that begins as a slow gospel gem, then kicks in with a great joy. You’ll undoubtedly be singing along at home or in your car or wherever you are. This disc then concludes with “Another (Hunkered-Down) Day,” which has more of a pop vibe and reminds me of ELO’s “Mr. Blue Sky” (with a bit of a Beatles thing too). This is a song for these days of the pandemic, with lines like “It’s just another hunkered-down day/It’s just another day/It’s pretty much like yesterday/Because every day is just another hunkered-down day.”

So Beautiful is scheduled to be released on January 21, 2022 on Paradiddle Records.

Posted by Michael Doherty at 11:56 AM