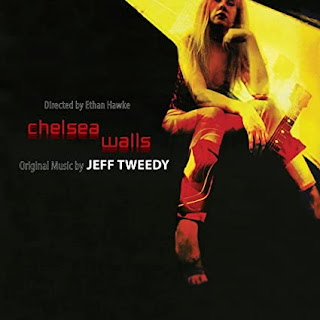 In 2001, Ethan Hawke, known for his work in films like Before Sunset and Boyhood, directed his first feature-length movie, Chelsea Walls. It featured Natasha Richardson, Rosario Dawson, Kris Kristofferson, Vincent D’Onofrio, Uma Thurman, and Robert Sean Leonard, with music by Jeff Tweedy (from Uncle Tupelo and Wilco).  The soundtrack was released in 2002, soon after Wilco’s Yankee Hotel Foxtrot. And now to mark its twentieth anniversary, it is getting reissued in an expanded edition, both on CD and as a double album on vinyl (for vinyl fans, it will be available in both black and yellow variations). The album features mostly original material, written by Jeff Tweedy, and performed by Jeff Tweedy and fellow Wilco member Glenn Kotche. There are also a couple of tracks featuring Wilco, and a couple performed by cast members of the film. This re-issue features two bonus tracks, and includes new liner notes, both by Ethan Hawke and Glenn Kotche, as well as an interview with Jeff Tweedy. The original liner notes by Ethan Hawke are also included.

The album begins with “Opening Titles,” which has a strange, haunting sound, quickly drawing us into its own peculiar realm. I haven’t seen the movie, but I am even more curious about it now listening to this soundtrack. This piece has an improvised feel, which makes sense, as Jeff Tweedy in the album’s new liner notes says the score was created by improvising while watching the movie. Its overall sense is like walking on broken glass without injury, as something stronger pulling us forward to it, and we ignore any pain as we become part of the strange landscape ourselves. At that point, it feels almost soothing, as an unexpected beauty surrounds us. Then “Red Elevator” begins with some solo guitar work, and when it kicks in, there is a gloriously raw vibe, like out of one of those twisted 1960s underground films. It is like a cry from the darkness of the city that pierces us and then somehow becomes a party, the kind where it is better to be out of one’s head than to witness too clearly what is taking place. There is that sort of excitement to it.

“Promising” is a song by Wilco, recorded in the mid-1990s, the first of the album’s tracks to feature vocals. It has a wonderfully wistful and dreamlike folk sound. “I promise you, and you promise me/Not to admit defeat.” There is something rather sweet about this song, in Jeff Tweedy’s vocal work and in the song’s overall sound. That’s followed by “Frank’s Dream,” which has an uncertain, hesitant feel at first, an interesting combination of piano and percussion. But it comes together beautifully toward the end. Jeff Tweedy plays piano on this track. Frank, by the way is played by Vincent D’Onofrio in the film.

In 1998, Billy Bragg and Wilco teamed up for the first Mermaid Avenue album, in which they took lyrics by Woody Guthrie and wrote their own music. A couple years later, they released Mermaid Avenue II, and then in 2012, they released the third volume, which included “When The Roses Bloom Again,” a traditional song about a soldier having to part from his sweetheart. That song is also included here. It’s a sad and yet hopeful song. That’s followed by a cover of John Lennon’s “Jealous Guy,” this done not by Jeff Tweedy, but Jimmy Scott (who, as I understand it, appears in the film). This is an incredibly moving jazz rendition, slow and passionate and honest and completely captivating. Jimmy Scott included a somewhat shorter version of this song on his 1998 album, Holding Back The Years. Then there is something magical and curious about “The Wallman, which features Glenn Kotche playing vibraphone.

Actors Robert Sean Leonard and Steve Zahn perform Wilco’s “The Lonely 1,” a song from that fantastic 1996 album Being There. Robert Sean Leonard, who starred with Ethan Hawke in Dead Poets Society, is on vocals, and, I believe, plays violin at the beginning. Both he and Steve Zahn play guitar. That’s followed by “Hello, Are You There?” This is a cool and somewhat hypnotic instrumental tune. Then we get a second song performed by Robert Sean Leonard, this time the old hymn “Softly And Tenderly Jesus Is Calling.”  Robert Sean Leonard is on both guitar and vocals. That’s followed by “Finale.” There is something kind of beautiful about this track, even in that repeated groove on guitar. It is gentle and strangely soothing, something you listen to and let your mind just drift off, a track to help you let go of whatever thoughts are plaguing you. Then we get “End Credits,” a totally delicious folk instrumental number with some really nice work on guitar. This is one of my favorite tracks, and it is how the original released ended.

This expanded re-issue includes two bonus tracks. The first is an extended version of “Finale.” The original version is eleven minutes, and this is thirteen. A difference is noticed right away, for this version includes what I assume is dialogue from the film at the beginning, and again a minute and a half in. This version feels more hypnotic. Some more dialogue is included at the very end. This disc then concludes with a different version of “Promising,” this one performed by Robert Sean Leonard. This version has more of a raw, immediate vibe, like he’s playing in his room, and we just happen to be there to hear it.

This special re-issue of Chelsea Walls is scheduled to be released on January 14, 2022 on Omnivore Recordings.

Posted by Michael Doherty at 6:52 PM