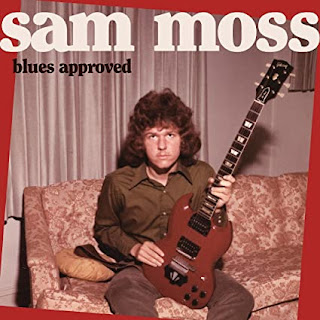 Last year, guitarist Sam Moss was honored on the Winston-Salem Walk Of Fame, both for his talent and for the influence his guitar store had on the local music scene. The store was a place where other musicians found inspiration as well as instruments, where they were mentored and soaked up some of the owner’s music knowledge and passion. That store closed in 2005, and Sam Moss died in 2007. But recently an unreleased Sam Moss album was discovered and is getting a release, so those of us outside that area will have a chance to appreciate this guy’s ability on the guitar, as well as his singing and songwriting. Most of the tracks on Blues Approved were recorded in 1977, and feature Mitch Easter on drums, though a few were recorded at later sessions. The songs are a mix of covers and original compositions. Chris Stamey, who produced and mixed this release, provides some of the liner notes for this disc, including biographical information. Mitch Easter also shares some memories about the 1977 sessions, which took place in his home. Musicians Henry Heidtmann and Jay Johnson talk about the later sessions, and Ed Bumgardner provides the rest of the liner notes, including the reason for the album’s title. The liner notes booklet also includes several photos.

The album opens with “Rooster Blood,” an original blues number with a good groove. Sam Ross plays bass in addition to guitar at the 1977 sessions. “You know you’re not bad-looking, baby/Good for talking to/You never let me down/Keep me up when I feel blue.” This track features plenty of good guitar work, of course. And the addition of Crispin Cioe on saxophone gives another layer to this totally enjoyable tune. That’s followed by another original song, “King Of My Hill,” with a slower groove and a good, soulful vocal performance. “Yeah, yeah, I’ll take some good, good whisky too/I’m going to take my guitar here, baby/But I’m not taking you.” This is such a cool track, one of my personal favorites of this release. “Nobody can touch me now/I’m the king of my hill.”

The first of the album’s covers is “Ain’t That Peculiar,” originally recorded by Marvin Gaye. This track wasn’t recorded during the 1977 sessions, but later, between 1989 and 1993, and features a full band, including backing vocals. Henry Heidtmann is on bass and piano, Jay Johnson is on drums, Mike Kennedy is on congas, and Mike Wesolowski on harmonica. There is a loose, fun vibe about this rendition, and Sam Moss delivers a strong vocal performance. That’s followed by “Vida Blanche,” written by Sam Moss. This song totally rocks. It has that great 1970s rock vibe, that delicious, youthful thing that I latched onto when I was growing up, with lines like these: “I tried my best to get into your mistress’s pants/But it seems she didn’t like my kind of romance.” And there is some great work on guitar here, and this track features the addition of saxophone. “I’d do it all again in a flash, babe, if I had the chance,” he sings just before the song starts to fade out. The album’s second cover is a totally fun rendition of “If You See My Baby,” the opening track from Mike Bloomfield’s debut solo record, It’s Not Killing Me. This is another from those later sessions, with a full band, this time with Ted Lyons on both drums and piano. It features some great stuff on guitar and harmonica.

One of the album’s best original tracks is “Trying To Do Better.” It has a smooth, cool vibe, an excellent vocal performance, and some nice changes. “I never know if one of us is crazy whether I should pack or stay/Said I’m trying to do better/Going to make a brand new start.” Would this have been a hit had it been released in 1977? I don’t know. I would have loved it then, and I love it now. Then “To Those Still At Sea” has more of a rock sound and drive, with another strong vocal performance. And check out these lines: “Wasting no time, leaving this madness/Come on with me/See what we can be/I lift my glass in a toast to those still at sea.” That’s followed by “My Man Mike” which has a delicious, kind of funky groove. Then “Nightflight Over Berlin” has a heavier blues rock vibe, led by some great work on guitar. This is an instrumental track. “PJ” is the last of the tracks from the 1977 sessions with Mitch Easter. It has a strong groove, and of course some nice work on guitar. A playful vocal approach makes this track fun.

A cover of Buck Owens’ “Act Naturally” comes from a rehearsal in 1967 by a group Sam Moss was in during his early teens called The Clique. That group was also made up of Jerry Lee on drums, Corky McMillan on bass and backing vocals, and Dale Smith on rhythm guitar. The sound may not be perfect, but it’s great to have this track included. You can hear how talented Sam Moss was on guitar already at that early age. The last three tracks on this release are all from the later sessions, and are all covers. The first is an unexpected delight, The Monkees’ “Pleasant Valley Sunday.” As I recall, this was my favorite Monkees song when I was really young (when I knew only the songs that were featured on the television series and hadn’t yet seen Head), and I still love it. Sam Moss delivers a surprisingly faithful rendition. Henry Heidtmann plays organ on this one. That’s followed by another interesting choice, an instrumental version of “Can’t Get Used To Losing You,” which was written by Doc Pomus and Mort Shuman, and recorded by Andy Williams. This disc concludes with a cover of The Rolling Stones’ “Who’s Driving Your Plane?” (a song that was originally the flip side to “Have You Seen Your Mother, Baby, Standing In The Shadow?”). Sam Moss delivers a seriously cool rendition, totally getting into the spirit of the song.

Blues Approved is scheduled to be released on CD on January 28, 2022 on Schoolkids Records. A vinyl edition will be coming out a little later this year.

Posted by Michael Doherty at 10:02 AM