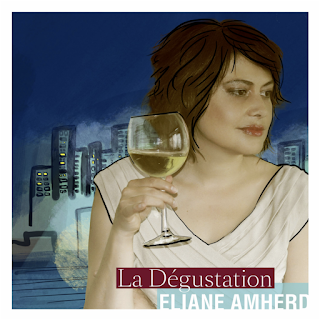 Singer and songwriter Eliane Amherd is currently based in New York, but is from Switzerland, and on her new release, La Dégustation, she finds inspiration in the wines of her native country. These songs are about different grapes, different wines, which in the lyrics are often personified, the wines becoming characters used to explore situations and culture, done in a playful way. Most of the tracks are originals, written or co-written by Eliane Amherd. Joining the singer and guitarist on this release are Amanda Ruzza on bass, Rosa Avila on drums, and Bashiri Johnson on percussion. Yes, a talented group of musicians. Amanda Ruzza has her own band, the Amanda Ruzza Group, and has played with Jill Sobule and Amy Lee. Rosa Avila has played with Andy Williams, Glen Campbell and Dawn Drake. Bashiri Johnson has recorded and performed with an incredible range of artists, including Miles Davis, Bob Dylan and Aretha Franklin. Eliane Amherd herself has worked with Randy Brecker, and is in a band called As Lolas. La Dégustation follows two other solo albums, Now And From Now On and Skylines.

The album opens with “Gamaret,” which has a funky element. Gamaret is a type of wine created in 1970, and the music finds some of its inspiration from that year, with references to Jimi Hendrix, both in the lyrics and in the guitar work. It’s a fun track, no question, and she playfully describes the wine, addressing it (and the grapes) directly: “You were meant to blend/Such a peppery tease/You’re so resilient/Standing your ground with ease.” That’s followed by “Humagne Rouge,” named after a wild, rustic wine. Her delivery here has a seductive quality to match lyrics like “with your dark smoky eyes,” and some of the lyrics are sung in French, which somehow is just inherently sexy. There is also something wonderfully playful here, as when she adds “shooby dooby doo” at one point. When she sings “I gave up that fight/To resist your charms/I was lost in your arms,” is she singing about a person or the wine, or both? The style of this track has something of a Santana flavor at times. Then “Heida” has a delightful vibe, and some great percussion. This grape is known by the name Traminer in Germany, and Eliane Amherd sings this one in German. I’m not sure what she’s saying here, but I love it all the same, and this track ends up being one of my favorites. This wine is said to have the power to make people ridiculously happy. I haven’t tried it, so I can’t attest to such a power, but I can promise you this song has that ability.

Eliane Amherd wrote the music for “Pinot Ou Fendant,” but the lyrics are by Pauline Lugon, who provides some guest vocals on this track. This one is sung in French, and has a pleasant, cheerful, friendly vibe, sounding like an outdoor gathering of friends on a sunny day. I’m not sure what they are singing here, as I don’t speak French, but this track makes me smile each time I listen to it. That’s followed by “Cornalin,” which has a cool, sly vibe at the start. The song’s lyrics apply both to the grape and a man, a man who is a lot of work but who proves himself in the end. Check out these line: “A spicy carefree son/Unruly and wild/An arrogant child/But somehow I always knew/If I took care of you/With time you’d grow and shine/And my vision would come true.” The wine’s purple hue is noted in the line “Royalty all the way.” Some of this track is sung in French, and yes, that section is sexy. We then go a white wine with “Petite Arvine,” which is sung in French. Her vocal approach here at first has an intimate, gentle style, like she is taking care of us. Perhaps we need some taking care of, eh? I love that guitar work during the instrumental section in the second half.

Then we get the first of only two songs not written by Eliane Amherd, “Johannely Fy,” which was composed by Connie Stadler and Speedy Jossen. This one is sung in German, and is about a tavern owner who supposedly added water to the wine, a grave sin. It begins with her voice supported by just bass, a cool opening. The song soon kicks in, with a delicious groove. There is a good, strong energy to this one, and I love that bass line. This track develops into a great, lively jam, and then ends with the final lines whispered over that groove, which is compelling, particularly as it comes after she belted out the previous lines with an incredible power. That’s followed by “Johannisbärg,” which is also sung in German. This track has a kind of sweet, light, relaxed and friendly vibe. Then “Lafnetscha” is a fun, bright song. It feels like a celebration, and likely will bring a smile to your face. “They all called him crazy/But Joe, he wasn’t lazy/He took his time with this sour wine/And made it fresh and so divine.”  This track contains more excellent work on bass, and there is a cool section with some scat and great percussion. Part of this song is sung in German. The final of the album’s tracks dedicated to wine is titled “Santé,” and is simply the sound of a glass being poured, this track functioning as a separation between the main section of this album and the final three tracks.

The final three tracks come under the heading “Quarantini Time,” songs related to the pandemic. The first is titled “Flee Flailing,” a song about life during the time of isolation. Here is a taste of the lyrics: “I got hours to spare/Blending days/Stuck in place/Slowing pace/Going nowhere.” And don’t worry, for it still mentions wine (didn’t we all drink perhaps a bit much during the lockdown early in the pandemic?): “Quarantine/Drinking wine/Feeling fine/Most of the time/Waiting for better days.” The song has an easygoing vibe to match the pace of life in isolation. That’s followed by the second of the album’s two songs not written by Eliane Amherd, “Voyage Voyage,” which is by Dominique Albert Dubois and Jean-Michel Rivat. During a time when travel was basically impossible, or at least ill-advised, many of us took voyages in our minds, through music and dreams. This one is sung in French. The album then concludes with a short track titled “Quarantini,” because of course we should make an alcoholic drink out of this horrid pandemic. Who didn’t stock up on alcohol at the beginning of this thing? This is a playful tune, featuring some wonderful guitar work. Here are the lyrics: “Happy hour just went sour/Everything has gone down the drain/The city that never sleeps is taking a nap/But we don’t complain/Smooth your troubles with vermouth/Use vodka or some gin will do just fine/Then hook up with your friends online/It’s quarantini time.” Ah, yes. Cheers, everyone!

Posted by Michael Doherty at 12:08 PM