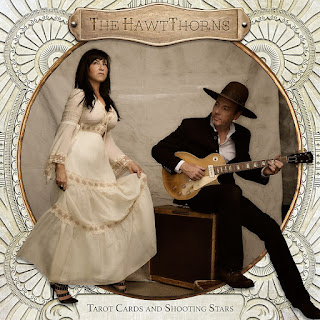 The HawtThorns released their first full-length album, Morning Sun, in 2019. At that point, the husband-and-wife duo was based in Los Angeles, and even had a great song about the 405 freeway (which you can hear on that album). Since then, they’ve relocated to Nashville, and now are putting out their second album. Titled Tarot Cards And Shooting Stars, it features mostly original material. Both KP Hawthorn and Johnny Hawthorn provide the vocals and play guitar (though it is KP who takes lead vocal duties), and KP also plays keyboards, percussion and mandolin. Joining them on this new album are Matt Lucich on drums, Eliot Lorango on bass, Kaitlin Wolfberg on strings, and Sasha Smith on keyboards.

The album kicks off with “All The Right Reasons,” written by KP Hawthorn and Debbie Hennessey. It has a catchy pop sound, with a nostalgic vibe and a memorable main line, “You had all the right reasons for doing me wrong.” And check out these lyrics: “No one ever tells you/‘Cause no one really knows/How to play the game/You learn it as you go.” This song is apparently going to be released as a single too, so keep an ear out for it. “All The Right Reasons” is followed by “On The Way,” the song from which the album gets its name. “Tarot cards and shooting stars can’t say/Whether we should try to break away/Or stay the course to run another day.” This country tune features some great work on guitar and has a good, positive bent that is tremendously appealing. We would all like to hear someone tell us, “you’re right where you belong.” This one was written by KP Hawthorn and Johnny Hawthorn.

“Let’s Get Together” is a good song about seizing the moment and enjoying the present. Here are some lines that stand out for me: “I don’t feel like digging up the past today/It’s such a waste/I don’t need to see the future/Because I know what’s happening/It’s just tomorrow/It’s going to happen anyway.” And of course these lines have a certain appeal: “We’re over the bad times/Look back with no regret.” This one was written by KP Hawthorn, Johnny Hawthorn and Steve Berns, and has a joyful energy during the chorus, and a certain amount of soul at other moments. “Let’s get together/Hard days won’t last forever.” This song too is going to be released as a single. That’s followed by the album’s only cover, Neil Young’s “Lotta Love,” a song from his 1978 LP Comes A Time. This song seems perfect for our strange times, doesn’t it? Particularly because of these lines, which open the song: “It’s gonna take a lot of love/To change the way things are/It’s gonna take a lot of love/Or we won’t get too far.” It’s difficult to keep that in mind at times, particularly as we don’t see “eye to eye” with nearly half the country, and those folks don’t seem ready, or even able, to listen to reason. It is going to take a whole lot of love, indeed.

“Baby It’s A Gift” is a beautiful song, featuring an excellent vocal performance from KP Hawthorn. Check out these lines: “But hey, look at everything we’ve got instead/Baby, it’s a gift/The pain and the struggle/Push through the trouble/It gives us more than we know/Maybe this is it/Learning as we go/To become better people along this crazy road.” It’s probably best for our mental well-being to adopt this attitude. Of course, it’s difficult, but listening to this music makes it seem possible. Let’s do our best, and hold onto each other along the way. This is one of my personal favorite tracks. It was written by KP Hawthorn, Emily Bell and Shane Alexander. Then “Keep It Alive” has a bright, strong sound right from its opening moments. “Dreams never die/They only grow cold/So remember to hold on/And keep them alive.” During the chorus, this song feels like an anthem, and you might find yourself singing along. This one was written by KP Hawthorn. Then “One Human At A Time” features another beautiful vocal performance by KP Hawthorn. “I have friends on every side,” she sings. “Good people, crazy people, angry people, and lonely people.”

“Get me off this roller coaster/Tell me that we’re going to be all right,” KP sings as “This One Is Ours” begins. Now there is a sentiment, a desire most of us share. There is a joy to this song’s rhythm, and a positive bent to its sound. It’s a song designed to raise our spirits, and not only that, but make us active. “At the end of the road there’s a sign says keep going if you dare.” And check out these lines: “Somewhere between aiming high and laying low there’s got to be a place/Where the radar cannot find us/And no one cares if we’re from outer space.” This one was written by KP Hawthorn, Johnny Hawthorn and Steve Berns, and is another of the disc’s highlights. That’s followed by “The One That Got Away,” a pretty song, their voices blending so sweetly. “I thought if I could make you see/That we’re just travelers/And all of this means nothing in the end/I could be your friend.” This is yet another of my favorites. It was written by KP Hawthorn and Johnny Hawthorn. There is always something appealing in lines like “Let’s get in my car and drive/We’ll let the interstate decide.” The album then concludes with another beautiful song, “When Georgia Cries,” which features a passionate, moving vocal performance and some gorgeous work on strings. “And all the answers that I need/Are getting lost inside a dream/But I could wake up anytime.”

Tarot Cards And Shooting Stars is scheduled to be released on February 25, 2022 on Mule Kick Records.

Posted by Michael Doherty at 5:20 PM