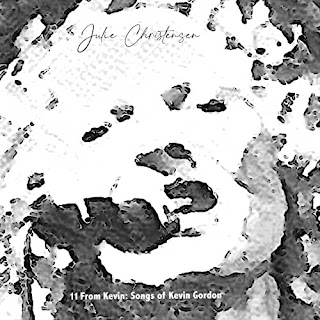 Julie Christensen is known for her work in Divine Horsemen and The Flesh Eaters, but I fell in love with her voice through her work with Leonard Cohen. She and Perla Batalla sounded so great together backing him (you can hear them on the 1994 release Cohen Live), and I was lucky enough to attend “A Leonard Cohen Evening” back in 2006, at which they performed (that was also the night I met Leonard Cohen, so a very special evening indeed). In 2019, The Flesh Eaters released I Used To Be Pretty, that band’s first new album in fifteen years. And now Julie Christensen is releasing a new solo album, 11 From Kevin: Songs Of Kevin Gordon. Kevin Gordon is a singer and songwriter from Louisiana who began his career in the early 1990s. Songs of his have been recorded by Irma Thomas and by Keith Richards with The Band. Julie Christensen recorded his song “Saint On A Chain” with her band Stone Cupid, including it on that band’s The Cardinal album. Sergio Webb and Chris Tench, who played on that album, join Julie Christensen on this disc, along with Chris Benelli on drums, and Gregory Boaz on bass.

The album opens with “Find My Way,” a song from Kevin Gordon’s 2005 album, O Come Look At The Burning. Julie Christensen delivers a moving and passionate vocal performance, as you’d expect. There is something both beautiful and raw in her delivery, which is fitting. “No destination, no woman waiting/Just a rage inside my mind/I’m feeling things I don’t understand/Baby, can you sympathize/’Til I find my way.” I’m guessing these lyrics will speak to a lot of folks these days, as well as the line “World’s got me crazy.” That’s followed by “Crowville,” on which Julie Christensen plays guitar as well as sings. This is a rather pretty, mellower track, with a kind of dreamlike vibe. Here is a taste of the lyrics: “From out in the field, outside the wall/Coyotes coming, hear ‘em call/Running on hunger and free will/Gone in the morning/Crowville.” This song was included on Kevin Gordon’s 2015 release Long Gone Time.

I love the slow, haunting vibe of Julie Christensen’s rendition of “Fire At The End Of The World,” a song that originally comes from 2018’s Tilt And Shine, the same album that includes “Saint On A Chain.” “Around here things stay pretty slow/Hound dogs sleep in the middle of the road/Gotta shuck the oyster to find the pearl/And I heard about a fire at the end of the world.” This track features a cool bass line, and some good work on guitar, but it is her voice that is the focus here. She inhabits the world of this song, relating its story to us with ease and honesty, not trying to sell it to us but just present it. “Sometimes you just want things to tilt and shine/Change it up a little bit inside your mind.” Indeed. This is a fantastic song, one of my personal favorite tracks. That’s followed by “Joey And Clara,” which has a sweet, easygoing folk and country sound that is soothing. Sergio Webb plays banjo on this track. This track makes me smile every time I listen to it. “Joey And Clara” was included on Kevin Gordon’s Salvage & Drift Vol. 1.

“Gloryland” has more of a blues rock edge. Julie Christensen plays electric guitar on this track and gives a powerful, passionate vocal performance. This song does not hold back. Check out these lines: “You might be the president/Take a lot of power in your hands/Bend the laws to your advantage/Drive your armies to a foreign land/You say your cause is just/Lie only if you must/Just to keep them believing/They’re on their way to gloryland.” I especially love the way Julie delivers the lines “You say your cause is just/Lie only if you must.” So good. This song is the title track to Kevin Gordon’s 2012 album. The album then gets into country with Julie Christensen’s rendition of “Heart’s Not In It,” which has that great, sad, pensive country sound. I love the way she delivers it. This song was included on O Come Look At The Burning. On this album, it leads directly into “Down To The Well,” the title track from Kevin Gordon’s 2000 release. It’s an interesting transition, as the pace picks up a bit and the music gathers more energy. Also, since this track contains two songs, shouldn’t the title of this album be 12 From Kevin? Anyway, these two songs do share some thematic elements. “Heart’s Not In It” opens with the line “I’ve played this bar a hundred times”, and in “Down To The Well,” she sings, “You played that dive twenty some-odd years.” (By the way, Lucinda Williams sings that line on the Kevin Gordon recording.) I dig the bass line of “Down To The Well.” That’s followed by “Jimmy Reed Is The King Of Rock ‘n’ Roll,” a cool, slow, bluesy number, this one also from Kevin Gordon’s Down To The Well. “You lose your mind ‘til it can’t be found/Now your head is burning/Your heart is yearning.” There is some gorgeous work on this track.

There is a bluesy element to “Gatling Gun,” with a somewhat haunted aspect to its sound. Like all these songs, this one has some memorable lyrics, particularly lines like “Keep sinking low ‘til I come out on higher ground” and “I could take a razor to my blank stare/Bleed out every memory of her in there” and “These days nothing stays the same/But my tongue remembers the shape of her name.” I especially love that last line. And I love the way this one builds. Then Brent Moyers joins Julie Christensen on trumpet for “Following A Sign,” a song from Long Gone Time, where it is titled “Following A Sign (The Preacher’s Wife)” and listed as a bonus track. This song features yet another excellent and moving vocal performance from Julie Christensen.  That’s followed by “Goodnight Brownie Ford,” also from Long Gone Time. This song paints a vivid portrait of Brownie Ford, recounting the time when Kevin Gordon met him. This song offers a goodbye. Brownie Ford died in 1996 at the age of ninety-two. “Declared me dead twice, he said/But I never was that far gone.” Karen Hammack plays piano on this track. The album concludes with “Rest Your Head,” from Kevin Gordon’s Tilt And Shine. This is a pretty and sweet rendition. I think we can all relate to lines like these: “Work is good but wants to steal away our time/Hours and frustrations lead to nothing but/Paper dollars and thin dimes/It’s here and then it’s gone/So we labor on.”

11 From Kevin: Songs Of Kevin Gordon is scheduled to be released on January 21, 2022 (which also happens to be Julie Christensen’s birthday).

Posted by Michael Doherty at 12:08 PM