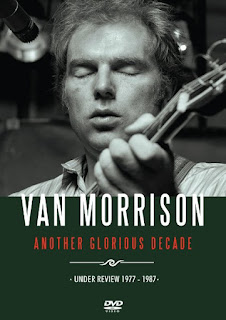 Van Morrison: Another Glorious Decade Under Review 1977 – 1987 is a documentary and follow-up to 2008’s Van Morrison: Under Review 1964 – 1974. The film is narrated by Thomas Arnold, and obviously focuses on Van Morrison’s career in the late 1970s and 1980s, a time when his music went through quite a few changes. As Thomas Arnold says at the beginning, “he embarked on a journey in which he sought to find independence as an artist, and explore spirituality in his music.”

Van Morrison didn’t take part in this documentary, so there are no new interviews with him. There are, however, snippets of interviews he did in 1986 and 1987, in which he talks about songwriting, the music industry, touring, and the themes in his music. There are also interviews with several music journalists, including Nigel Williamson (Uncut Magazine), Anthony DeCurtis (Rolling Stone), Gavin Martin (NME) and Chris Welch (Melody Maker). Anthony DeCurtis talks about how Van Morrison “distinguished himself as a singer. The instant you heard Van Morrison, you knew exactly who it was.” There are also interviews with Keith Altham (Van Morrison’s former publicist) and Gary Ladinsky, who was the engineer on A Period Of Transition (and who uses the word ordeal in an odd way), as well as with musicians Pee Wee Ellis and Chris Hayes. Pee Wee Ellis was Van Morrison’s musical director from 1979 until 1985. Chris Hayes (whom you likely know from his work with Huey Lewis And The News) played guitar on Beautiful Vision.

Though the film focuses on the albums A Period Of Transition (1977) to Poetic Champions Compose (1987), it does give a bit of Van Morrison’s earlier history at the beginning, including mention of Them, plus a bit of his early solo career. It also goes into 1974’s Veedon Fleece, and how its lower sales led to a three-year absence just before A Period Of Transition, and how an appearance in The Last Waltz led to a friendship with Dr. John, who worked with him on the 1977 record. The film then goes in chronological order from album to album, with those interviewed also discussing Van Morrison’s personality and the spirituality of his music.

When reaching 1983’s Inarticulate Speech Of The Heart, the camera focuses on a line on the back of the record sleeve: “Special thanks to L. Ron Hubbard.” But the film doesn’t delve too much into any association that Van Morrison might have had with that man or with the insane cult of Scientology. A little later one of the men interviewed does talk a bit about how Van Morrison was on a spiritual journey at the time, and so he looked into Scientology and other groups as a result of spiritual pain. I would have liked a little more information there (and in some other areas).

The film does include some concert footage, including bits of performances of songs like “Street Choir,” “Bulbs,” “You Gotta Make It Through The World,” “Wavelength,” “Checking It Out,” “Bright Side Of The Road,” You Know What They’re Writing About,” “Summertime In England,” “Spirit” and “In The Garden.”

The DVD includes You Know What They’re Talking About: Van Morrison And The Music Press, which includes more from interviews with Nigel Williamson, Keith Altham, Chris Welch and Anthony DeCurtis, who talk about their personal experiences with Van Morrison. This feature is approximately seventeen minutes.

There are also brief biographies of those interviewed in the film.

Van Morrison: Another Glorious Decade Under Review 1977 – 1987 was directed and edited by Elliot Riddle, and is scheduled to be released on DVD on September 18, 2015.
Posted by Michael Doherty at 6:28 PM