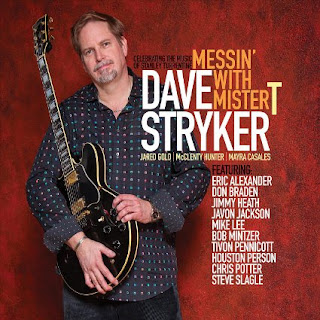 Jazz guitarist Dave Stryker's newest release, Messin’ With Mister T, is a tribute to saxophonist Stanley Turrentine, whose nickname was Mr. T (so no, this is not about messing with B.A. Baracus). Dave Stryker toured with Stanley Turrentine for more than a decade, and also recorded with him, appearing on T Time, which includes a Stryker composition, “Side Steppin’” (a tune that is also included on this release). Stryker is backed by an excellent group of musicians – Jared Gold on Hammond B3 organ, McClenty Hunter on drums, and Mayra Casales on percussion. And then he has special guests joining him on saxophone for each track. There is a tremendous amount of joy put into this project, and perhaps even more coming out of it.

The CD opens with “La Place Street,” one of my personal favorite tracks. This is a tune that was written by Stanley Turrentine, and this version features Houston Person on tenor saxophone. I love the fun mood of this piece, and the wonderful groove, and Stryker, Person and the rest really nail it, while certainly adding their own touches. I love the way the saxophone and guitar converse early on, before the saxophone asserts itself and takes a great lead. There is a whole lot of soul to this recording, as there should be. And of course Dave Stryker does some absolutely delightful stuff during his lead on guitar.

It’s followed by “Pieces Of Dreams,” which was written by Michel Legrand. This version features Mike Lee on saxophone, and at the end includes a little nod to “Up, Up And Away” on guitar (you know the tune, “Wouldn’t you like to ride in my beautiful balloon?”). “Don’t Mess With Mister T,” the album’s title track, was written by Marvin Gaye and included on his album Trouble Man. Stanley Turrentine recorded it and used it as the title track to an album a year later. The version here features Don Braden on saxophone, and he does a wonderful job with it. Jared Gold also adds some excellent work on organ. This track is one of the highlights.

This rendition of “In A Sentimental Mood” begins with some sweet work on guitar by Dave Stryker before Jimmy Heath comes in on saxophone. And then it becomes gorgeous and moving. I’ve always loved this composition, which was written by Duke Ellington, and this is a really good rendition, another highlight of this CD, mainly because of Jimmy Heath’s playing. And all the musicians really shine on John Coltrane’s “Impressions,” this version featuring Chris Potter on saxophone. I love McClenty Hunter’s work on drums here (even long before his solo), and some of what Dave Stryker does on this track is absolutely fantastic. There is also a cool lead part on organ by Jared Gold.

Besides being called Mr. T, Stanley Turrentine was also known as The Sugar Man, which was the title of a 1970s release. He also put out a record titled Sugar in the 1970s, and a version of that album’s title track, which was written by Turrentine, is included here. This version features Javon Jackson on saxophone (you probably know him from his work with The Jazz Messengers). It’s a few minutes shorter than the Turrentine original, but is a very cool rendition, featuring some excellent work on guitar.

As I mentioned, Dave Stryker’s “Side Steppin’” is included on this album. It might seem a bit odd, because it’s like Dave Stryker covering Stanley Turrentine covering Dave Stryker. But whatever, it's a groovy track, and it features Steve Slagle on saxophone. The album then concludes with another Turrentine composition, “Let It Go,” with Tivon Pennicott on saxophone.

CD Track List
Messin’ With Mister T was released on April 7, 2015 on Strikezone Records. By the way, Dave Stryker also plays on the recent release by Steve Johns, Family.
Posted by Michael Doherty at 11:39 PM