Pugwash: “Play This Intimately (As If Among Friends)” (2015) CD Review 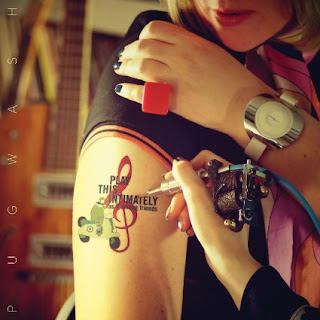 Irish pop band Pugwash has been around for more than fifteen years, and amazingly none of their studio albums have been officially released internationally. Until now, that is. Omnivore Recordings is releasing Play This Intimately (As If Among Friends), the band’s new album, giving a wider audience a chance to enjoy this great band. Last year Omnivore put out a collection of Pugwash material titled A Rose In A Garden Of Weeds: A Preamble Through The History Of Pugwash. That functioned as my personal introduction to the band, and I assume helped quite a few other folks in the United States get caught up, and also prepared us for this new album. All of the tracks on this CD are originals, written or co-written by lead singer and guitarist Thomas Walsh. And this album boasts some impressive guest musicians, such as Ray Davies and Jeff Lynne.

The new CD opens with “Kicking And Screaming,” a good rock tune that sounds a bit like The Monkees’ “(I’m Not Your) Steppin’ Stone.” There’s a positive bent to the song, with lines like, “’Cause hate’s stopped living in my mind/I ran it out/I dragged it out/Kicking and screaming/On its knees.” (By the way, the lyrics are printed in the liner notes, and “its” is mistakenly printed as “it’s,” a common error.) Jeff Lynne makes a guest appearance on this track.

“Lucky In Every Way” is a delightful pop song. The lines that stood out the first time I listened to this disc are: “I’m so lucky I found her/Even though I stopped looking.” Nice, right? This song has some wonderful harmonizing, and one section brings to mind the Beach Boys. “Feed His Heart With Coal” is an unusual pop song about a train, with some interesting changes.

Neil Hannon appears on several tracks, including “Just So You Know,” on which he plays Fender Rhodes piano. Neil Hannon has played with Pugwash before, appearing on Eleven Modern Antiquities. You might also know Neil from his work with The Divine Comedy, which provided the music for the television series Father Ted. “Just So You Know” has a really good mellow vibe. “And though my heart is in June/My head is in December.” There is something beautiful in both the vocal delivery and the instrumental section. And then “Clouds” is kind of delightfully cheesy at times. Neil Hannon plays Farfisa rhythm box on this one. “Clouds” also features Noel Langley on flugelhorn, and Alan Redmond on backing vocals.

“You Could Always Cry” is one of my favorites. It’s a lot of fun, coming at you at a great, quick pace, with a good rhythm to get you dancing. I dig Shaun McGee’s work on bass. And like all of this band's tracks, the vocals are excellent. “And one look from you doesn’t mean I’ll break.” Neil Hannon plays piano on this track. That’s followed by another of this disc’s most fun tracks, “Hung Myself Out To Dry,” which also features Neil Hannon on keys. I love this song, and you can really hear the ELO influence at times in the vocals, like on the line “As I look for my future today.” I like these lines: “The past was my present future/I didn’t want to be a loser/When looking for love.”

“Silly Love” reminds me a bit of Paul McCartney, and not just because of the title. This one was written by Thomas Walsh and Tosh Flood. Here is the chorus: “Silly love/Silly love/Won’t you come in/So you can run down from my eyes/Fall upon the ground/And sew all the seeds around.” It is followed by “Oh Happy Days,” the track that features Ray Davies on backing vocals. Andy Partridge (from XTC) also provides backing vocals, and Noel Langley is on flugelhorn, and Neil Hannon plays both banjo and piano on this one. This is another of my personal favorites. It has this sweet, happy vibe that is really effective.

Play This Intimately concludes with “We Are Everywhere,” a kind of trippy number that features Neil Langley on trumpet. “Dandelion seeds parachute in the air/Then by the morning the dawn will declare/We are everywhere.”

CD Track List
Play This Intimately (As If Among Friends) is scheduled to be released on CD on September 4, 2015 through Omnivore Recordings. It will also be available as a limited edition on translucent red vinyl. By the way, Pugwash is going to be touring the United States to support this CD, that tour beginning in just a few days.
Posted by Michael Doherty at 3:52 PM